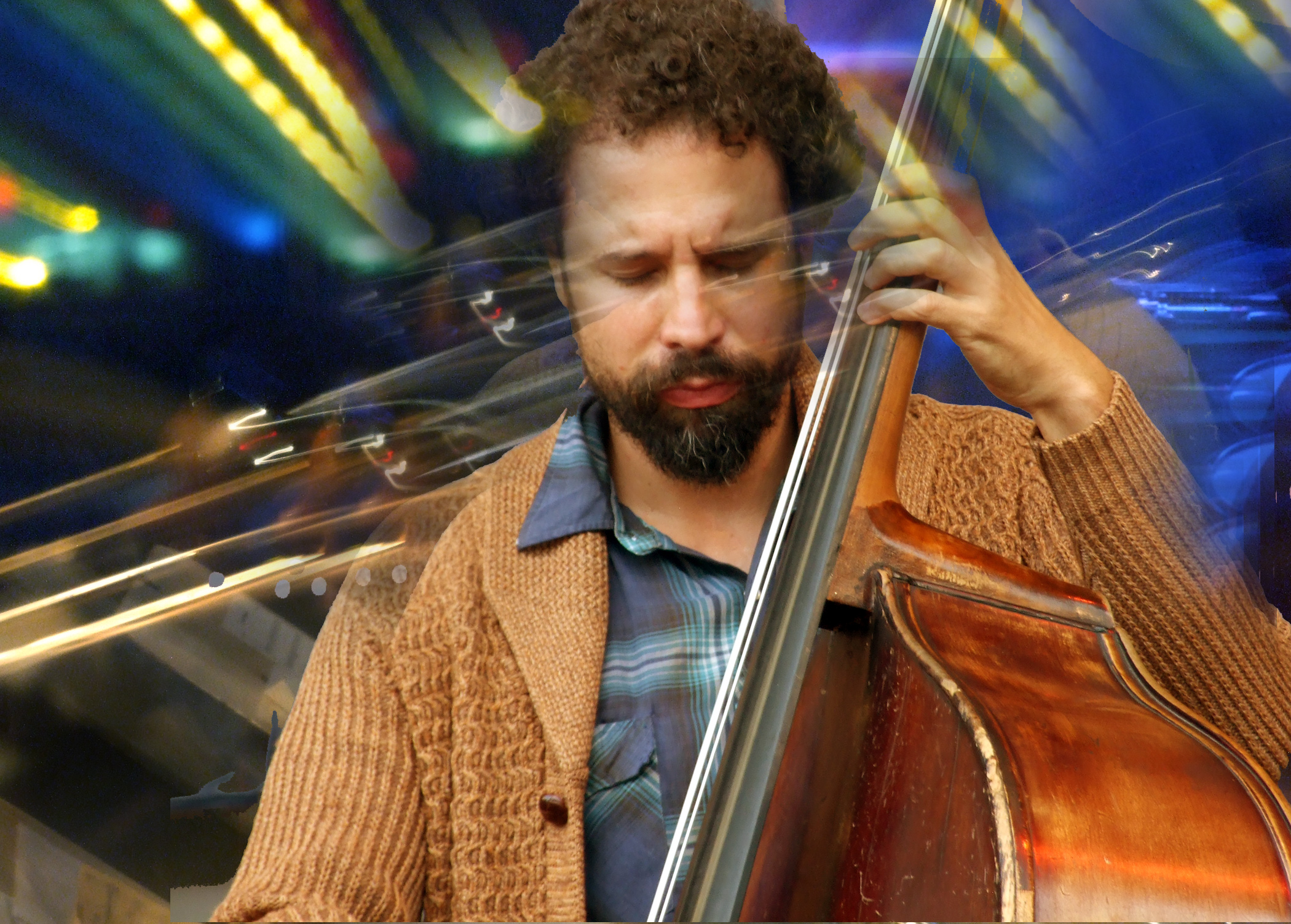 BY ZIVIT SHLANK JAZZ CORRESPONDENT Bassist and composer Joshua Abrams is truly mad musical scientist. His hypnotic brand of sonic invention, has been hailed by critics and designated by fans as occupying the forefront of the “post-everything” musical era. His explorations draw from many musical sources from indie rock and electronic, to modern jazz and hip-hop idioms, while infusing eclectic and indigenous world styles. Originally from Philadelphia, he’s been in Chicago for over 15 years and is quite ubiquitous on Chi-town’s improvised music scene. His countless collaborations as well as his own groups Town & Country and Natural Information Society, among others, span genres and prove he’s quite the musical chameleon. Thanks to Ars Nova Workshop, we Philadelphians have a rare opportunity to welcome back Abrams and drummer Chad Smith, in an intimate duo performance (for free!!) tomorrow night at The Rotunda at 8pm. Phawker recently chatted with Abrams via electronic mail…

PHAWKER: It all comes back to that first record. Do you recall the first song or artist that propelled you to pursue music?

JOSHUA: Hearing John Coltrane’s A Love Supreme and Thelonious Monk’s Live At The Five Spot as a young person made a strong impression. Covering A Tribe Called Quest’s “Scenario” at the intersection of 5th and Passyunk with Ahmir Thompson, Tariq Trotter and about twenty other mc’s pretty much sealed the deal in the summer of ’92.

PHAWKER: You’re originally from Philly and as you know already, the city has a rich musical legacy. How has that influenced you?

JOSHUA: I was fortunate to have studied with 3 great bass players from Philadelphia: Gerald Veasley, Tyrone Brown and Neil Courtney. Around age 16 or 17, I managed to sneak into Ortlieb’s to hear drummer Mickey Roker, Arthur Harper and many others. I recorded at Sigma Sound when I was 18. That was an amazing brush with history. Jimmy Garrison, Jymie Merritt, the Legendary Hasaan, Odean Pope, Khan Jamal, obviously John Coltrane and McCoy Tyner, Tuff Crew, Schooly D, Gamble and Huff all have been inspiring to me through their recordings. This list is by no means comprehensive.

PHAWKER: I know you’ve worked alongside legendary figures of the AACM and Art Ensemble of Chicago, Roscoe Mitchell and the late Fred Anderson. Let’s backtrack, here. What initially drew you to the Chicago music scene?

JOSHUA: I went to Chicago to go to school. I found that Chicago’s music community itself was the real school. In Chicago it was possible to work as a musician and one could play with older and more experienced musicians. I gravitated in particular to the scene surrounding Velvet Lounge and the late great Fred Anderson. Fred was one of the most realized musicians I have known. I would strongly recommend his music to anyone. Hamid Drake and Jeff Parker have both been great friends and mentors to me. I met Chad Taylor in Chicago around 1994 and we have been playing music together since. Sticks and Stones, Town and Country, Lyn Halliday, Ron Dewar, Rob Mazurek, Bobby Broom, David Boykin, Nicole Mitchell, Robert Barry, Jim Baker, Avreeayl Ra and Mike Reed all come to mind as individuals and bands that have affected my outlook through making music together. Every chance I have had to work with Roscoe Mitchell has been a profound experience though I don’t think he has lived in Chicago since the 70’s.

PHAWKER: No doubt you pride yourself on being more than just an experimental jazz musician. You’re also well versed in many styles including hip-hop (The Roots’ debut album Organix), folk rock (Will Oldham aka Bonnie “Prince” Billy) and electronic settings. How have you synthesized all that into the sound you’re pursuing w/ your latest CD, Natural Information? Or are you striving for something entirely different?

JOSHUA: The music centers itself around the guimbri, a three-string lute of the Gnawa people of Morocco. It is often used for trance and healing ceremonies. I have tried to write music that places the instrument in different sonic landscapes yet retains its hypnotic qualities. The music is propulsive but it unfolds slowly, almost like riding a train cross-country and watching the landscape transform before you.

PHAKWER: What can the audience expect from tonight’s duo performance w/ drummer Chad Taylor at The Rotunda?

JOSHUA: Music that is oriented around the acoustic bass, guimbri, drums and mbira. Music that is hypnotic and unexpected, both composed and spontaneous. Music that is expansive using minimal means of reaching the destination.