PAUL DAVIES: I’m not a fan of casinos, regardless of the design. It is a bad, insidious business that preys on vulnerable people who can least afford to waste their money. But I was curious to check out the first casino in the poorest, big city in the country. While the outside didn’t grab me, the inside was even more depressing. Row after row of slot machines were dotted with people slouched in seats aimlessly pushing buttons. Most gamblers appeared to be over 50. Several had canes. A heavyset woman wheeled around an 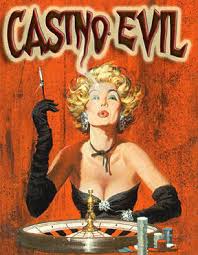 oxygen tank with tubes going to her nose. One man had a lanyard around his neck with a card plugged into the slot machine. There’s nothing more pathetic than seeing a person literally tethered to a one-armed bandit. […] Sure, the state is raking in tax revenue from the casinos. In its first week in business, SugarHouse took in almost $5 million, with about half going to state coffers. And Pennsylvania is capturing tax dollars that were going to Atlantic City and elsewhere. But now that the casinos are close to home, gamblers will come more often and new addicts will be created. The string of adults who have abandoned kids in cars outside another area casino underscores the lure of the casinos. This problem will become more acute in Philadelphia, where there is a large concentration of poor and elderly people struggling to get by and desperate for a financial miracle. Here’s just one snapshot: A coworker of mine went to SugarHouse on Wednesday night. A stranger approached her in the ladies room offering to sell the ring off her finger. All the casino investors and supporters should remember that sad scene as they tally up the profits they are raking in. MORE