[WARNING: Graphic content.]
[Photo Source: BOSTON GLOBE]
EDITOR’S NOTE: Let the record show that Phawker has no dog in this fight. We are posting these pictures [CLICK TO ENLARGE] as neutral observers of the Israeli-Palestinian conflict because we believe that sanitized reportage of conflict is a gross distortion of reality that only serves to enable conflict to persist. Setting aside for a a moment the convoluted tit-for-tat that stretches all the way back to 1947 and serves as the bloody preamble to what is happening right now, the chain of recent events goes something like this: enraged by Israel’s very existence and continued economic blockade of the Gaza Strip, Palestinian militants have been firing low-impact, short-range Qassam rockets and mortar shells into Israeli border towns — upwards of 200 rockets a day — for going on eight years, staging these attacks from inside dense civilian population centers in Gaza. Come Christmas, Israel responded with overwhelming firepower in a week-long bombing campaign that has killed upwards of 400 Palestinians and injured another 650, followed by a ground invasion that commenced last night. The U.N. estimates that 20% the 500 Palestinians killed in the conflict are women and children. What happens next is anyone’s guess, but this much is certain: The war of spin being waged by both sides in the global media cannot be allowed to blur the central fact of this current conflict — while it was Israeli bombs that killed those Palestinians pictured above, it was Hamas who lit the fuse.

WIKIPEDIA: What Is ‘Eyeless in Gaza’? 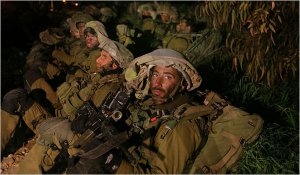 GIDEON LEVY: They liquidated Nizar Ghayan? Nobody counts the 20 women and children who lost their lives in the same attack. There was a massacre of dozens of officers during their graduation ceremony from the police academy? Acceptable. Five little sisters? Allowed. Palestinians are dying in hospitals that lack medical equipment? Peanuts. Whatever happened to the not-so-good old days of Salah Shahadeh? When we liquidated him in July 2002, we also killed 15 women and children. At least back then, moral qualms were raised for a moment. Here lie their bodies, row upon row, some of them tiny. Our hearts have turned hard and our eyes have become dull. All of Israel has worn military fatigues, uniforms that are opaque and stained with blood and which enable us to carry out any crime. […] The suffering in the south renders everything kosher, as if the horrible suffering in Gaza pales in comparison. Everyone is hungry for revenge, and that hunger is excused by the need for “deterrence,” after it was already proved that the killing and the destruction in Lebanon did not achieve it. Yes, I know, war is war. After all, they brought this on themselves. They are a terrorist organization and we are not. They want to destroy us and we seek peace. Still, is there nothing here that will stop this blood pipeline? MORE

NEW MEDIA WAR: Souktel, an organization in Ramallah that is known for its SMS-job matching service

connecting Palestine youth with work, is running a Palestinian “SMS Blood Bank” program for the Red Crescent.This two-way messaging system lets Red Crescent staff send out mass appeals for blood donations, and hear back from donors if needed.  The Red Crescent has aso divided its pool of 9,000 donors into SMS “mailing lists” according to blood type, and in the last few days sent SMS appeals to 5,000 blood donors.  As IRIN reports, there is an increasingly dire humanitarian situation in Gaza.

Meanwhile, there are lots of people on both sides of the conflict are on Twitter, making their respective cases more or less polemically. Twitter is, of course, also used by many news organizations. The Israeli consulate in New York, as part of ongoing Israeli public relation efforts, held a ‘citizen press conference’ on Twtter today, answering questions and making the Israeli case. David Saranga, Consul of Media and Public Affairs in New York, answered questions for more than an hour.  According to a release, the consulate “will do our best to answer through Twitter.  If an answer requires more than the 140 character limit, we will respond on Twitter with a link to an answer posted on our blog.” [via MOBILE ACTIVE]