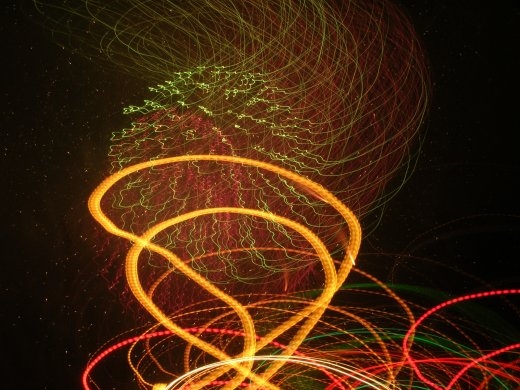 Best’s associates and admirers had always been curious about his rumored talent for landscape stills. As the requests accumulated, Best endeavored on the laborious enterprise of sifting through the some 4,000 photographs he shot while touring France in autumn of last year. One day while Best conversed withAlgeo at Woody’s, Algeo showed Best his collage of photographs to get a professional opinion; and, although Algeo has had no formal training in photography, Best was taken by the pieces, and thought them to be an excellent however contextually contrasting addition to his stills. Thus, Best conceived the idea of “Views”.

Flourish is a small and elegant establishment adorned in the polished flares of Best’s co-proprietor and life-partner, guru interior designer Louise Navaratte . Aside from cycling works of various artists, one piece, functioning as a chandelier in the gallery, remains perpetually on display, and has become part of the Flourish’s nouveau-vintage aesthetic. “Hung Like a Horse”, which can be easily spied street-side through Flourish’s front window, is a pastel-colored ceramic horse like you would see on a children’s merry-go-round endowed with a phallic light bulb dangling from its crotch; and, telling from it’s cheery smile, the horse seems very pleased with its “gift.”

Several of the gay community’s upper echelons attended the opening of “Views”. But after mingling with a number of the guests, Best was not the only one whose reputation preceded him, but Algeo’s too: droves of his bar regulars who caught wind of the opening arrived in a seemingly endless stream of well-wishers, filing Flourish’s petite quarters to the brim.

The mirthful buzz that perpetuated the evening indicated the approbation of the works displayed. Of Best’s photographs, two stood out from rest. The first was of a palatial garden scene of conifers and other dewy greenery flanked by 40-foot hedges rising afar on the outset of the expansive bed of a fountain. The second was of two regimented groves of trees suffused with autumnal browns phasing into burning reds, and a path between the groves leading to a ominous maelstrom on the horizon.

Although this was Algeo’s first artistic venture, many stopped to contemplate his enchanting renderings. A silent but immense energy radiated from each: something simple yet warm, evoking both unalloyed joy and a profound sense of repose. Accompanying these were other more dazzling pieces. The luminescent color of one photograph resembled not mere fireworks, but a supernova exploding afar in a dark, empty dimension. An impressive display to say the least! Go see “Views” at Flourish Gallery located at 323 Arch Street to the right of the giant bust of Ben Franklin made out of keys. “Views” remains on display until early February so go check it out while you can. Until next time…