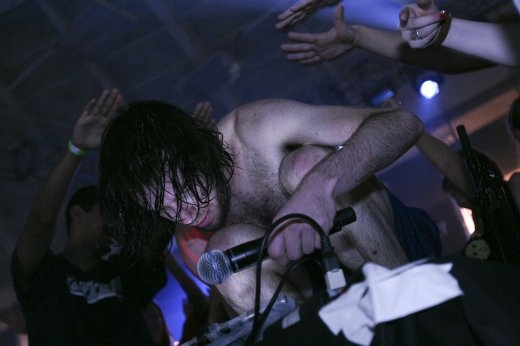 BY JONATHAN VALANIA FOR THE INQUIRER Somewhere in the nether zone where the rip-and-burn ethos of the Digital Age bumps up against the you-break-it-you-bought-it copyright laws of the Analogue Age is where Girl Talk opens his laptop and throws a party. That may sound about as sexy as an algebra equation on paper, but as parties go, it’s a deathless, breathless unstoppable good time: smoke, confetti, toilet paper streamers, and, like, all your favorite songs — together at last! Unlike most, DJs, Girl Talk, aka acclaimed Pittsburgh-based mixologist Gregg Gillis, doesn’t cut and paste from obscure vinyl b-sides and deep cuts from rare albums, he goes for the hits, and lots of them — it would take up an entire page of this newspaper to name all the songs that you and me and everyone else knows by heart that have been cut, chopped, tweaked and mashed-up on Girl Talk’s latest, Feed The Animals. Seriously, it is astonishing.

Thursday night, armed with nothing more than a laptop, Girl Talk converted the Starlight Ballroom into a throbbing hothouse of sweaty, nubile youth gyrating euphorically to a shape-shifting sonic mosaic of some of the greatest and goofiest hooks and lures of the last 30-plus years. Long-haired and bearded, with a white bandana tied around his forehead, Gillis conjured up Feed The Animals from beginning to end, juggling the various loops in real time, creating juxtapositions of the familiar that surprised, shocked and above all demanded a physical response from the listener. Resistance was futile, not that anybody tried. People came to dance, and roughly a third of the audience joined Gillis onstage, as is the ritual at Girl Talk shows.

As Gillis’ fame continues to grow — and judging by the sold out crowd and the deluxe tour bus parked outside there is no reason to expect he is going anywhere but up — he might want to reconsider the standing invitation to join him onstage. Several times the the writhing mob onstage completely swallowed Gillis and he repeatedly had to ask everyone to step back and give him some room. In fact, Girl Talk’s first number, “Play Your Part (Pt. 1)” — a giddy, shotgun wedding of Roy Orbison, Outkast, Spencer Davis Group, Cupid and Pete Townshend (and that’s just the first minute!)  — came to a screeching halt after just a few bars, engulfing the Starlight in an eerie silence. It seems Girl Talk was rendered mute by the oldest enemy of technology: somebody accidentally kicking the plug out of the socket.