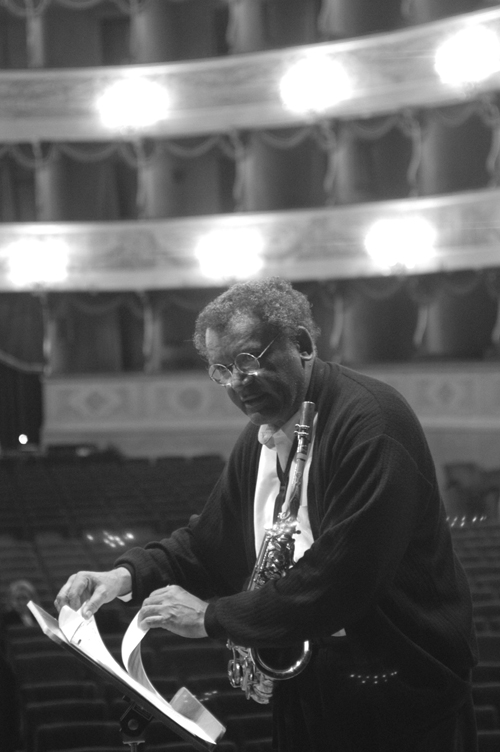 BY DAVE ALLEN Last night’s concert at Settlement Music School confirmed it: Anthony Braxton is from another planet. I’d known that he had written music intended to be performed at non-Earth locations and that one of his compositional heroes, the late Karlheinz Stockhausen, claimed to have emanated from the star Sirius. But during a compressed set with his Falling River Quartet, it was clear thatBraxton is operating on another plane of existence. Good for us, the curious listeners; not so good for his fellow players, whom he frequently left in the dust.

On three types of saxophones and the mammoth, unwieldy contrabass clarinet, Braxton explored every variety of timbre and attack. He shifted with ease from blisteringly fast scale patterns to squeaks and trills at the edge of audibility. Even while playing gestures that weren’t notes per se — clacking keys, rough growls — he was fully engaged in honing his sound into something powerful and lethal. The labor that went into making some of the sounds was apparent from deep gasps for breath, but Braxton switched between instruments casually, and took carefully-timed pauses to survey his colleagues’ work. For all the frenzied riffing, Braxton’s mastery is still deeply, imperturbably cool.

The three women on stage with Braxton – Erica Dicker on violin, Sally Norris on piano, and Katherine Young on bassoon and contrabassoon – all seemed at least a generation younger and a step or two behind him in terms of inventiveness. Dicker and Norris came the closest to approximating Braxton’s playfulness and sense of exploration. Dicker plucked and scratched with force and precision, and  took a highly percussive approach with her bow. Norris employed some of the inside-the-piano attacks and flurrying motives developed by Braxton’s composing predecessors. One section in which she damped the piano’s strings with her hands drew out some stunning timbres. Young’s playing was practically sedate, prone to see-sawing two-note figures and simple octave shifts. She was seated across from Braxton, who produced incredibly high notes on the usually deep-voiced contrabass clarinet, but she seemed to stick to her comfort zone in the instrument’s middle register.

For their initial hour-long session, all four players were reacting to Braxton’s graphic scores, which combine painted images with lines, numbers, and other insignia. Braxton turned over an hourglass before they started, but to no effect: The quartet played past when the sands ran out and didn’t flip it over for the encore. Anything goes, I suppose.

Braxton’s landmark first recordings were for solo alto saxophone; just him, nobody else. The evening’s best moments came when Braxton — looking at the score or not, with whatever instrument held to his mouth — tapped into some of that cavalier spirit and plumbed the depths for a song of himself. His young accompanists might reach that point someday themselves, but last night, it was Anthony’s world, and they were just playing in it.

Anthony Braxton appears tonight at 8 pm at St. Mark’s Church, conducting two of his works for brass ensembles. Tickets are $10, and attendees from last night’s show will be admitted for free.