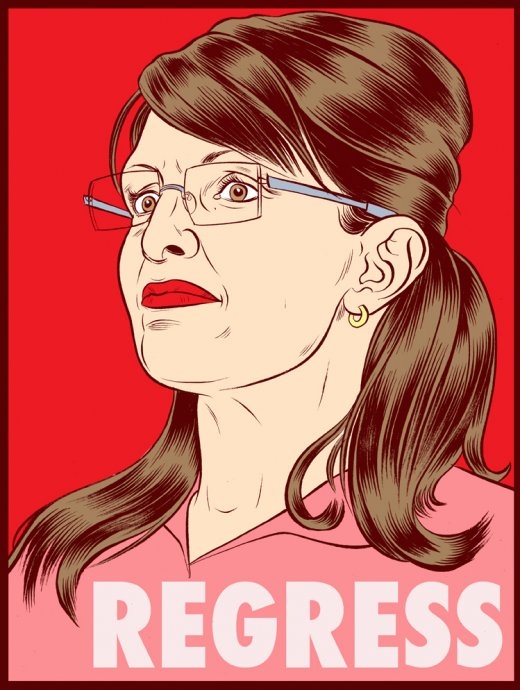 WASHINGTON POST: With the vice presidential candidates set to square off today in their only scheduled debate, public assessments of Sarah Palin’s readiness have plummeted, and she may now be a drag on the Republican ticket among key voter groups, according to a new Washington Post-ABC News poll. Tonight’s heavily anticipated debate comes just five weeks after the popular Alaska governor entered the national spotlight as Sen. John McCain’s surprise pick to be his running mate. Though she initially transformed the race with her energizing presence and a fiery convention speech, Palin is now a much less positive force: Six in 10 voters see her as lacking the experience to be an effective president, and a third are now less likely to vote for McCain because of her. A month ago, voters rated Palin as highly as they did McCain or his Democratic rival, Sen. Barack Obama, but after weeks of intensive coverage and several perceived missteps, the shine has diminished.  MORE

JOE LIEBERMAN: “She’s not lived in the world of Washington, so she doesn’t know every detail of all the questions senators deal with,” Lieberman told NBC’s Andrea Mitchell. “But, frankly, that’s her strength. I think that’s why a lot of regular people out across America think she’s going to be their voice.” Mitchell interjected, “Senator, she wants to be a heartbeat away from the presidency. You know, that doesn’t mean just being an average mom, it means bringing other skills.” But Lieberman stayed on the point, stating later, “I think tonight is not a kind of final college exam. I think the point is who is she as a person… Whether she can answer every detailed question, I don’t think that ultimately matters to the American people so long as they think she passes those other personal thresholds.” MORE

PHILADELPHIA INQUIRER:  But with expectations so low for her, Palin could successfully pull this off, just as she did in the 2006 debates among Alaska’s candidates for governor. That is, she turned on the charm and didn’t worry about the details of her positions. It’s actually a man who comes to mind when considering Palin’s past debate performances. Well, not a real man, a 1960s TV character – Andy Taylor, the affable sheriff of Mayberry, U.S.A., played by Andy Griffith. No matter the issue, Andy could fashion a homespun remedy, if given time to sit a while on the front porch or walk down to the store to get a bottle of pop. But Sheriff Taylor was smart, full of common sense. That’s the persona Palin used to good effect in Alaska and has tried to employ to this point. I may not know all the details, but I’ll get back to you, soon as I get a bottle of pop. MORE

PHAWKER: Long have we asked ourselves, upon finishing reading an Inquirer editorial: Who writes this crap? Does someone actually get paid to pass off these tepid re-statements of the obvious as an opinion? This is by far the WORST editorial we have read about the Veep debate in a major American newspaper. That is not editorial writing, that’s just being an echo chamber for the prevailing MSN conventional wisdom and the Fox News spin cycle.

You’ll get no complaints from me about Phawker being “all Obama all the time”.  Keep on pushing! Palin’s mean-spirited

speech at the RNC inspired me to get off my ass.  The next day I volunteered for the Obama campaign.  Yeah, I have to work at my real job during the week.  But every Saturday I’ve been walking the rough streets of Norristown registering new voters.  I’m not sure how much you know about Montco, but it’s sad to see a huge ghetto in the county seat of one of the richest counties in the state.  I’ve been impressed with all the good people I’ve met, and energized by their solid support for a man who gives them Hope. I’d like to see Springsteen play Saturday afternoon, but it’s the last day for voter registration.  So I’ll be back in Norristown for one last sweep.  (Sorry, I don’t mean to sound like a martyr. I’ve seen Bruce a zillion times anyway.)  I know the recent polls are encouraging, but I’m still very concerned about the racism factor in Pennsyltucky.  We need a huge turnout from the city folk. Thanks for all the great stuff you’ve been putting out there.

RELATED: I Has Supreem Kortt?

HOWIE KURTZ: After a lengthy, smiling pause, Sarah Palin could not name a Supreme Court decision she disagrees with, beyond Roe v. Wade, in an interview that aired tonight on CBS.The Alaska governor had just finished explaining that abortion should be decided by individual states when CBS anchor Katie Couric asked, “What other Supreme Court decisions do you disagree with?” “Well, let’s see,” Palin said, stalling for time. “There’s, of course — in the great history of America rulings, there have been rulings, that’s never going to be absolute consensus by every American. And there are those issues, again, like Roe v. Wade where I believe are best held on a state level and addressed there. So, you know, going through the history of America, there would be, there would be others but…” Asked again if she could think of any, Palin answered without naming a ruling or even subject area on which she would challenge the high court. MORE

EDITOR’S NOTE: Tune in tonight for the cattiest debate coverage on the Internet!