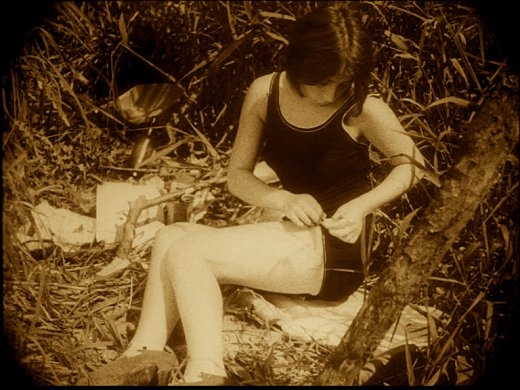 BY DAN BUSKIRK, FILM CRITIC The synopsis sounds like it could be a reality TV episode: two couples, “real people” like me and you, flirt and switch partners during a summer outing by the lake. What sets this apart from Cheaters is that it was shot in the Berlin of 1929 and the team that created would go on to make some of Hollywood’s crowning achievements. People On Sunday is a one-of-a-kind experiment made by a collective of young Berliners over a summer of Sundays in 1929. It’s a staggering list of talent, all a decade away from beginning their biggest triumphs as brainy German expatriates of Nazi-ism who left their indelible marks on Hollywood.

The script is partially credited to Billy Wilder, perhaps Hollywood’s greatest writer/director and the genius behind Some Like It Hot, Sunset Boulevard and Double Indemnity to name a few. Already he shows romance as being part passion/part craven deviousness. Curt Siodmak is co-writer, his 1941 script for The Wolfman cemented the werewolf myth in Hollywood. His brother Robert Siodmak is co-director, he’d later work on the beloved Val Lewton horror cycle as well as going on to direct film noirs like Criss-Cross and the 1946 adaptation of Hemingway’s The Killers. His co-director is Edgar G. Ulmer, the true artiste of Poverty Row and the director of the fatalistic cult classic Detour. Ulmer had earlier worked on Fritz Lang’s visionary sci-fi opus Metropolis with special effects wiz Eugen Schüfftan. Schüfftan contributes People On Sunday‘s frequently audacious cinematography (he’d end his career winning an Oscar for shooting those seedy pool rooms in The Hustler), joined by Fred Zinnemann, the director of High Noon.

Not only is this film busting its seams with talent, a fleeting look at the goofy face of the bushy haired Ulmer (seen fleetingly as a spank-happy frat boy) reminds you that you’re seeing this brain trust (except for the elder Schüfftan) in the exuberance of their mid-twenties. Their enthusiasm for the medium leads them to all sorts of clever choices (like having the bathers wade out to the camera positioned at mid-lake) while maintaining a naturalism nearly unseen in silent cinema. Its that docudrama element that sets the film apart from similar working class dramas of the era, particularly King Vidor’s 1928 classic The Crowd. There Vidor placed movie stars down with the rabble but here the film has cast beautifully normal-looking non-actors playing themselves: Erwin the cab driver, Brigitte the record store clerk, Wolf, the Lothario wine salesman andChristl , the movie extra who ironically becomes an extra on her own date when her friend Brigitte sneaks off into the woods to make love with her suitor. This all unfolds with a languor and understatement that cinema didn’t re-discover till the French New Wave decades later. Unavailable in the U.S. (Criterion has been hinting about a release in recent months), People On Sunday is one of those confounding discoveries that makes a mockery out of fussy film academics attempts to plot cinematic advancements in a precise and orderly fashion.Also on the bill is a more surreal day in the park, the 1986 television production of Stephen Sondheim’s Pulitzer Prize-winning musical meditation on the artist’s plight, Sunday In the Park With George, where you might best understand people’s appreciation for Mandy Patinkin and Bernadette Peters.