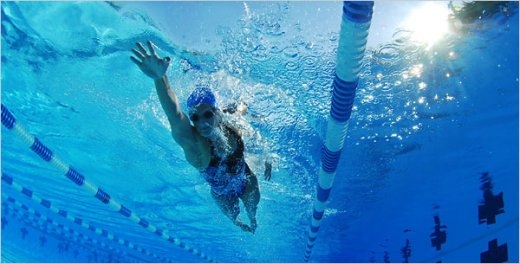 BY ST. JOHN BARNED-SMITH OLYMPIC CORRESPONDENT Well, hopefully this is not news to you – if it is, my columns have not sparked the appropriate level of US Olympic Swimming ardor that I’m looking for from all of you. Phelps won his fourth and fifth gold medals yesterday, in the 4×200 free relay and the 200 butterfly. The relay was the fun race to watch because the US team didn’t so much as beat their opponents as they did spank them silly. USA! USA! So Phelps took the lead over the four Olympians who were tied for the most golds – Mark Spitz (swimming), Carl Lewis (track and field), Paavo Nurmi(a Finn, track and field), and Larysa Latynina, a Russian gymnast. Tonight, Phelps swam in two events, but they were semifinals, so no new medals. I’m going to pause on all that, and start to point out a couple of his teammates, amazing swimmers in their own right, who have caught only the edges of the media wake trailing Phelps. First, Dara Torres. Torres is the oldest female Olympic medalist in history, having competed in five different Olympic Games. She’s 41, and competed in her first games when she was 17. (She took off two of them to have kids.) She’s accrued a total of 10 medals, and is swimming faster than she did as a teenager. Crazy.

She’s fended off allegations and suspicions by offering to take incredibly detailed drug tests, but another reason for her success is her support staff. She spends a hundred grand a year on them, getting massaged, stretched, and receiving other personal training. Torres also is one of the team captains, and a member of the relay team – which she’s medaled in five times in five Olympics. Fricking ridic, this Old Woman of the Sea. Tomorrow, you get to read about Phelps’ “good friend,” Brian Lochte, and one of the only other swimmers who might be able to catch him, Ian Crocker. SLANTED & DISENCHANTED: I also wanted to mention the brouhaha over Spain’s boneheaded basketball team. For those of you who don’t know the full story, the Spanish Olympic B-Ball team shot an advertisement for a Spanish courier service. At some point during the photo shoot, the photogs allegedly asked the team to pull their eyelids back and up, like you might have when you were dicking around as a child. The team – every member, including the Laker’s Pau Gasol(!) – did. Have I mentioned the dragon illustration painted on the court’s surface? Now, in our little American melting pot here in the US, this kind of behavior would never fly. The Spanish, however, are claiming they meant no foul. Which I suppose is, true, but you’ve gotta be wondering – what the hell are they on? Of course, this is also the country that has called their opponents monkeys, and the country trying to host the 2016 Olympic games, in Madrid. Time to grow up and put away childish things, this is the Big Time. Ditch the ‘Me Chinese, me go pee pee in your Coke’ jokes, OK guys? Thanks. UPDATE… GAWKER: You would have thought, perhaps, that the embarrassing ad photo of the Spanish Olympic basketball team in the eyelids-pulled-back, “Slanty-eyed Chinese” pose was just a one-off thing. I mean, if they had done this before, they would have had a better apology ready, right? But maybe Asia-mocking is actually a favorite pastime of all Spanish athletes—because their 2008 Federation Cup Tennis team, which beat China to move into the finals, was photographed in the same god damn pose! MORE

ABOUT THE AUTHOR: St. John Barned-Smith first discovered the water when his mom made him take swim lessons as a toddler. He swam on competitive swim teams – sporadically – from 4th grade through his senior year in high school, before walking on the Case Western Reserve Swim team, where he got his ass handed to him on a daily basis. (Seriously, he was the slowest kid there.) Nevertheless, a swimmer for life, he’s been glued to the swimming events of the Olympic games ever since the Thorpedo (Ian Thorpe) became a phenom during the 2000 Olympic Games in Sydney. He’s sending these dispatches as a way to destress while writing in the Chicago-based Academy for Alternative Journalism, a paid journalism fellowship which hopes to disprove King Ed about the relevance of the printed word.