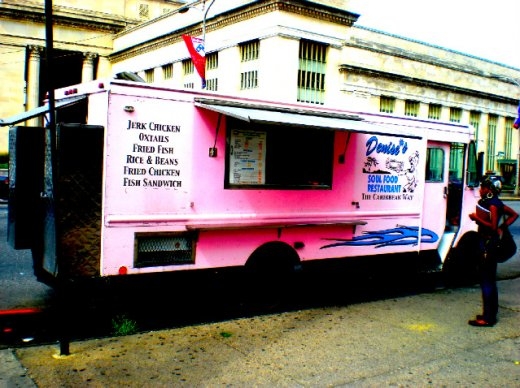 BY AARON STELLA Welcome my fellow hungry Americans to another edition of Truck Stop, where each week we’ll visit street vendors in different parts of Philadelphia to assist the common wayfarer in their travels and grub scavenging. Hey, don’t give me that look — if you ain’t too proud to get your news off the Internet, then you probably ain’t too proud to eat sushi off a truck. This week: the University City area, so whether you’re ambling around Drexel or Upenn, or just on your daily commute through 30th street station, this one’s for you.

In case your unfamiliar with popular soul food fare, common dishes include, but are not limited to, jerk chicken, oxtails (yum), fried fish, rice and beans, fried chicken, and a smorgasbord of sandwiches bulked with flavored meats and musky spices. Mary Ren, and her coworker, Jackie Marvem, are Haitian. Ren came to the US about 10 years ago with her husband and two children and Marvem came two years ago.

The Menu
Lunch items (refer to list above) are $7.00 (oxtail is $9.00) and include two sides
Individual sides $2.50
Sandwiches $4.50-5.00
Iced-tea $1.50; Water $1.00
I ordered the oxtail with the mac n’ cheese and candied yams. I did a double take when Ren handed me the Styrofoam container—soggy and dropping from the weight of its contents. Inside was fatty oxtail meat spindled on the bone and oozing with succulent juices; then rotund dowels of savory mac n’ cheese and creamy yams. Both the mac and yams came in heaps. Service is swift: it wasn’t more than a minute or two before I came to from a brief daydream, only to find Ren smiling expectantly with my meal in hand. She was reluctant to converse and, aside from small want of publicity, preferred to remain as anonymous as possible. No problem. Jackie shared in Mary’s reluctance to chat, up until I inquired whether he was married or not, which after an excited “no,” prompted him to ask that I’d stay on the look out for a “pretty white woman” for him.

Gigi (who asked to be called only Gigi), is married with two kids. She’s worked on the truck for about two years, but Big R, who refused to disclose any personal information, has been running the truck since 2004. Gigi said they compete with Denise’s for business but that they coexist peacefully. Over the lunch rush, customer distribution between the two trucks was in fact even.

The Menu
Identical to Denise’s except for peach cobbler and cornbread. I’ll give it to you straight: far inferior to Denise’s. I got the fish platter on Gigi’s recommendation with collard greens and mac n’ cheese (yes, I’m a sucker for the mac with the cheese). I could only finish about a third of the Talapia, the fish of the day. Once again, everything was in ample portions; however, it wasn’t the serving size that staggered my appetite, it was the petrified batter of the fish, so I really don’t know why it’s so popular. The mac n’ cheese had been mashed into mush; the collard greens somewhat redeemed the whole, maintaining body without being over cooked. Avoid the Iced-tea. Two-thirds sugar one-third tea is all I have to say about this electrolyte harbinger of death. Service was altogether sluggish. It was like some soon-to-be-cancelled Food Network special on qualuudes starring the always insufferable Rachel Ray. As orders began to pile up, Big R rustled awake from a midday nap and hustled to work to the same tired pace as Gigi. Aside from her want of anonymity, Gigi was pleasant and open to converse. But I’d be careful not to pester her. One rather rowdy patron kept barking orders a little to long and in no time a screaming match had erupted between her and Gigi: Gigi had no problem dropping everything she was doing to step out of the truck and have it out with miss thang. Just a little reminder to be courteous for Christ’s sake.

“Egyptian-style” falafels, to be exact, made with only the freshest ingredients—minus the oil but with extra hot sauce. After a long employment under his brother’s renowned falafel truck, dubbed “Best Falafel Stop at Upenn”, Memo Houssein — going on 12 years residing in the US — opened his own stand on Drexel’s campus after recently relocating from Upenn. Egyptian himself, Memo believes his style of falafel to be superior to the traditional Middle-eastern make. Proper execution of the falafel requires that ingredients are prepared fresh everyday and always in small batches so nothing goes to waste. Memo says he enjoys the Drexel community—that “nice people” always visit and bring business.

The Menu
Eggs, sausage and cheese steaks, $0.50 lower on all items than most trucks
A $1.00 difference between large and small sizes
Falafel $3.50, baba ghanous $0.50
Well for starters, it was a hefty wrap; I got mine with babaganus and plenty of hot sauce at Memo’s recommendation. There wasn’t a single culinary hiccup — every element tender and harmonious. The fresh slices of cucumber, tomato, iceberg lettuce, tahini, and just the right amount of baba ghanous won my affection. So my verdict on falafels is go Egyptian whenever possible. Memo is not only a speedy tradesman, but also a genteel conversationalist—just a really nice guy altogether. His truck is specially formatted so he can access all necessary ingredients and chop veggies mid-shift when needed. Even after a line had formed, it dwindled rapidly on account of his swiftness and precision.