THE INDEPENDENT: John Currin is a shooting star of American figurative painting whose trajectory to fame and riches peaked gloriously five years ago with a retrospective at three major world museums. But he has some explaining to do. The 46-year-old has since controversially switched galleries, performed a curious vanishing trick and now… well, his latest flesh-on-canvas efforts would make Hugh Hefner blush. Indeed, he now acknowledges that several factors contributed to what was indeed a long dry period after the retrospective – a time when, he says, he was also depressed and experiencing a disconcerting “impotence with the brush.” Currin [pictured right, with his son] remained shaken, for instance, by 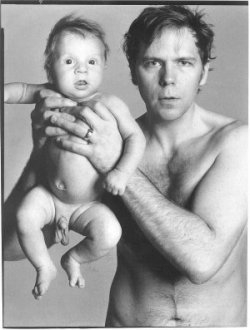 the experiences of the 9/11 attacks on the Twin Towers, which had almost cast their shadows on the block where he lived. “I don’t think anybody would be able to deduce it from my pictures – the way my life changed and my mood changed and my surroundings changed after that. It was a dividing line in my life.

What drew him to these waters is a question Currin has several answers for. The most obvious, perhaps, is that it was a theme that gave him new reasons to explore ways of paying homage to the nudes of the Old Masters. “I love grand, classically nude paintings and there is really no situation where plausibly you have criss-crossing limbs and stuff like that except in pornography.” Also fascinating to him, however, was the possibility of bringing his oil-paint grandeur to scenes of cheap copulation.“I thought it would be interesting to make them explicit and see if there is any mystery or any space left after you completely drain the potential. It’s like when you don’t show things, you build up a kind of voltage. So what happens if you totally open it up? Is the painting going to have any kind of energy at all? In a way, these are very unsexual paintings.”

It might seem “silly” or “bombastic” (Currin’s words) to try thereafter to cast these new works in the context of Islamic fundamentalism and more specifically the furious reaction in parts of the Muslim world to the publication by a Danish newspaper in 2005 of a cartoon depicting the Prophet Mohamed. Few things motivate, meanwhile, more than anger and that is what was stirred in Currin by the cartoon furore. He was infuriated first by the tirades of some Islamic clerics against the cartoon and was then doubly dismayed by what he considered the cowardly response of the West and its media. “I found it incredibly dispiriting that The New York Times and Time magazine wouldn’t publish the cartoon. After people had been killed over these things, they wouldn’t show people what it was about. You could not find it anywhere.” He goes on: “I am caught up in a lot in fear for Europe and fear for the West, that we will lose the war against Islam. And it is a war against Islam, I think.” MORE

ARTSY: He Had The Devil On Both Shoulders

ART KNOWLEDGE NEWS: This year more than 32,000 people voted in the People’s Choice for the Archibald Prize and their favourite portrait by far was Vincent Fantauzzo for his portrait of Heath Ledger called ” Heath.” To date 130,000 people have visited the 2008 Archibald Prize, which is a record attendance for the gallery since Archibald began in 1921. Vincent Fantauzzo painted his portrait of Australian actor Heath Ledger in December just weeks before Ledger died in New York in January. Fantauzzo and Ledger were friends for around five years. “We had been planning to do a portrait for the last three years,” says the artist, “but the time was never right. Then late last year he gave me a call and said he was ready to do it and was really excited.” They met at Ledger’s mother’s home in Perth and had a long discussion about ideas for the painting. “I wanted it to be dealing with self, your own consciousness and your thoughts,” says Fantauzzo. “An artist is their own biggest critic. I had seen his eyes wander off or stare into the camera while doing interviews and wondered what he may have been thinking. I felt that being a celebrity, you are always under constant scrutiny with so many demands made of you that you have to hold part of yourself back and not give too much.” MORE