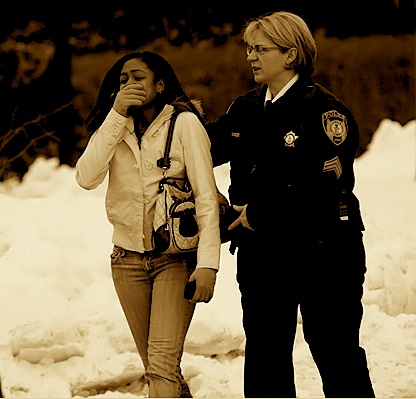 DeKALB, Ill. — With minutes left in a class in ocean sciences at Northern Illinois University on Thursday afternoon, a tall skinny man dressed all in black stepped out from behind a curtain on the stage of the lecture hall, said nothing, and opened fire with a shotgun, the authorities and witnesses said.

The man shot again and again, witnesses said, perhaps 20 times or more. Students in the large lecture hall, stunned and screaming, dropped to the floor. They crouched behind anything they could find, even an overhead projector. They scattered, the blood of victims spattering, some said, on those who escaped

Five people, all of them students, were killed, John G. Peters, the president of Northern Illinois University, said at a news conference late Thursday evening. Sixteen others were wounded, two of them critically, Mr. Peters said. Hospital officials said several of the students had been shot in the head. The gunman, whom the authorities did not identify, also died of a self-inflicted gunshot wound, Mr. Peters said. [via NEW YORK TIMES]