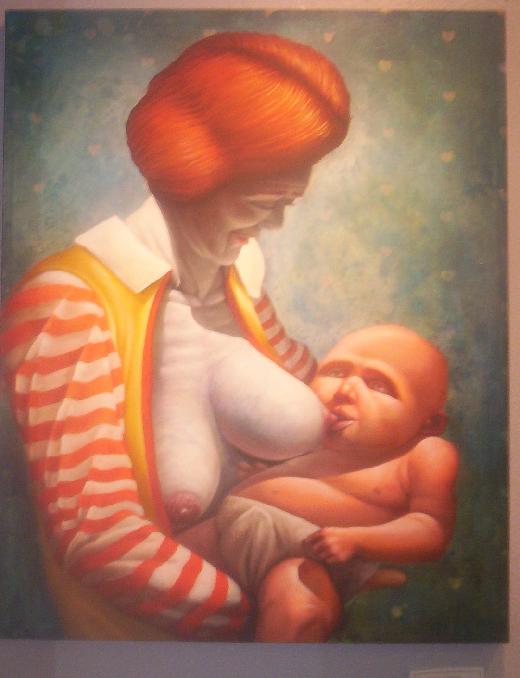 BY JEFF DEENEY Today I saw a confused young man having a meltdown behind the counter of the McDonald’s on 52nd and Chestnut Street. His uniform was oversized and he had a dark, long-sleeved shirt on under his uniform that looked unwashed. His grease-stained visor’s brim was pulled down low to obscure his eyes. He rang my order up wrong, so I repeated it slowly, thinking maybe he misheard me. It was crowded and loud, and I figured my order was drowned out by the noise. I tilted my head a bit to see if he was listening, but he dipped his chin when I did, trying not to make eye contact with me.

“I rang up a number three meal with a coffee. So you don’t want that now?”

I repeated myself, again, this time even more slowly.

“Number three meal, with a Coke. Then, also, aside from that, a coffee.”

Each time I repeated the order, he looked more confused. He seemed to be punching buttons at random, hoping the right information would magically appear on the register’s screen. From where I was standing, I couldn’t tell which buttons he was pushing, or what the register’s screen read. Minutes passed while he pushed the buttons harder,

using his thumb to grind down on the register’s touch pad. In frustration, he stepped back from the register, looking around at the other counter staff, hoping for a bail out. The lines were growing longer, and those waiting behind me grew agitated. The other counter staff rushed around furiously, bagging up burgers and boxes of fries for the drive-through. After coming up empty on his meek search for an assist, he turned back to me and for the first time since I stepped to the register he raised his head enough for his eyes to peek out from under the brim.

“It’s broke,” he said, pointing at the register. I could tell he was hoping I would just go away. I was also pretty sure the register wasn’t broken, he just didn’t know how to operate it. It wasn’t that I was losing patience, the meal was for a client and I was on the clock, but the other lines now reached the other side of the building and I didn’t want to be there all day.

“Can you try again,” I asked, trying to not sound angry. His face fell as the hope of my disappearing dissipated.

While the kid went back to struggling with the machine, I tried to make eye contact with the girl working the next register. She wore a dark velvet blazer over her McDonalds uniform and was working fast, processing orders one after the next, calling them over her shoulder to the kitchen staff. She saw me looking at her and paused for a second to return my eye contact. I seized the moment to ask, “Can you take my order real quick?” I pointed at the helpless kid in front of me who was still fumbling with the register.

The girl got attitude, shooting back angrily, “I can take your order after you get to the back of my line and wait.”

I sighed and went back to waiting on my order.

The McDonalds at 52nd and Chestnut at midday is a neighborhood gathering spot, where old heads sporting Kufis and Fez gather around the tables to nurse cups of coffee while shooting the shit. One of them got nosey and drifted over to see what the holdup was. I saw that he had a crudely drawn, faded jailhouse tattoo of a crescent moon and star in the crook of his hand, near the base of his thumb. He watched the still-fumbling kid at the register with unabashed amusement.

I turned to the old head and said, “I’ve been here for five minutes already. I should probably be pissed off but I’m not, I actually feel bad for him. Either he’s new and doesn’t know how to work the equipment yet or he’s been poorly trained and didn’t learn properly. I think he needs help.”

The old head twisted his face up like what I just told him was the biggest line of bullshit he ever heard.

“Man, the only thing that nigga right there needs to do is stop gettin’ high before comin’ to work.”

His theory made sense. I didn’t disagree.

The old head persisted, heckling to the kid who by now had totally given up and was staring at the floor.

“This ain’t no way to go through life, youngin’!”

And so on. Now the mob was incited, and those who had waited in the long line stretching behind me with increasing impatience launched insults at the kid from clear across the room.

The kid’s bailout finally came when a heavy-set black woman in a beige pantsuit and an unzipped parka showed up behind the counter, fresh from the cold. Maybe she was a manager arriving for her shift, maybe she was the franchise owner. She took one look at the kid who had gone back to grinding uselessly on the register’s keyboard with his thumb and made a beeline to his machine, shoving him out of the way, taking my order and apologizing for the wait. She dragged the kid by one sleeve to the rear of the kitchen by the manager’s office and handed him a broom, pointing to a general area and telling him to sweep.