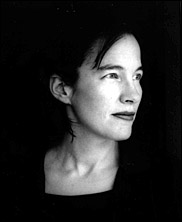 Author Alice Sebold has produced difficult books before: Her novel The Lovely Bones, soon to be filmed by director Peter Jackson, centers on a 14-year-old looking down from heaven after her own rape and murder. Sebold’s 1999 memoir Lucky began with an account of the author’s own rape, which occurred when she was a freshman at Syracuse University. The title comes from a comment made by a policeman, who told her she was lucky not to have been killed and dismembered like another woman attacked in the same vicinity; the unflinchingly candid book detailed Sebold’s battles with the aftermath of the trauma, including an addiction to heroin. Now comes Sebold’s latest fiction, The Almost Moon: A Novel Its narrative involves a middle-aged woman who murders her ailing elderly mother. She tells Terry Gross that while she reads fiction to escape the “hideous realities” of ordinary life, she explores those same realities in her own fiction partly to better understand them. “I don’t think ignorance is a way that you gain distance on something,” Sebold says. “I think understanding is the way to gain perspective — and therefore can live among those hideous realities. You can live with them.”

Is the Bush administration serious about a possible war with Iran? Our guest REESE ERLICH is author of The Iran Agenda: The Real Story of the U.S. Policy and the Middle East Crisis. He argues that the U.S. is playing a dangerous game that could turn into a real war. Erlich is co-author of the 2003 book Target Iraq: What the News Media

Didn’t Tell You. Erlich is a freelance correspondent, and writes regularly for the Dallas Morning News, NPR, And the CBC in Canada.

Musician turned novelist. We talk with EUGENE DRUCKER a violinist for the Emerson String Quartet who has written the new novel The Savior. It takes place in a WWII concentration camp where a German violinist is sent to be the musician for a “rubber making plant” but he soon learns that it is actually a Nazi concentration camp. Drucker is in Philadelphia, to perform with the Emerson String Quartet tonight at the Kimmel Center in Philadelphia.

Traveling musical spirit Joe Ely stops by the World Café for music and conversation with host David Dye. Ely has two new albums, Happy Songs from Rattlesnake Gulch and the acoustic rarities disc, Silver City, as well as a book entitled Bonfire of Roadmaps. In his life on the road Ely has experienced it all, from hopping on boxcars to flying in private jets alongside artists like The Clash, Bruce Springsteen, and Bob Dylan. Looking back on these journeys helped inspire Ely’s book and both of his new records.
THE FLATLANDERS: Dallas