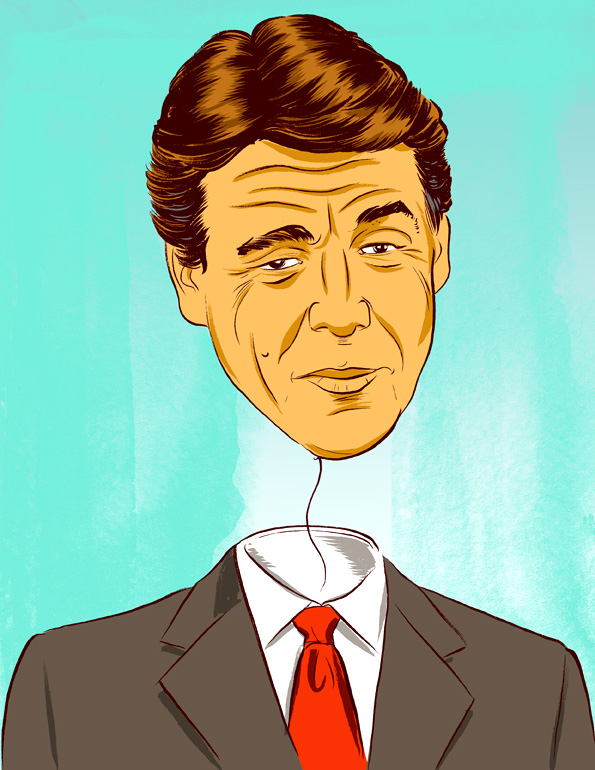 UPDATE OF THE UPDATE: A determined Rick Perry announced Wednesday he will not abandon his presidential campaign despite a fifth-place finish in the Iowa caucuses. “And the next leg of the marathon is the Palmetto State. … Here we come South Carolina!!!” the Texas governor wrote on his Twitter account. His campaign also confirmed his continued quest for the nomination. Perry, an avid runner, attached a photo of himself jogging near a lake, wearing a Texas A&M running shorts and showing a thumbs-up. The photo of Perry after what appears to have been a cold morning jog was decidedly defiant compared to the emotional speech he gave in Iowa. In his remarks, Perry told supporters that he appreciated their work but needed to consider whether there was a viable strategy for him to restart his campaign in South Carolina. Most supporters in Texas interpreted the announcement as a first step toward suspending his campaign. But after Newt Gingrich’s drop in the polls and Michele Bachmann’s exit from the race, Perry’s supporters say he still has a chance of winning over social conservatives who oppose Romney, with the poorly financed Santorum his chief rival. MORE

UPDATE: On the morning before Iowa’s first-in-the-nation caucuses, Representative Michele Bachmann of Minnesota said she was counting on a “miracle” to resurrect her faltering campaign. On the morning after, she acknowledged that it was beyond saving. Mrs. Bachmann said on Wednesday morning that she would not continue her campaign for the Republican presidential nomination. “Last night, the people of Iowa spoke with a very clear voice, and so I have decided to stand aside,” Mrs. Bachmann said at a news conference in West Des Moines. In her comments, she continued her criticism of President Obama and his policies, particularly his health care program and the Dodd-Frank bill that provided more oversight of the financial industry. “I will continue to fight to defeat the president’s agenda of socialism,” she said. MORE

LOS ANGELES TIMES: After a disappointing finish in Tuesday’s Iowa caucuses, Rick Perry is suspending his bid for the Republican presidential nomination. Speaking to supporters in Iowa, the Texas governor said he would return home tonight rather than head to South Carolina, as he had planned. “With the voters’ decision tonight in Iowa, I’ve decided to return to Texas, assess the results of tonight’s caucus, [and] determine whether there is a path forward for myself in this race,” he said. Though he stopped short of a final declaration, it was clear in his tone that Perry was eyeing an end to his campaign. Earlier in his remarks, he choked up as he read a letter from a volunteer, and called running for the presidency “the most incredible experience” of his life. MORE PHAWKER: Looking back, his biggest mistake was ever opening his mouth. Oh well, we’ll always have N*ggerhead!

RELATED: Mitt Romney edged Rick Santorum by a mere eight votes in Tuesday’s Iowa caucuses — a margin that amounted to a tie in the crucial opening act of the 2012 presidential race and propelled the newly reshaped contest to New Hampshire and beyond. After a three-way dead heat for much of the night, Romney and Santorum moved slightly ahead of Texas Rep. Ron Paul, who finished in third place. MORE

RELATED: Our own Rick Santorum’s a hit in the initial test of 2012. What can it mean? It means some lily-white Iowa evangelical farmers think the problems of the country can be solved by outlawing abortion and gay marriage and bombing Islamic nations. It means the heretofore-ignored Santorum gets a turn in the Mixmaster of presidential-campaign coverage. It means his campaign momentarily rises before sinking like the lead balloons of former “front-running” campaigns of Bachmann, Perry and Cain. And for three reasons: He’s got no money, he’s got no general appeal and, nationally, nobody knows much about him. Yes, he finished in the top tier of Tuesday night’s Iowa caucuses (he was narrowly leading at press time). But this is the most overcovered non-event in modern American politics and predictive of nothing. Past top-tier finishers were Mike Huckabee, Steve Forbes, Alan Keyes, Pat Buchanan and Pat Robertson. MORE

RELATED: After an embarrassing fourth-place finish — a dramatic fall for a candidate who enjoyed front-runner status just two weeks ago — Gingrich gave an angry speech and his demoralized campaign jetted out of Des Moines on a charter flight before the clock even struck midnight in Iowa. His plane headed to New Hampshire, but his campaign is headed for uncertainty. After collapsing in Iowa under the weight of a barrage of negative Mitt Romney ads — not to mention his campaign’s slow, disorganized response to the attacks — Gingrich will land in the Granite State running fourth in polls there as well, just six days before the Jan. 10 primary. MORE

RELATED: And Paul wasn’t finished with the strangeness. In a first in modern American politics, he welcomed to the stage an active-duty soldier wearing his camouflage uniform and critical of American foreign policy.Corporal Jesse Thorsen, of West Des Moines, is only 28 years old so perhaps he could be excused for forgetting the Defense Department regulation hammered into all members of the Armed Forces that they may not “participate in partisan political… rallies” and “cannot appear at any kind of political forum in uniform.” But Paul, himself a veteran, should have known better than to put Thorsen in a position where he could be disciplined by the Army. A lighter – but also odd – touch was in Rep. Michele Bachmann’s valedictory after her sixth place finish. She praised her husband, Marcus, but drew a wince from him when she disclosed that on the day before the caucuses “he was out buying doggie sunglasses for our dog Boomer.” The most heartfelt and probably effective speech of the night came from former Sen. Rick Santorum, who finished within eight votes of a stunning upset win. When he wasn’t comparing President Obama by implication to Benito Mussolini, Santorum spoke movingly about his immigrant grandfather and his “enormous” working-man hands. The appeal to blue collar Americans was clear. And, delivered without notes, it persuaded  the campaign of Mitt Romney at the last minute to take away the Teleprompter he was going to use. The result was a less-than-effective repetition of Romney’s standard stump speech. MORE

RELATED: Michele Bachmann told a small group of supporters Tuesday night that she’s staying in the presidential race as the only true conservative who can defeat the sitting president, despite a bleak showing in the Iowa caucuses. The Minnesota congresswoman was running in last place among six candidates as returns came in from the nation’s first Republican presidential nominating contest. MORE