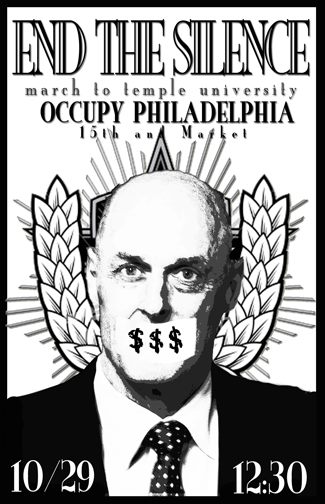 Occupy Philadelphia will be staging an “End the Silence” march on Saturday, October 29th, to protest corporate control of American politics. The march will spotlight the suppression of the 99% in politics, as well as politicians’ silence on issues that are important to the people. The silent march will depart City Hall at 12:30pm and proceed to Temple University, where former President Bill Clinton will be speaking at a political rally. From Cantor to Clinton, Occupy Philadelphia objects to the domination of American politics by corporate interests. The current system places the power of campaign contributions over the power of people, this leaves people of color, women, LGBTAQ individuals, workers, indigenous people, people with disabilities, and countless others in the 99% who are disenfranchised.

Where: From Philadelphia City Hall, Dilworth Plaza to Temple University

Why: Occupy Philadelphia will march in silence on Saturday to protest this system that mutes the vast majority and ignores important political, economic, and social issues while acceding to corporate interests. The Occupy Philly movement, which followed Occupy Wall Street and dozens of similar occupations around the country, continues to gain momentum. RSVP HERE