BY ZIVIT SHLANK JAZZ CORRESPONDENT Vocalist Jeannie Brooks may be the best kept musical secret in Philadelphia. She’s been quietly on the scene singing for almost 30 years. However what pours forth from her voice is anything but; Jeannie’s exultant style exudes a fiery purity that is inspiring.  It certainly doesn’t hurt that she also possesses a charming personality and a story full of surprises. A true lover of music, she has no particular allegiances. From jazz to soul to rock and roll, she is truly a complete musician.  See for yourself when she and her Quartet perform tonight at Moonstone Arts Center as part of the monthly Lucky Old Souls concert series.  You can also catch her as host of the jam session every Tuesday Night at the Flying Carpet Café. PHAWKER recently sat down with Jeannie for some coffee (we Phawkers love our caffeine) and conversation.

PHAWKER: No matter what it is that you create, there’s always that first “something” that sparks the fire. What or who did that for you?

JEANNIE BROOKS: My mother and father. My father had a beautiful voice, kinda like Al Hibbler.  I come from a family of singers. It was my father who taught me the concepts of listening and harmony. We all lived in the country, on a farm in Hopewell, NJ in our own special world. When I was 2 or 3, my siblings and I (I’m the youngest of 10) we would take walks in the woods and my father would teach us about nature. He’d say things like “look at the birds, listen to the birds. Nature never clashes with itself. Listen to what’s going on.” We were all singing a song, working on 2 and 3 part harmonies. I remember riding on his shoulders and just getting it. I got it.

PHAWKER: How did you make the transition from country girl to singing in the big city?

JEANNIE BROOKS: When I was 16, my sister and I worked at a record shop inside this big department store. I remember singing something and this guy walked by and said “Hey, my name is Jimmy and I have a friend who’s looking for a back-up singer.” We heard her stuff, and I thought, “boy, is she weird”, but my sister said let’s give it a try.  Turns out we were auditioning for Julie Davidson, who’s brother Jay is a saxophonist who’s toured with Whitney Houston, Steve Winwood among others, also has his own recording studio. Anyway, we sang for her and she really liked us. So we came down to Philly, and I just fell in love with the culture, the art and the vibe. My family warned me and said “they are going to eat you alive.” I said “hey, you gotta die somewhere. Might as well die working on my dream.” So I moved to the area in 1982. I was going to school for computers to try and get a job to sustain myself, but I was also doing lots of backup singing including some stuff with Jon Bon Jovi.

PHAWKER: Wait, You sang backup for Bon Jovi?! How did that happen?

JEANNIE BROOKS: I was working at Studio 4 with Phil and Joe Nicolo, and the engineer OBie O’Brien asked me “Can you come down and do backup for this guy named Jon Bon Jovi?” Now this was the early 80s, so, he wasn’t big yet. So I asked my son “Hey, who’s this Jon Bon Jovi?” and he started yelling and got so excited! We did 3 albums together, and most recently I sang on his gospel version of “Keep the Faith” which won a Grammy. So, I’m kind of a Grammy winner. We’re currently working on something, but I can’t say anything more just yet.

PHAWKER: What other notable folks have you sung with?

Jeannie: Gutarist Nils Lofgren, who’s played with Neil Young and Crazy Horse, has been in Bruce Springsteen’s E Street Band for over 25 years. Many people associated with the Cape May Jazz Festival like singer/lyricist Oscar Brown, Jr, saxophonist James Moody, I opened up for pianist McCoy Tyner. My sister Carol and I got to sing backup with Bruce Springsteen down at The Stone Balloon, which was so amazing! I met his drummer, who was playing in the band that my sister and I were singing with at a CD release party and he introduced us. Bruce is a quiet person, doesn’t like people to fuss over him, so we made sure to keep cool. Next thing you know, Bruce got up on stage and started playing. I looked at Carol and said “you know, we’re in the band, so we are allowed to go sing backup.” I grabbed her, got on stage and did this two-part harmony. Bruce walked over, started singing with me on my mic. I remembered thinking to myself “he’s so close to me this is so cool!” While that was happening, a photographer came up to us and went “click”. I never found out who did it, but I heard the picture is in the Bruce Springsteen exhibit at the Rock and Roll Hall of Fame in Asbury Park. It’s a great picture of us looking right at each other. 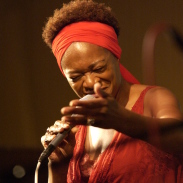 PHAWKER: Have you always been content with singing backup or has it been the goal to eventually have your own group and record?

JEANNIE BROOKS: Believe it or not, I’m actually pretty shy. When I first started singing with my sister Carol, people always told us that we sounded incredible and that we should get a band together. To me, that was the scariest thing because I didn’t want to have to be the one to tell everyone what to do. I thought that I would hurt someone’s feelings. Eventually I got over that fear but then it came down to the fact that I didn’t have the money, just my faith. So back in 2006, I went around to all my friends and asked them if they’d like to see a recording of my CD and they all said yes. The next thing I asked them was “How much would pay?” The average response was $50. So I got my engineer friend Andy Kravitz for 2 days. We had it set up like a jazz club, wined and dined the audience and recorded my first album. Back then I belonged to the Philadelphia Inline Skate Club, and for two weeks we traveled to Europe and skated in different cities like Paris and Barcelona. I researched all the jazz clubs and decided that’d be a great way to market myself. After I got done skating, I’d sit in at the jam sessions and sell my cds. Made some really nice contacts. I think it’s time to do another one and I’ve got a few ideas in the works like a Stevie Wonder tribute. Eventually the goal is to take the band that I sing with at my weekly Tuesday night jam session at the Flying Carpet Cafe and go to Europe.

PHAWKER: So for this upcoming performance at Moonstone Art Center, for the person who has yet to experience you, what can they potentially expect?

JEANNIE BROOKS: There’s gonna be a mix of standards but I’m also going to do “The Girls Got Ghosts” by Julie Davidson, which will be a nice tribute to her. I’m definitely gonna do a Stevie Wonder tune. I can say based on past performances, you’ll definitely have fun. There will be humor cause I like jokes. I don’t really like to talk a lot when I’m on stage. There will be intensity; there may be tears. You’ll get it all; pain, joy. I like to go for the jugular, but in a good way.