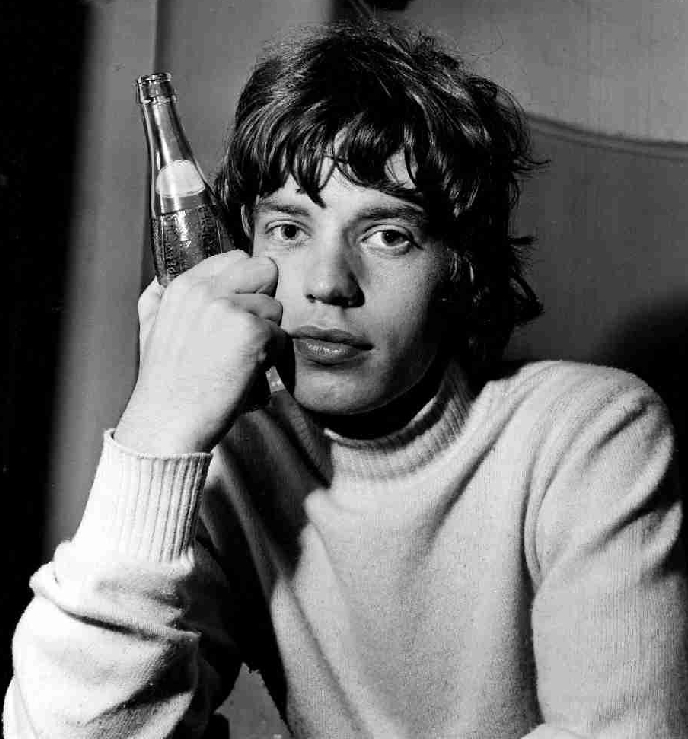 [Photo by IAN WRIGHT]
BY MARC SPITZ The T.A.M.I. Show was all about showcasing the new. James Brown arrived at the Civic Center and was promptly informed of what the Stones already knew. “I remember James coming up and saying ‘Of course I’m the last act on the bill, right?’ ” says Steve Binder, director of the T. A. M. I. Show. “I told him, ‘No, actually you’re going to be followed by the Rolling Stones.’ James looked at me and smiled and said, ‘Nobody follows James Brown.’ ”

“After James there was just enough time for the technical crew to get a smoke or a breather and to reconfigure the stage with the microphone setup or if they had their own drummer like the Stones did, bring their instruments on, twenty minutes,” Binder says. Twenty minutes . . . to follow that. Jagger lit a final cigarette and warmed his voice with a little Jack Daniels as the crew prepped the stage for the Stones. The sound of the fans clamoring for the band only made him worry about the challenge ahead: How does one justify following what just happened out there?

Jan and Dean returned to the stage to welcome “those fine fellows from England, the Rolling Stones.” Looking nervous but resigned, the brave young men

from South London assumed their headlining position. And they pulled it off. The Rolling Stones did the impossible and made the viewer forget Brown’s epochal spot. They were something so different, ironically derived from the same beat, but after a half dozen TV appearances they were adept at presenting a new breed of energy — and of making a viewer believe that they were watching some sexed-up space invasion. That’s how they matched James Brown. Surprise and sex. The Stones were like nothing anybody had ever seen before: male and female, familiar and strange, coming right at the viewer, leaving them no time to think, only to surrender themselves. Patti Smith, in the pages of Creem magazine (where she was a contributor), recalled the sensation years later:

“The singer was showing his second layer of skin and more than a little milk,” she wrote. “Five white boys sexy as any spade . . . Blind love for my father was the first thing I sacrificed to Mick Jagger . . . masculinity was no longer measured on the football field.” At the time, Smith was a closet rebel teen from Jersey, a good Catholic girl. The T.A.M.I. Show performance presented options.

They started right into “Around and Around” with skinny Mick dressed in a sweater and clapping along to the beat at the mic. He looked much amused at all the sexed-up chaos; soon that old smirk returned to his lips as if to say, “This wasn’t so bad after all.” They played “It’s All Over Now.” Mick, finally having fun, changed a lyric from “She hurt my eyes open” to “She hurt my nose open.” He repeatedly jumped into the air as if trying to use the stand as a pole-vaulting stick. He danced a bit more than usual; you can see him experimenting with his own body. Here, perhaps, the Mick Jagger of ’69 was truly born — out of necessity and, in a way, an innate sense of morality. MORE

BEN RATLIFF:  Today in The New York Times Janet Maslin reviews Marc Spitz’s new book, “Jagger: Rebel, Rock Star, Rambler, Rogue.” She liked the book, and so do I. It argues against the prevailing and increasingly boring theory that Keith Richards is the Stones’ main claim to authenticity, the soul of the band, the principal force of their sound and songcraft, and that Mick Jagger is a shallow socialite poseur. If you were persuaded by Keith Richards’ strong attitudes in his memoir, “Life” — which has sold a million copies worldwide in under a year, according to a recent statement by its American publisher — you may believe in this theory yourself. […] Mr. Spitz’s book doesn’t go too far into it, but there are a number of Stones songs allegedly written entirely — words and music — by Mick Jagger alone, or with other people who are not Keith Richards, or with minimal input from Keith Richards. They are not trifles: they’re among the Stones’ greatest, an alternate canon. For amusement, here’s at least a partial list, an album’s worth. MORE