TMZ: “Jackass” star Ryan Dunn was the driver in this morning’s fatal crash … this according to cops who also say Dunn’s car was “fully engulfed in flames” when officials arrived to the scene.  The West Goshen Township Police Department says officers found Dunn’s 2007 Porsche 911 GT3  “off the road and in the woods.”  Both Dunn and his passenger “died as a result of injuries sustained in the accident.” Cops will release more information on the passenger once officials can positively identify the body. Cops say “speed may have been a contributing factor to the accident.” MORE

RELATED: On June 20, 2011 at approximately 3:30 a.m. EDT, Dunn died in a car crash in West Goshen Township, Pennsylvania.[8] Reports from TMZ state that he posted a photo of himself drinking with friends hours beforehand onto Twitter (PICTURED, BELOW) At the time of the accident, Dunn was believed to have been traveling over 110 mph (180 km/h). An unidentified occupant of the vehicle was also found dead at the scene.[9] WKST-FM reported that both men had suffered severe burns; Dunn was reportedly identified by his tattoos and facial hair.[10] 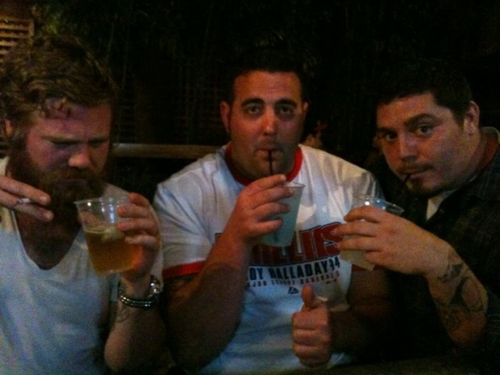 RELATED: Dunn, with his timberwolf beard and hound dog demeanor was usually portrayed as the “nice guy” of the group, the one victimized by his smart ass buddy Bam or a multi-party prank gone wrong. He was mocked for his crappy tattoos, lambasted for his taste in cars and women, and almost always wound up walking away from a confrontation hazed and hurting. Granted, this was all part of a paradigm set up specifically for the show. No matter what the image offered up by Jackass and Viva La Bam, Dunn off-camera was probably very different. The more intriguing thing is that he was, perhaps, exactly the same. One of the simple pleasures one could glean from the otherwise offensive mix of bodily fluids, unnecessary risk, and a lack of common sense was/is that this was a gang who really loved each other, a fart-sniffing fraternity where membership meant being bros for life. While it could have all been a reality show ruse, it didn’t seem that way. There was also a death wish dynamic present mixed with a new media desire to broadcast every element of your frequently stupid life. For someone like Dunn, who appeared to be limited in other social and career skills (there are references throughout both series that he had an auto/bike customizing business on the side), the whole CKY to stardom phenomenon must have seemed unreal. After all, from making homemade skater tapes in your buddy’s backyard to suddenly earning millions from major studios is every aimless post-millennial adolescent’s new YouTube dream. No work. All gain. All glory. MORE

JOHNNY KNOXVILLE: Today I lost my brother Ryan Dunn. My heart goes out to his family and his beloved Angie. RIP Ryan , I love you buddy. MORE

RELATED: Dunn took part in the characteristic stunts that made Jackass famous. While taping a skit for Jackass: The Movie, Dunn was driving a golf cart with Johnny Knoxville as his passenger. The idea was that Dunn would launch the golf cart over a sandtrap and into a plastic statue of a giant pig, and the statue would be crushed. However, the statue did not crush, but instead forced the golf cart into the air and it landed upside down. Dunn was thrown from the cart, and Knoxville landed on his neck with the cart on top of him. In the commentary for the movie, Bam noted Dunn’s bad driving. Another skit in Jackass: The Movie featured Dunn placing a toy car into his rectum. The car was placed inside a condom and was covered in lubricant. He then visited a doctor and complained of pain in his tailbone. An x-ray session revealed that a small car was lodged in his body bringing surprise to the doctor. MORE

Toy Car Up the Butt
Jackass: The Movie at MOVIECLIPS.com

UPDATE: It has come to our attention that there is a rumor kicking around the Internets that Ryan Dunn’s death is a cruel hoax perpetrated for the benefit of the next Jackass movie. This is just troll bait. In the interest of clarification, we are posting the official West Goshen Township police department press release on the fatal car crash that killed Ryan Dunn. 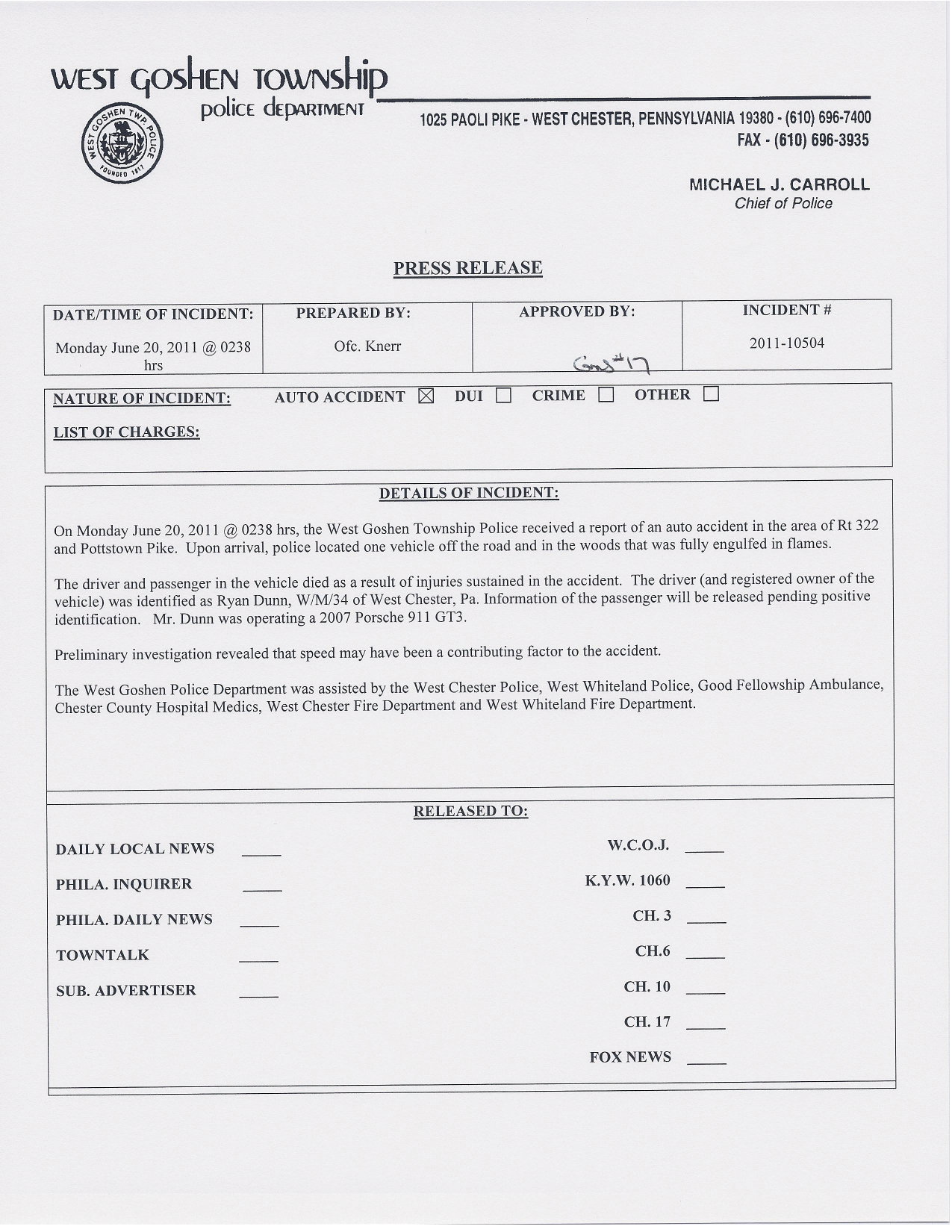