“THE REVOLUTION WILL NOT BE TELEVISED”~a CLASSIC from BABA GIL SCOTT-HERON from jabari akhenamen on Vimeo.

THE GUARDIAN: The musician and poet Gil Scott-Heron – best known for his pioneering rap The Revolution Will Not Be Televised – has died at the age of 62, having fallen ill after a European trip. Scott-Heron’s spoken word recordings helped shape the emerging hip-hop culture. Generations of rappers cite his work as an influence. He was known as the Godfather of Rap but disapproved of the title, preferring to describe what he did as “bluesology” – a fusion of poetry, soul, blues and jazz, all shot through with a piercing social conscience and strong political messages, tackling issues such as apartheid and nuclear arms. He was best known for The Revolution Will Not Be Televised, the critically acclaimed recording from his first 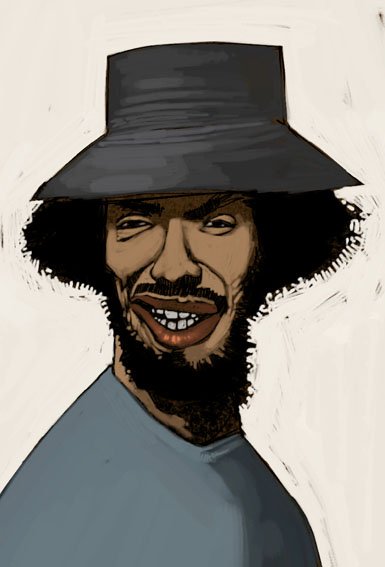 album Small Talk at 125th and Lenox, and for his collaborations with jazz/funk pianist and flautist Brian Jackson. In The Revolution Will Not Be Televised, first recorded in 1970, he issued a fierce critique of the role of race in the mass media and advertising age. “The revolution will not be right back after a message about a white tornado, white lightning or white people,” he sang. MORE

NEW YORKER: Gil Scott-Heron. Scott-Heron is frequently called the “godfather of rap,” which is an epithet he doesn’t really care for. In 1968, when he was nineteen, he wrote a satirical, spoken-word piece called “The Revolution Will Not Be Televised.” It was released on a very small label in 1970. It is the species of classic that sounds as subversive and intelligent now as it did when it was new. Scott-Heron calls himself a bluesologist. He is sixty-one, tall and scrawny. Writer visits Scott-Heron at his apartment where he was watching a tape of the Rumble in the Jungle fight between Muhammad Ali and George Foreman. “I like to see unbelievable odds because that’s what I’ve been facing all these years. When I feel like giving up, I like to watch this,” Scott-Heron said. Some of the people the writer spoke with said they preferred to remember Scott-Heron as he had been before he had begun avidly smoking crack. MORE

PREVIOUSLY: The Revolution Will Be Narcotized