“[Jimmie Dale Gilmore‘s] voice would make even Hank Williams cry,” Nicholas Dawidoff once wrote in The New York Times Magazine. Gilmore, a singer from West Texas, writes songs that would be described as alternative country. But he sings honky-tonk country classics on his album Come on Back , which he discussed in a 2005 interview with Terry Gross. The album, a tribute to Gilmore’s late father, contains versions of his father’s favorite songs like “Walkin’ the Floor Over You” and “Pick Me Up on Your Way Down.” “[Pick Me Up] represents an entire style that I really associate with [my father],” explained Gilmore. “It’s honky-tonk dance music … and it is one particular [song] he really loved. I have this one memory of him with his head tossed back and his eyes closed just grinning when this song came on.” In addition to his solo albums, Gilmore records with the band The Flatlanders, which includes Gilmore’s fellow West Texas musicians Joe Ely and Butch Hancock. He played the character Smokey in the 1998 movie, The Big Lebowski.

minutes — but her importance is out of proportion to those numbers. She was born Virginia Patterson Hensley in 1932 to parents living in the hills of West Virginia, and was performing as a teenager under the name Ginnie Hensley. In 1953, she married Gerald Cline, a construction worker. A year later, she signed a contract with Four Star Records, which was mostly a vehicle for recording songs from its owner’s publishing house. 4 Star put out 18 songs of the 51 she cut for them, and only one charted. The recording of “Walking After Midnight” is actually a remake of the original, which, like all her other 4 Star records, was hard-core country. These recordings were made at Owen Bradley’s famous Nashville studio, Bradley’s Barn, where Decca’s country recordings were made. The minute her 4 Star contract expired in 1960, she signed with Decca, and Bradley saw a chance to record a great pop talent. For her first record, “I Fall To Pieces,” he found a song by Hank Cochran and Harlan Howard, two of the best writers in town. The instrumentation on “I Fall To Pieces” (which included steel guitar by Ben Keith, who later worked with Neil Young) was country, but her phrasing definitely wasn’t. The song shot to No. 1 on the country charts early in 1961 and got to No. 12 on the pop charts. Bradley’s intuition was correct, so he started looking for jazzier numbers from his songwriting acquaintances. A young Texan friend of Cochran’s came up with one — called “Crazy” — which did even better. Until “Crazy” hit No. 1 on the country charts and No. 9 on the pop charts, Willie Nelson was considered a bit too eccentric for Nashville’s tastes, but the song established him and his career took off. MORE 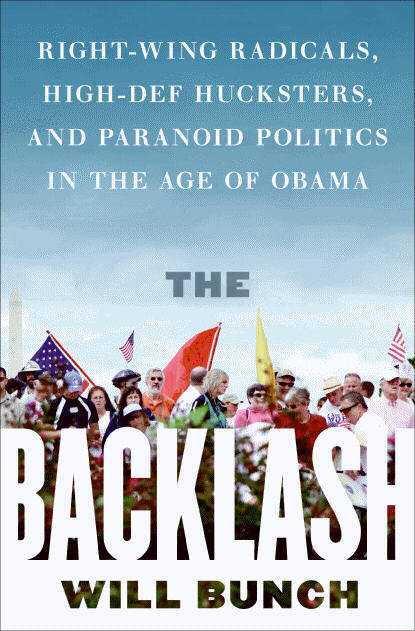 In November 2008, the election of Barack Obama was supposed to usher in a new age of hope, optimism, and postpartisan politics. Instead it provoked unparalleled anger on the far right that eventually twisted important national discussions and pushed ideas from the conservative fringe into the mainstream media. In the ensuing months, countless pollsters and reporters have tried to understand the heart of this mob that appeared so suddenly, but none of them has successfully accounted for the hard-right movement’s rapid growth or explained the hidden connections between its parts. Until now.  In this gripping exposÉ, Pulitzer Prize-winning reporter Will Bunch reveals the secrets behind the crusade against Obama, exploring how forces like radical militia groups, the Tea Party, pro-gun zealots, and Glenn Beck have combined old-fashioned populist outrage with digital-age phobias to produce a wave of resentment that many have ridden straight to the bank. Pulling back the curtain on the paranoid politics of a new generation, Bunch shows how events such as the election of America’s first African-American president, the economic recession, the rise of social networking, and the phenomenon of Glenn Beck have created a dangerous political moment that poses legitimate risks to democracy in America. From conspiracy theorists to secessionists, birthers to “independent” Tea Partiers, Bunch illuminates the ties among this new array of groups. Going beyond easy caricature, he strips away layers of rhetoric to reveal politicians like Paul Broun, who, as one of the most extreme members of Congress, works as hard for right-wing ideologues as he does for his economically battered constituents, and groups like the Oath Keepers, a fast-growing, ultraradical organization that spreads unsubstantiated fears of Obama confiscating guns and placing U.S. citizens in concentration camps. In addition, Bunch exposes the opportunists who have embraced a new brand of apocalyptic fearmongering, which has made them millions but has also led to the widespread paranoia that has helped fuel a rise in antigovernment violence. The end result shows the true stakes of this political perfect storm, demonstrating how the anger of the far right now threatens to consume America. Powerful, shocking, and thought-provoking, The Backlash is a controversial look at where our democracy is—and where it may be heading.

The New Pornographers is overflowing with talented musicians. You’ve got Dan Bejar and his Destroyer persona, the inimitable Neko Case, and the burgeoning Kathryn Calder. But the unifying thread throughout the band’s five albums has been lead vocalist and chief songwriter Carl “A.C.” Newman. David Dye catches up with Newman in this session of World Cafe, and the band performs songs from its new album, Together, at the Trocadero Theatre in Philadelphia.