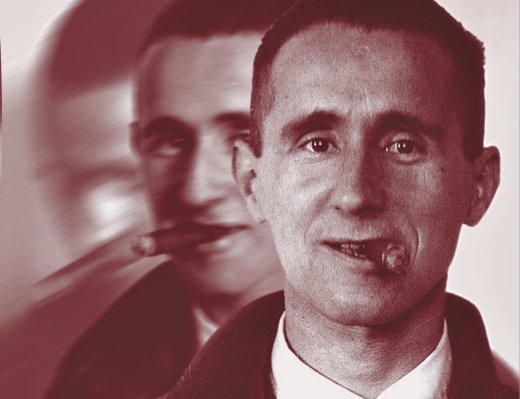 BY LINDSAY HARRIS-FRIEL ARTS CORRESPONDENT Getting tired of people throwing around the word “socialism” without knowing what it means? How about trying to be a good person in a bad world’ You might need to have a chat with the good Shen Teh next week at Walking Fish Theatre. Who’s the good Shen Teh? Well, she’s a really nice girl. In fact, she’s so nice that the gods gave her enough money to get out of prostitution and start her own tobacco shop. Unfortunately, her modest prosperity attracted an army of freeloaders. She had to resort to some extreme measures to draw the lines. In time, the goodness of Shen Teh’s whole world, including the gods, comes into murderous question. Capitalism, profit, gender, the nature of good and evil, and society itself are all dissected in this poignant fable based on Chinese legend.

Bertholt Brecht [PICTURED, ABOVE]’s classic play The Good Person of Szechwan has never been more relevant than it is now, especially in Kensington, where the Walking Fish Theater is based. Stan Heleva has adapted this epic play for puppets, and directs a cast of five puppeteers and a live musician. Michael Dura (Ohio Impromptu), Jodi Gross (Les Liasons Dangeruses), Michelle Pauls (Entertaining Mr. Slaone), Carol Raviola (Fuddy Meers) and Johnny Smith(Henry V) take on a cast of thousands with wit and verve. Melissa Santangelo (The Oubliette Ensemble) performs original music composed by herself and Max Guerin (The Absinthe Drinkers), bringing more of Brecht’s poetry to life.

Remember last year when everyone was dancing in the street after the election? If you believe in hope, change and compassion, this is a play that examines what things really cost, and what one has to go through to maintain those gifts. Each puppet is an original work of art, designed and created by Zac Palladino (East Kensington Bear Baiting Association) and Leslie Rogers (Puppet Uprising). Here’s a behind the scenes clip, where Stan Heleva tells us more, with shots of the earliest versions of the puppets:

The Good Puppet of Szechwan runs from November 6 through November 22. Tickets are $16, $12 for students.