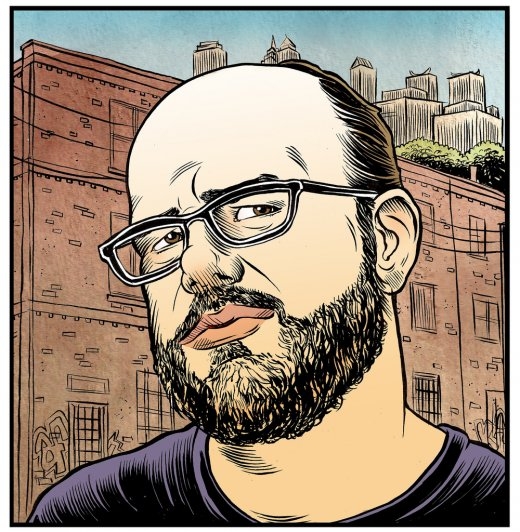 AUTHOR’S NOTE:  Today I Saw was a series of short imagistic non-fiction narratives I did back in 2007.  I didn’t even conceive it as a series for publication, it was really just a bunch of scenes and images I jotted down while doing field work as a social worker.  I was doing intensive community based work with homeless families, and writing about all the crazy things I saw in the field helped me decompress at the end of the day from the stress and pressure I was under at my often emotionally-grueling job. Phawker approached me about writing for them after a couple well-received cover stories I did for the Philadelphia City Paper, and trying to work the notes I had taken into a regular column made sense.  It ran twice a week for a year straight.  Each installment begins with the same phrase, “Today I Saw” because I was literally writing down things I was seeing in the neighborhoods, as I was seeing them each day.

shopping on Kensington and Frankford Avenue in them almost every day. The neighborhood old heads don’t appreciate the trend; I’ve spoken to many older black and Latin men and women in North Philly who see the development in End Time terms. They say we’ve fallen real far when chronic unemployment is so acceptable and expected that young girls don’t even bother putting on pants or shoes before leaving the house any more. When Ruthie sees these girls she says, “How can a girl wear her bed clothes to go shopping? It makes me think she ain’t washed her a-s-s today.”

The woman holding the bike had on a pink camisole top, and a green and red dragon soared up from under its fabric, a big tattoo reaching nearly to the nape of her neck. Her face was hard, pulled tight with anger as she leaned in to say loudly right into the little boy’s ear, “You say, ‘Excuse me.’” The little boy was maybe seven, wearing a pair of shorts and a T-shirt in need of washing. He sneered and rolled his eyes as he turned his head away: He wouldn’t pay attention to the woman let alone give her the respect she was looking for. He stared across the street and said, “I told you to watch out.”

The woman cupped his cheek and pulled his face back towards hers, demanding that he look at her. She raised her voice up another notch. “You say, ‘Excuse me.’” The kid yanked his face out of her hand; as he pulled away he said loudly, “I told you to watch out.” The woman put her mouth back up to the boy’s ear and screamed, “YOU SAY EXCUSE ME!” and as she did the kid yelled back, raising up to start pedaling, “I told you to watch the fuck out you fucking nasty bitch!” The boy pedaled off, cruising slowly to show he wasn’t scared. The woman screamed at him, telling him to watch his back when he comes around, she might have one of her boys from the block teach him some manners in a way he’ll understand. The kid grabbed on his crotch and told her to suck his dick without looking back at her.

AFTERWORD:  I practically lived on D Street in West Kensington during 2007, the most violent year in recent memory for Philadelphia.  I had a client family there whose needs were so deep and varied that they lived in a constant state of crisis and required a tremendous amount of time and attention from me as their social worker.  It was the kind of family that had been put out of every homeless shelter in the city, had contact with just about every social service agency under the sun.  When my agency came in contact with them they were living in an abandoned house in West Philly that had no heat, electricity, stairs or even floorboards.  They used a loose piece of sheet rock for a front door.  It was mid-December and there were two little children in the home huddled by kerosene heaters.  So we moved them to D Street, where we had available housing.  Even though we suspected their needs would be beyond our small agency’s ability to serve, we tried because we felt that given the circumstances not trying was not an option.

A number of Today I Saw installments focused on West Kensington, an extremely poor neighborhood plagued by crime and drugs.   Like much of the series, these installments were intended to capture elements of urban poverty’s ugliness that most people in Philly never experience.  The ugliness of many Today I Saw installments jarred and even offended many readers.  I understand that.  However, the reporting is faithful and the details accurate.  Around the time this installment was written police raided a home a few doors down discovering a substantial stash of heroin and also a malnourished 12 year old boy in the basement where his parents kept him in a filthy cage like a dog.  How do you put a positive spin on these ugly aspects of life in Philly’s poorest neighborhoods?  You don’t, and you do readers a disservice if you try to.  The only other option is to not write about them, because you feel some things are so awful they shouldn’t be written about.

With Today I Saw I encouraged readers to not look away from the ugliest side of life in Philadelphia.  Looking away doesn’t make it disappear. I recently rode past the house on D Street where my clients lived.  It was boarded up, left empty.  I don’t know what happened to the family.  I imagine that after failing to thrive in yet another social service program they returned to squat in another abandoned home.  This is a fact of life as a social worker; sometimes your long hours of hard work for low pay in dangerous neighborhoods amount to nothing.