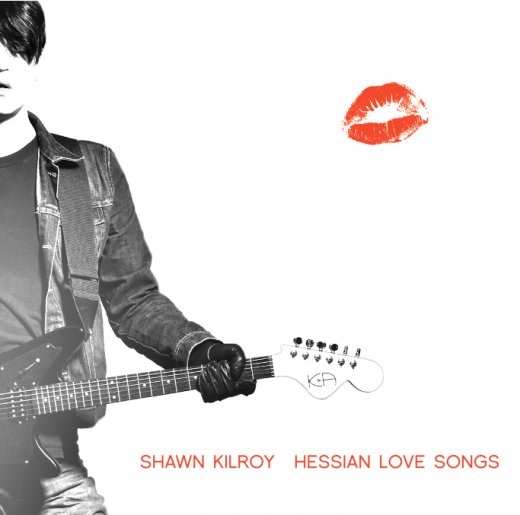 BY ED KING This Saturday — AKA Valentine’s Day, for all you lovers out there — Shawn Kilroy & The Dream Queens (Mike “Slo-Mo” Brenner, Jamie Mahon, Jenny Prescott, and Mark Landlord) debut Hessian Love Songs, the final installment of a trilogy of albums that started with 2004’s Neon Gate followed by Thai Stick Dragon, at Tritone. As might be expected of Kilroy – whose bio counts him as a “lover” along with the usually lonely combo of musician, singer, artist, film-maker, and thinker – ladies will not be charged admission.

Lover that he is, Kilroy’s never shied away from proclaiming his affection for England’s proto-goth, mid-’80s, moody pop — bands like Depeche Mode, Orchestral Manuevers in The Dark and Love and Rockets. Much of that time and place scared the bejesus out of me when I would go upstairs at Revival to take a piss, making sure not to knock anyone’s line of coke off a urinal. Revival was a mixed bag in Philly’s rock and dance scene during the late-80s, but I loved it. Downstairs, in a big, open, noisy room in what used to be a Swedish sailor’s church, Revival put on underground rock shows: Camper Van Beethoven, TheMekons, The Godfathers, Tuxedomoon, Pere Ubu… Flaming Lips played there in support of Oh My Gawd!, when they were three barely known, hippie Okies playing teenage garage-band Floyd and Zeppelin soundalikes with bassist Michael Ivins operating a smoke-and-light machine with his feet. The sound pounded off the room’s exposed marble, plaster, and tile…in a good way. BOOM, BOOM, BOOM, BOOM!

Upstairs was another big, hard-bodied room that was even louder. Upstairs at Revival was another world, welcoming or threatening you, depending on your musical persuasion, with the persistent BOOM! of an electronic kick drum. All kinds of hot, long-legged men and women would be dancing to that mindless electronic twaddle. Downstairs as the typical indie rock mix of underground rock fans — record store clerks, bookstore clerks, recent college grads and dropouts, mysterious older guys who seemed to be at every show and who must have done something to pay the bills — nodded along to a band’s encore, the Lost Boys and Girls would be making their way upstairs. After a show, the rock kids would sometimes sneak upstairs to have a peek at the after-hours scene, but rarely did the twain ever meet. One night after a show I stood in the middle of that mess and tried to figure out if there was any way I could fit in, if there was any hope for getting laid. It didn’t go well. After ten minutes, I had to get out of there before I gave into the overwhelming urge to go TravisBickle on the joint. What was that Dead Milkmen parody of late-’80s club culture, “You’ll Dance to Anything?”

In the light of day I would sometimes run across with people who actually liked the music from that scene and heard it as more than a cue for a toot and a quickie in the bathroom. Bauhaus, for instance, recorded its share of actual rock ‘n roll, spooky mascara and all. That post-Bauhaus crowd, in particular, knew how to construct some pop hooks, and I could hang with that crowd without wishing for a hard rain to fall. It’s those rare, reasonable music fans who used to get their kicks upstairs at Revival who come to mind when I listen to Kilroy’s Hessian Love Songs — the tuneful, romantic side of that scene as well as late-’70s Roxy Music, with the dark corners tucked away neatly. I wish the album’s production could have shined a little more light on those corners, bringing out some of the “Sister Midnight” sleaze lurking in the arrangements, but Brenner’s prominent lap steel and guitar work on songs like “Haunted” and “Full Moon” drive home the big hooks nicely. On “The Wizard of Dance” Kilroy shines his black light on the album’s most dance-heavy track. Kilroy’s insistent delivery on this ode to a goth Tony Manero is both lovingly joyous and tongue in cheek. At times, as on “Your Island,” with the drum machine turned down and the band gettin’ kinda mellow, Kilroy provides that welcome moment when the slovenly indie-rock dude and the goth chick might have seen each other from across a crowded Revival and shared a brief, flirtatious moment.