» 10:05 a.m. Obamas arrive at White House for coffee with the Bushes

» 11 a.m. Motorcade departs for the Capitol

» 11:30 a.m. Bushes and Obamas proceed to platform on the West Front; California Senator Dianne Feinstein will issue the call to order and deliver brief welcoming remarks, followed by an invocation from Dr. Rick Warren and a performance from Aretha Franklin (who also sang at Bill Clinton’s first inauguration)

» 12 p.m. Barack Obama is sworn in as president by Supreme Court Chief Justice John Roberts. Obama, with his hand on Abraham Lincoln’s inaugural Bible, will recite the same oath as his predecessors: “I do solemnly swear (or affirm) that I will faithfully execute the office of president of the United States and will, to the best of my ability, preserve, protect and defend the Constitution of the United States.” Musical performance from John Williams, Yo-Yo Ma, Itzhak Perlman, Gabriela Montero and Anthony McGill, followed by “Hail to the Chief” and a 21-gun salute 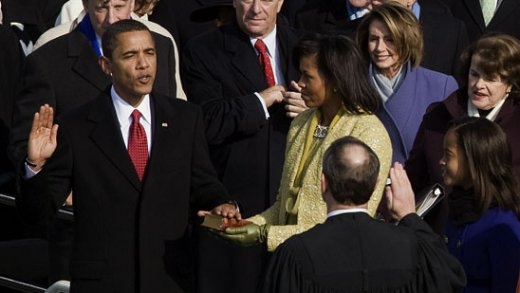 » 12:05 p.m. Inaugural address, followed by a poem written and recited by Elizabeth Alexander and a benediction from Dr. Joseph Lowery. The national anthem will be performed by the U.S. Navy Band Sea Chanters

» 2:30 p.m. President Obama leads the parade from the Capitol along Pennsylvania Avenue to the White House BONUS: Shepard Fairey will be on Fresh Air Today!

BONUS 2: Cheney In A Wheechair! LA TIMES: At first I thought, ”Riiiiiight … ” The Bush White House, on its last night in power, announced that Vice President Dick Cheney pulled a muscle in his back while moving boxes. He’ll be in a wheelchair for the Obama inauguration. Dick Cheney — a man with a ticker so bum that even Dr. House couldn’t help him — is moving boxes? Don’t those people have people to do all that menial schlepping for them?And then I thought, hmmmm, what kind of boxes would be so important that the almost-ex-vice president would be moving them himself? And then I thought … oh, those kinds of boxes. Boxes full of papers that he doesn’t want anyone else to see, ever? Boxes destined for his home shredder? That would be, uh, back in Wyoming? A week before Christmas — which was about three months after a federal judge had ordered Cheney’s office to preserve all his official records — Cheney’s lawyers were back in court, blathering that only the vice president can decide which records from his eight years in office should by law be handed over to the National Archives by … oh, what’s that deadline again? Oh yes — noon on January 20, when he ceases to be the vice president. The same date when, according to the Associated Press story about the court case, Cheney could be ”potentially taking millions of records that might otherwise become public.” MORE

ASSOCIATED PRESS: A federal judge ruled Monday that Vice President Dick Cheney has broad discretion in determining what records created during his eight-year tenure must be preserved.

CHANGE: Why I Voted For Barack Obama Because the rest of the world believes in this man, and contrary to what some would have you believe, that is a good thing. In fact, it’s crucial.

Because words matter and he is a man of his word.

Because he appealed to our best hopes instead of our worst fears.

Because he ran on the content of his character, not the color of his skin.

Because despite all that, he had to be twice as good.

Because he is neither black nor white and neither is the world we live in.

Because he never got off the high road.

Because he always did the right thing.

Because he never made a false move.

Because this is historic. This is noble. This is progress.

Because he IS a once in a lifetime candidate.

Because I never thought someone like him would come along again in my lifetime.

Because I thought they killed off his kind — the ones who came in the name of love — by 1968.

Because it turns out you can kill a man but you cannot kill the hope he represents. Just ask Jesus Christ.

Because sooner or later another one will come along.

Because the modern Secret Service is like Men In Black without the aliens. So I don’t worry.

Because for the last 30 years we tried it their way, and look where it got us.

Because he was right about Iraq from the beginning.

Because he represents something that shakes the powers that be to their very core: Change.

Because power never surrenders without a dirty fight, they say that he is wrong or lying or dreaming or worse.

Because the last 19 months have proven he is none of these things.

Because it has all come true. — JONATHAN VALANIA