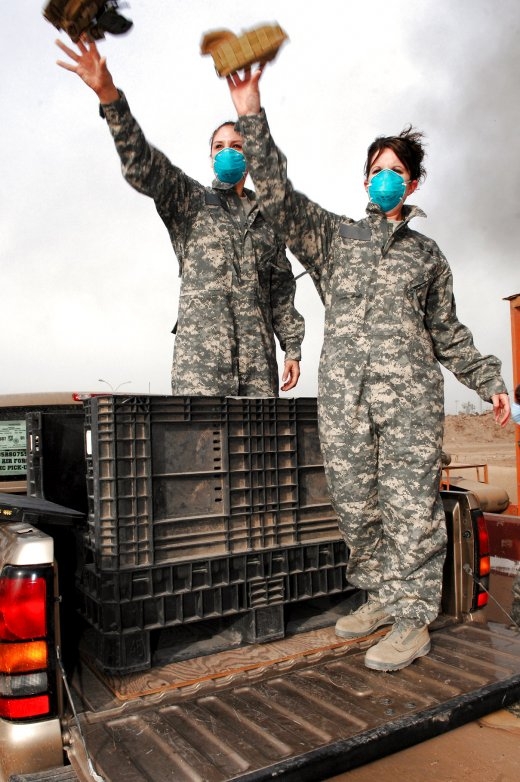 FAREWELL TO HARMS: U.S. Military personnel toss everything from unexploded ordinance to amputated limbs onto the burnpit at Balad Air Base in northern Iraq, creating a near-constant toxic plume that can be seen and smelt for miles.

BY ELIZABETH FIEND LIVING EDITOR Balad, the largest military base in Iraq is home to about 25,000 U.S. military personnel as well as several thousand civilian contractors. In December 2006, Air Force Lt. Col. Darrin Curtis, a bioenvironmental flight commander for the base, reported that there is an acute health hazard with possible chronic implications associated with the disposal of waste, via a burn pit, at the base. According to an article in the Salt Lake City Tribune, “The great plume of black smoke that rises above the burn pit at Balad Air Base is such an invariable part of the horizon that software engineers writing a program to help fighter pilots navigate their way onto the base made it a central part of the digitally simulated skyline.”

Most military outposts use burn pits to dispose of their garbage and waste. However the military has never had any standards on how the pits are managed even though they’re routinely used to obliterate objects that are either toxic in-of-themselves or contain toxic elements. At the pit in Balad plastics, rubber, paint, medical waste, unexploded ordnance and petroleum products are among the noxious items being burned on a regular basis. Burning these items produces smoke that contains known toxins such as benzene, Freon, formaldehyde, carbon monoxide, cyanide and

The pits in Balad are even used to dispose of amputated limbs. Yes add the smell of burning human flesh to what the soldiers call “plume crud.”  Airman Aaron Rognstad wrote on his blog Blog Flack “The burn pit is probably one of the worst things on this base. I don’t know how the Air Force, or whoever is in charge of this base, can think that they can just burn all of this toxic s— and have 30,000 people inhale it on a daily basis. The burn pit is probably the reason I am having constant headaches.”

Other soldiers have sinus problems, chronic coughs with black phlegm, and bronchitis. They’re worried about the future as well. The toxins burning at the pit are known carcinogens that may cause leukemia and other types of cancer. Consider that more than 100,000 U.S. service personnel have rotated through Balad Air Base during the course of the Iraq war. And that’s not even factoring in the impact on the surrounding Iraqi population. Burning garbage, toxic or not, creates ultra fine particles that float away on the air. These particles find their way in to the local soil and water ultimately finding their way in to the food chain through contaminated plants and the fatty tissue of animals. Military officials deny the risk. MORE