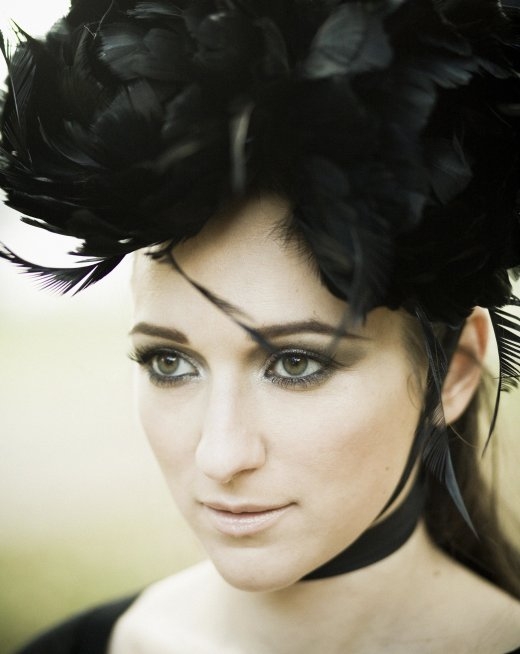 BY DAVE ALLEN There’s no way around the too-easy metaphor: My Brightest Diamond is a gem. The project by talented singer and multi-instrumentalist Shara Worden is now on its second record, “A Thousand Shark’s Teeth,” and has crafted a richly haunted sound, steeped in both late Romantic chamber music and the seamy vocal stylings of Jeff Buckley, Bjork and Billie Holiday. Worden came by her classical roots honestly: she has a degree in opera. After a musically eclectic childhood in Ypsilanti, Michigan and musical studies at the University of North Texas, Worden set out for New York City. Her opera studies continued, but she ended up connecting with wunderkind Sufjan Stevens, singing backup on his records and playing in his Illinoisemakers band. In advance of her show Friday at the First Unitarian Church, she told me about using every available limb in Sufjan’s band, the difficult choice of abandoning opera for pop, and the presence of dance and puppetry in her live show.

PHAWKER: What is it about Michigan? Between you and Sufjan Stevens, you get the impression the state is just bursting with musical talent.

SHARA WORDEN: Well, for me, I went to a middle school and high school that had an amazing choir program. I got to go to competitions and go to Europe, and we had really fantastic musicals. There was a music teacher and his wife who really spearheaded that program.

PHAWKER: What did you pick up from Sufjan? He really came from out of nowhere and had a remarkable amount of success, and it seems you have a similar sense of orchestral sweep and density.

SHARA WORDEN: The experience of playing with him was more of a certification in terms of being a performer. Even though I agree with him on a lot of things, we come from very different places in classical music and in pop music. I don’t feel like musically we inhabit the same space. There’s something in the way we use metaphors, though, to tell stories, and we both like really epic, grand, sweeping gestures. I feel I have much more minimalist style, though.

PHAWKER: What instruments did you play when you were in his band?

SHARA WORDEN: Celeste, guitar, organ pedals, piano, a little xylophone, a tambourine. I pretty much needed to have every limb doing everything.

PHAWKER: How many different instruments do you play live now? Do you have a favorite?

SHARA WORDEN: I’m bringing my guitars, kalimba, and ukelele. I’ve done some drum programming, too, so I’ll hit some things. I don’t have a favorite instrument, but my favorite part of the show is a puppet show that we are doing. I sing an Edith Piaf song while the string players get up and enact this puppet show.

PHAWKER: What classical composers do you listen to most? I saw something about Purcell on your Myspace, and some of the album has a “When I am Laid in Earth” feel.

SHARA WORDEN: Debussy’s a big one, and Ravel: “Black and Costaud,” on the new album, is an exact lift of “The Aria of the Teapot” from his opera “L’enfant et les sortileges.” For “Workhorse,” I listened to a lot of Prokofiev, and Pierre Boulez – but you don’t really hear him. Also, Samuel Barber, who writes lovely songs. “Apples” and “Like a Sieve” are really in the light spirit of Barber. Of course, playing with the string quartet started with Purcell, and I did a recital a few years ago of songs by Edith Piaf and Kurt Weill. They were the composers who meant so much to me when I made the choice to do pop music and songwriting, and I had to reconcile myself with that choice. So I did this recital as a coming to terms and having to see that line.

PHAWKER: You still do your live show with a string quartet. How do you conduct or otherwise guide them during a show?

SHARA WORDEN: I don’t have to do much. I’ve played with them for five years, and they don’t need much from me. If something is going too slow, I’ll dance more rhythmically. We sort of have it worked out where we can mind-read each other.

PHAWKER: What’s the greatest challenge in writing parts and scores for all these instruments?

SHARA WORDEN: The greatest challenge has always been dealing with the problem of mixing the two big ones: mixing acoustic and electronic instruments, and also putting drums and strings together. They behave completely differently; it’s like having a mom and dad who are always fighting.Bjork and Peter Gabriel deal with that kind of thing by using electronic drums a lot, or Gnarls Barkley uses electronic violins, but I don’t like that sound. I’m an ambient-rock head, and that means the drums need to be loud, bu that’s in direct conflict with how to even mic a string, because they pick up everything around them. That’s why, in the future, I might get out of string writing, because it’s so frustrating.

PHAWKER: I know you’ve formed a human pyramid on stage before. How wild can we expect things to get with choreography and other stagecraft?

SHARA WORDEN: You can expect a lot of ass-jiggling and… that’s about it. Oh, and some puppet handling. The string players can’t really move; they’re just kind of there. We’re more like punk-cabaret.

PHAWKER: How about costumes?

SHARA WORDEN: In terms of costuming, we’re all dressed up and ready to go. The scene is black and white and – since you’re classical-minded, you’ll get this – it’s Pierrot Lunaire and the commedia del arte! It’s a little of that flavor with a dash of punk and a dash of cabaret. I designed the costumes, and Katrina, the other girl who used to sing withSufjan, is a wonderful seamstress and she made our costumes.

PHAWKER: Opera or rock-and-roll – which has better fans?

SHARA WORDEN: Oh, I don’t like that question! Well, the face of opera is really changing. I went to see “Peter Grimes,” and there were so many young people! Also, for my birthday one year, Pierre Boulez came to Manhattan and I kind of stalked him. I got his autograph, but I couldn’t get a picture with him because of his bodyguards. In terms of fans, I don’t know. The thing for me is I was never an opera star. I did a few things, but what I really wanted was the ability to create. I didn’t have the patience for the other stuff, but that doesn’t mean I didn’t love it. I only know what I am, and I’m an opera fan.