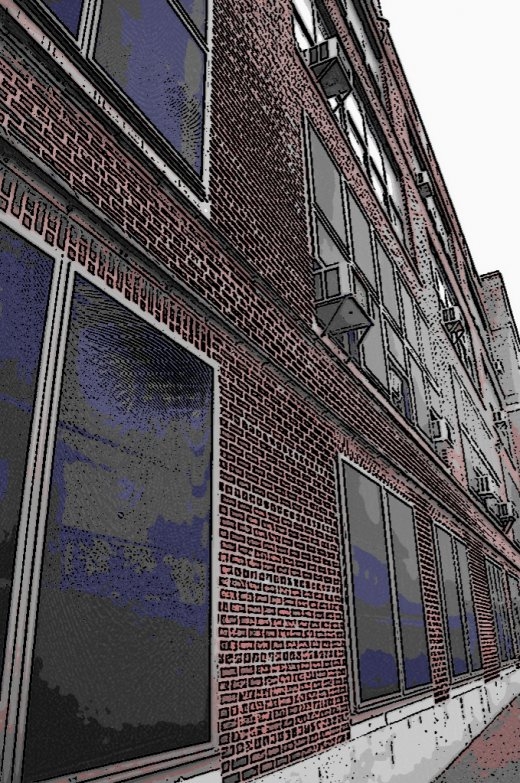 BY JEFF DEENEY As the morning wears on in room 315 cabin fever sets in. The students don’t leave the classroom at any point during the day except for brief staff-accompanied bathroom visits and for a short lunch break that doesn’t come until 1:30. On some days the group’s restlessness builds to a breaking point right before lunch that results in dangerous outbursts like students throwing furniture across the room out of frustration with their confinement. On other days the boys spirits’ are worn down enough by the slow passage of time that they become briefly willing to listen to a lesson. At the moment Mr.McMonigle’s attempts at teaching are still being rebuffed and the loud conversation that dominates the room is about what you would expect from a group of bored 15 year old boys.

“Man, who farted,” Eric calls out loudly from the back of the room while sneering and wrinkling his nose.

“I did,” Corey replies, giggling.

“Damn, dude,” Tony says thickly, pulling his head up off the desk where he’s been napping most of the morning, “that sound like a phone.”

Diquan voices his frustration with the day’s slow pace; he feels the class would be more interesting if the gender distribution was more even,

“Damn, man, why there ain’t no girls in here,” he asks, turning to Tony and smiling mischievously while rubbing his hands together under his desk. “We need some titties up in this jawn.”

At 10am the door opens and a dull eyed, stone faced light skinned kid comes strutting in the room without announcing himself. McMonigle looks up at him quizzically from his desk and asks politely,

“Yeah,” the student says in a mean drawl, “this my class.”

“Fuckin’ truant officers,” the student says, like he’s spitting something nasty tasting on the ground.

Miss Patterson blinks, momentarily astonished by the boy’s blunt tone; she puts her hand on her hip and says with a swivel of the neck, “Well, durn them for doin’ their jobs.”

She guides him to an empty desk along the wall where he can sit. Rather than sit down, the boy proceeds to push the desk until it slams into the next desk over, and then the one next to that. After lining up four desks side by side like this he climbs up, lies down across them, pulls his hood over his face, and goes to sleep.

Mr McMonigle jumps up to reprimand the boy and make him sit properly at a desk but Miss Patterson intercepts him, explaining that maybe it would be better to leave this student alone. This student, named Hakeem, is one of the serious hard cases you thought you’d find in a special classroom for kids with behavior problems in a public high school with a notorious reputation. According to Ms. Patterson, who lives in neighborhood, the boy is already an established street corner hustler from a family that has had a hand in the local drug trade for years. Ms. Patterson says she often sees the boy on her lunch break donned head-to-toe in designer clothes selling drugs in plain view of the school from a pizza shop directly across the street.

“He look like ole-head out there,” she says of Hakeem, who carries himself with an older man’s practiced menace, “all decked out in Polo; he stand on that corner like he hold the deed to the whole street.”

The boy also has a history of violent assaults in school; last year he attended only on a handful of days and was often ejected from the building for fighting not long after he arrived. He likes to get up abruptly in the middle of class and seemingly without reason or provocation pick a student at random to grab by the neck and punch repeatedly in the face. After being briefed on the child’s history Mr. McMonigle decides to let the boy sleep.

Just when the scene in room 315 seems hopeless, a futile waste of time and resources, education happens. Either the kids have worn themselves down enough by acting out all morning to concentrate, or maybe the extreme boredom and tediousness of confinement has weighed on them enough that they finally relent to the teacher’s persistence. Mr.McMonigle is reading from a history text book while the listless group occupies themselves; Eric is playing a handheld video game, Tony’s looking at the newspaper sports section and Diquan is staring blankly out the window. Something Mr. McMonigle says catches Corey’s attention, and for the first time today he’s contributing as a student.

“Did you say Sparta? I seen the movie about that jawn.”

Mr. McMonigle seizes the moment, knowing that the group’s attention, once caught, can be fleeting.

“That’s right, Corey, Sparta. Sparta like in the popular movie 300. Did everyone see 300? According to the story 300 Spartans defeated the entire Persian army. This is a similar story, but it’s about the Spartans and the Athenians, who were from Greece. Go ahead and pick it up right there, Corey, second paragraph on the page.”

Before Corey starts reading he momentarily hesitates, glancing around the room uncertainly to gauge his classmates reaction to his participating in class. Sometimes Corey tries to participate in class, but his classmates shout him down for being an ass-kisser so he starts acting tough again to get the group’s approval. Nobody seems to be paying attention this time, so Corey starts reading.

When Corey begins reading, it becomes glaringly apparent why he resists doing schoolwork. He stumbles over the simplest single syllable words. He’s struggling with every ounce of effort he can muster to get through a short passage in a history textbook written for third graders. Corey, despite being in the tenth grade, is functionally illiterate.

The entire time Corey’s reading, McMonigle is giving him encouragement, telling him how great he’s doing and helping him say the words he can’t figure out. When Corey finishes, McMonigle tries to keep the momentum going, getting Tony to read next. Tony, who is also functionally illiterate, reads in an even more halting voice than Corey’s but with McMonigle’s patient assistance he finally makes it through a paragraph. When Diquan’s turn comes up, he refuses, sending his classmates a shaming message for doing something corny like reading out loud for the teacher.

“Nah, man, fuck that, I ain’t readin’ shit,” he says, waving his hand over his closed text book like it’s a plate of food he refuses to eat, “Y’alls a bunch of faggots, man, y’alls kissin’ some ass.”

Mr. McMonigle moves on to Eric, who is equally uncooperative. Overtop his hand held game Eric voices a similar sentiment, saying in a disaffected tone that participating in class is lame and for pussies. But with some more prodding Eric, who is known by all to be by far the smartest kid in the class, grudgingly relents. Still holding his game aloft in one hand he breezes through the reading, intentionally ticking off sentences rapid fire to show how easy it is.

“There, I read your dumb shit, now leave me the fuck alone.”

He flips the books shut and goes back to playing his game.