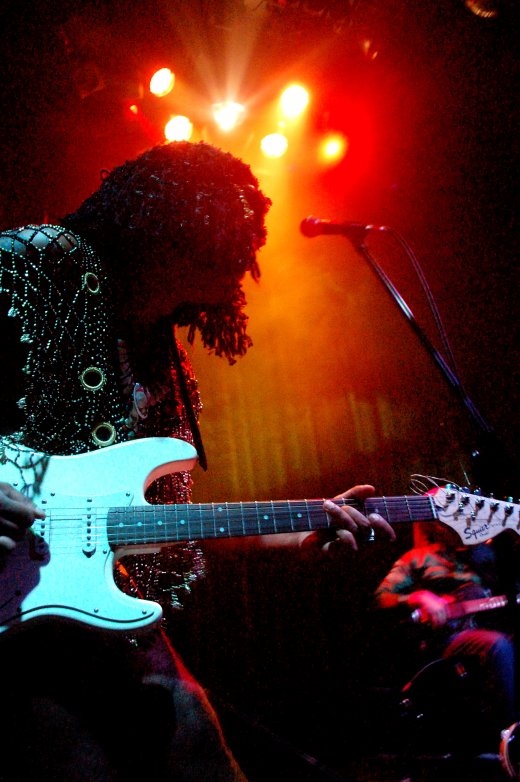 BY TIFFANY YOON I’ve been hearing a lot of good things about Love City, the opener for Johnny Brenda’s Black Friday show, but unfortunately, I missed their set, which is supposed to pull influences from psychedelic 70’s punk, 90’s grunge and 80’s new wave.  I did catch some words with the bass player Patrick outside, and he said they had some technical difficulties anyways.  He seemed pretty upset, and to top it off Jamie, the lead of Love City, walked by looking miserable and fairly wasted to cope.  He briefly stood next to me and a stranger outside, then quickly announced, “I’m going home”, ran off, then just as quickly turned around and ran back inside the bar.  Rough night for Love City, but the rest of the bill went pretty smoothly.

Jacuzzi Boys were up next.  These three Florida boys put on a great set, warming things up with some surf rock, but with a grittier southern twang rather than the classic California flavor mixed in with some psych and melodies suitable for Ian McCulloch to sing along to. Vivian Girls were next, and at this point it was clear this show was going to sell out before the end of the night.  I’ve tried to see this all female trio from Brooklyn so many times, but for whatever reason always ended up missing out.  Vivian Girls are like The Friggs for my generation, but with shoegazer guitars and layered vocals that have a haunting spacey effect.

King Khan teamed up with Mark Sultan (the BBQ) and together they created The King Khan and the BBQ Show, not to be confused with Khan’s other band, King Khan and the Shrines, which are currently on a break.  So no, Khan’s cheerleader, who usually shares the stage with him, was nowhere to be found.  BBQ, who had a bright neon pink turban on his head, took off his red sneakers and socks and placed them next to his tiny drum set.  It kept unwrapping throughout their set, but he didn’t seem to care at all.  Khan is infamous for his ridiculous costumes and on-stage antics.  With his Sun Ra outfits and James Brown stage presence, his shows are hard to forget.  He and BBQ put on a show mixing swinging 50’s rock, 70’s psych and intermittent punk influences.  When thinking back to the night, I keep imagining Khan starting every song with a very Misfits sounding, “one two three four”, when he probably only did it for one or two.

During King Khan and the BBQ’s set, Gabriel Alcala from Jacuzzi Boys came on stage wearing what looked like a child’s dinosaur costume — a leotard that showed off his tighty whities were layered underneath.  Not the prettiest sight, but definitely the funniest.  Then Gabriel and the Jacuzzi Boys drummer Diego Monasteri grabbed an aluminum foil tray full of what looked like a catered salad from backstage heavily doused in oily dressing and some sort of stinky cheese and threw its leafy contents all over the stage and audience.  If it weren’t so late and everyone weren’t so drunk it probably could’ve gotten ugly.  One guy nearly knocked me over pushing me aside to wipe some cheese from his hands onto the carpeted stage of Johnny Brenda’s.  He ran towards the stage with his arms flailing as if they were on fire and he let out a kind of hiccuped gasp of relief after wiping them clean.  I thought to myself, what a bastard.  I felt bad for the clean-up crew that would have to follow this act.