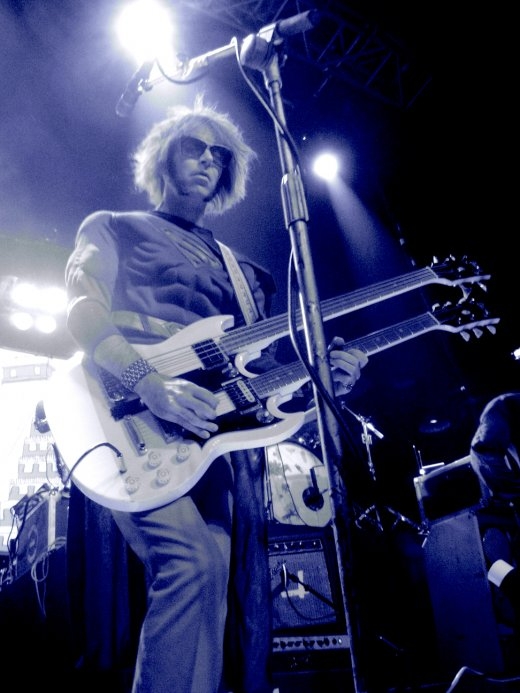 I AM SUPERMAN: Of Montreal, Electric Factory, Friday Night

BY JONATHAN VALANIA FOR THE INQUIRER The only constant with the Athens, Ga., indie-pop band Of Montreal – over the course 11 years, nine albums, five EPs and innumerable personnel shifts – is change. In its decade-long evolution from twee psych-pop for second-wave Elephant 6ers recording collective to its current status as the definitive, post-everything party band for barely 20-somethings, Of Montreal’s mantra has remained the same: Change or die. Likewise, the band’s live show is a study in perpetual flux. During the course of the band’s two-hour tour de farce Friday night at the Electric Factory, the songs – zillions of them, it seemed, all with arch, overwrought neo-Gilded Age titles like “Wraith Pinned To Mist and Other Games” and “Beware Our Nubile Miscreants” – zoomed by in a giddy rush of psychedelia, bubblegum, and Bowiesque glam.

Embracing a theatricality long eschewed by most of their indie brethren, Of Montreal dazzled the eyes as much as the ears. In addition to the six-piece band – arranged on stage terrace-style, with dual drumkits perched on 12-foot-high risers bookending the stage, each member donning Superman costumes complete with faux Man-of-Steel musculature – a small cast of actors staged mini-dramas center stage, dressed alternately as poker-playing cowboys, gun-crazy soldiers, acrobatic black-clad ninjas, and the robed-and-hooded celebrants of some esoteric occult ritual.

The ringleader of this circus is helium-voiced frontman Kevin Barnes, who was not afraid to rock the Speedo if the song called for it – and, apparently, there are at least three songs in Of Montreal’s songbook that can be sung only in some skimpy variation of the men’s racing swimsuit.

In addition to handling the lead-singer duties, Barnes often starred in the mini-dramas, appearing as a mummy, a centaur, a Roman senator, a red-skinned demon, and a bored and decadent pope. Likewise, the dance-happy near-capacity crowd – curiously young for a band that has been around so long – masqueraded in all manner of lurid Halloween finery.

Drawing largely from the just-released Skeletal Lamping, Of Montreal stoked the crowd’s boogie fever with an unending hit parade of their own recent past, only twice veering off self-penned material, with well-executed covers of the Clique’s “Superman” and Nirvana’s “Smells Like Teen Spirit,” a song that just turned 17 years old. (Now that is scary.)