INQUIRER: Police identified the victims as Jose Ortiz, 45, of the 3200 block of Rorer Street and Roberto Beltran, 38, of the 2900 block of Howard Street. The victims dropped immediately and were declared dead at the scene. Police were still trying to determine whether both men, with criminal histories, were targets.Police said one of the men killed was a suspect in other killings in the area, and authorities said yesterday’s slayings might have been retaliation. The crime scene was at an open-air market on West Indiana Avenue near Mutter Street, where casual merchants do a brisk business selling a variety of mostly secondhand goods: furniture, mattresses, appliances and the like.

It’s also, authorities said, an area where drug dealers and users blend among those hawking goods, and where they can use the rail line to quickly escape police. One teenager, who arrived at the scene hours after the shootings, said: “We’re going to find who did it and get him.”

Hours later homicide detectives were heading back to the neighborhood for a second double homicide. Shortly after 9 p.m. last night, two men were fatally shot in the 2300 block of North Marshall Street in North Philadelphia, said Officer Jillian Russell. Barry Johnson, 33, of the 500 block of West York Street, was shot in the head and pronounced dead at the scene by medics at 9:25 p.m.

Rubin Rasheen Eason, 28, of the 2300 block of North Hancock Street, was shot in the head and arm. He was transported to Temple University Hospital and pronounced dead at 9:41 p.m. A 23-year-old man was shot in the back during the same attack. He was taken to Temple and was reported in stable condition. No arrests were reported.

Last night’s shootings and the earlier slayings took place close to the open-air market, that, while not legal, has been there for decades and attracts many shoppers, dozens of whom gathered yesterday to watch police investigate. Police said the intersection at Indiana and Mutter was controlled by one of the victims, who ran one of the stalls and oversaw a profitable drug operation.

Homicide Capt. James Clark confirmed yesterday that one of the victims was among those selling street goods. He would not release details of the investigation but said detectives were looking closely at all drug connections.

After the shooting, the gunmen, who wore dark hooded sweatshirts and khaki pants, took off down a hill behind the graffiti-marked garages and along the tracks. Police found a hoodie that one of them might have discarded, but there was no sign of the high-velocity rifle used in the killings.

“When someone uses that kind of firepower out on the streets of the city, especially during the daytime when there’s a lot of people out here, as you can see, it’s very concerning to the police,” Clark during an afternoon press conference at the scene yesterday. “And we take it very, very seriously.”

Benito Rodriguez, 66, sells furniture on the street and heard the gunshots. “Boom, boom, boom. Everybody heard it,” Rodriguez said. There were so many shots that Pedro Porra, 50, also selling furniture nearby, said “it sounded like a fiesta” with partyers celebrating with gunfire. They were not surprised, they said, to hear that two men were killed and said that last week a man had been found dead, shot in the back, not far away.

Both men closed their businesses, as did most others yesterday. Police filled a three-block corridor where a command post had been set up, and high-ranking officials, including Commissioner Charles H. Ramsey, converged on the scene. Residents said drugs were rampant. One couple said they rushed home from work to make sure their children, who attend a nearby elementary school, were OK. Although the streets were crowded at the time of the shooting, not many children were out, neighbors said. MORE

EDITOR’S NOTE: This TODAY I SAW from May of 2007 takes place at the open-air market where the first two murders occurred, setting into motion a change reaction of retribution that has left five dead in 22 hours. 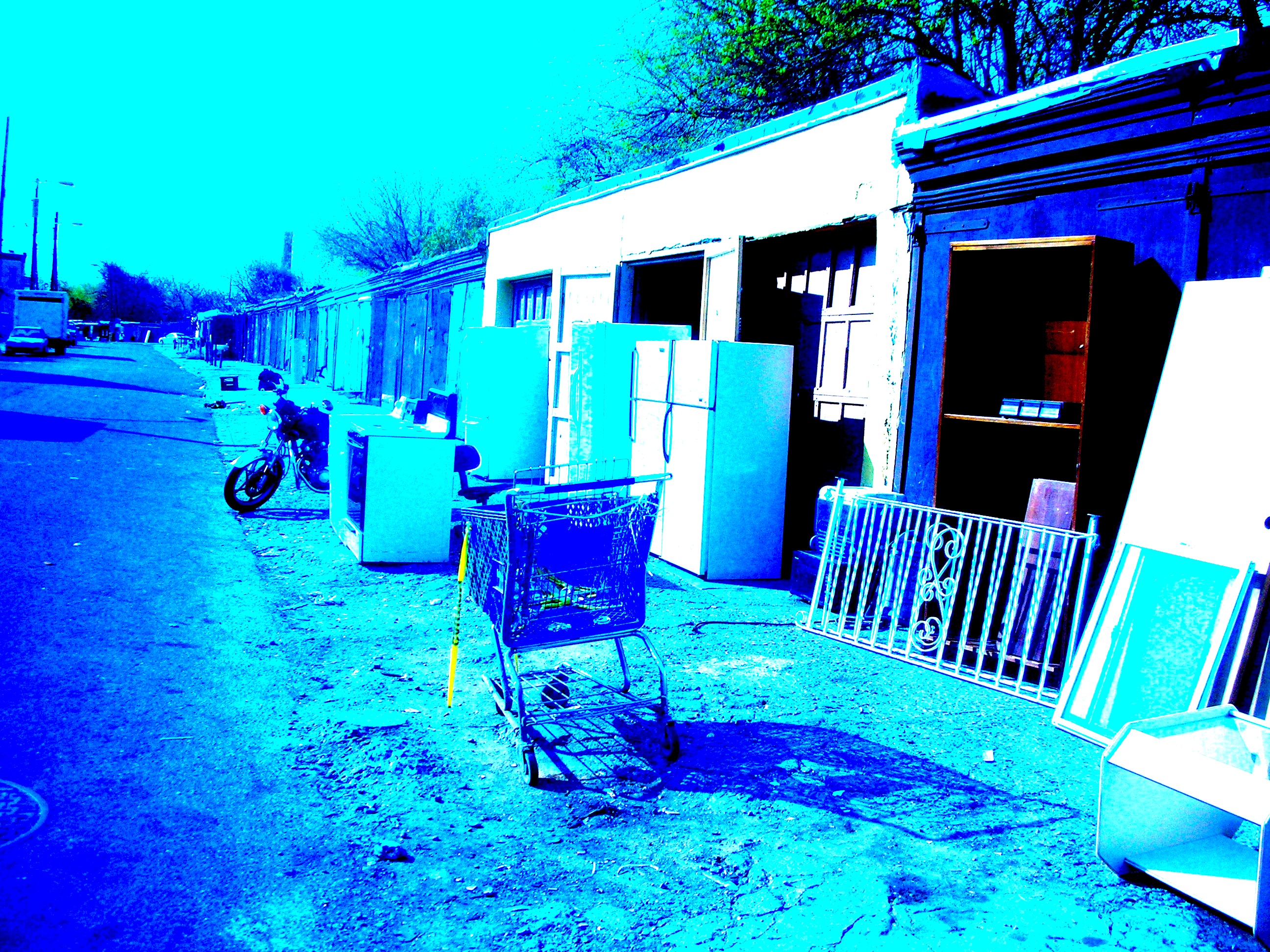 BY JEFF DEENEY Today I saw is a series of nonfiction shorts based on my experiences as a caseworker serving formerly homeless families now living in North and West Philadelphia. I decided not long after starting the job that I was seeing so many fascinating and disturbing things in the city’s poorest neighborhoods that I needed to start cataloging them. I hope this bi-weekly column serves as a record of a side of the city that many Philadelphians don’t come in contact with on a daily basis. I want to capture moments not frequently covered by the local media, which tends to only cover the most fantastically violent or sordid aspects of life there.

Today I saw The Garages open under a warm afternoon sun, their contents arranged on the crowded, narrow strip of sidewalk that lines Indiana Avenue between Front and Second streets. The Garages are a strip of metal storage containers set back from the street in a patch of grass that butts up against the train tracks running under Front Street. The containers stay closed all winter, looking like foreboding and forgotten industrial sheds that might have once belonged to the railroad. They’re painted gunmetal grey and green, and are kept shut with padlocks and thick chains.When the spring arrives the chains come off and the doors open to reveal storage spaces packed with used furniture, refurbished appliances, secondhand housewares and aged electronics.

The proprietors of The Garages are Latin families with pictures of the Blessed Mother and the Sacred Heart taped up to the container doors. They sit under beach umbrellas sipping soda or playing dominoes on the glass-topped tables they’re selling. A motley assortment of people moves along this tight stretch of backstreet, a place where two cars passing in opposite directions can barely pass each other. Neighborhood men linger on the corners drinking cheap canned beer, and addicts scurry past looking deathly ill. Some cars pass The Garages moving too fast to be safe near so much foot traffic; the drivers are young white guys in newer-model cars who just copped from nearby drug corners and are beating feet back to DelCo or Jersey to get that shot off. Their impatience with the street-clogging crowds shows on their faces as desperate pain.

The best time to hit the Garages is Friday or Saturday, because the auctions are on Thursday. The vendors get their wares from self-storage facilities that liquidate the contents of delinquent container accounts once a week. At self-storage auctions, you don’t see the contents of a container before you bid; you use its exterior dimensions to form your bidding strategy. A big container might net you a two-bedroom house worth of furniture for $20. Other times, other bidders drive the price up and for $250 the winning bidder gets a busted-ass old love seat and a rusty bed frame. The auctions are a little like gambling, and some are better at it than others.

I made small talk with the vendors, some of whom were very friendly and made easy conversation. Some probably thought I was from L&I or maybe a plain-clothes cop; they stiffened a little at my approach and gave terse answers without making eye contact, though I asked innocent questions about bassinets and coffee tables for my clients. When I left The Garages I looped around the block to get back on Front Street and when I passed the corner of Howard Street and Cambria, a young Latin boy sitting on a BMX bike announced, ‘dopedopedope’ three times real fast. There was a school directly across the street that was letting out for the day, and I could see DRUG FREE SCHOOL ZONE signs posted all around as a swarm of small children made their noisy way toward the corner.

ABOUT THE AUTHOR: Jeff Deeney is a freelance writer who has contributed to the City Paper, Philadelphia Weekly and the Inquirer. He focuses on issues of urban poverty and drug culture.