BY JOHN “Phawker Tech Guy” REFANO They had arena sized amp rigs – I counted at least 12 speaker cabinets and 8 amplifiers for the 4 piece band. Brutal. The light show was intense. My eyes were literally tearing up. They had some great background visuals, but the strobes were what was killer. It added to the performance though. Kevin and Belinda don’t have much for stage presence, as could be expected. The rhythm section, Debbie Googe and Colm O Ciosoig, put a little more physicality into it. I don’t have the exact setlist (I’m sure its online somewhere), but it was a nice mix of older singles, songs from Isn’t Anything, and of course a good selection of songs from Loveless. Hearing the songs from loveless in a live setting was great. On the record the drums have little/no punch, and the guitars are much more textured and subtly mixed. Live, its almost punk rock. The rhythm section was suddenly much more important, especially for the later stuff. Belinda Butcher is still cute after all these years. They ended the set with two of my favorites – “Feed Me With Your Kiss” followed by “You Made Me Realize.” The noisy part at the end of “You Made Me Realize” was extended… to be around 10-15 minutes, I think. It was hard to keep track as it kept getting louder and louder, building up to the point that it was some of the most oppressive noise imaginable. It happened gradually enough for you to wonder how much louder it could possibly get, which it inevitably did. By the end I was starting to worry about the massive lighting rig coming loose and the whole building collapsing on itself. This is not hyperbole – my ears were ringing the next day and I wore earplugs (the signs at the venue said “MBV recommend using ear plugs”, and they were giving them out for free in massive quantities). Oh, by the way, it was AWESOME. 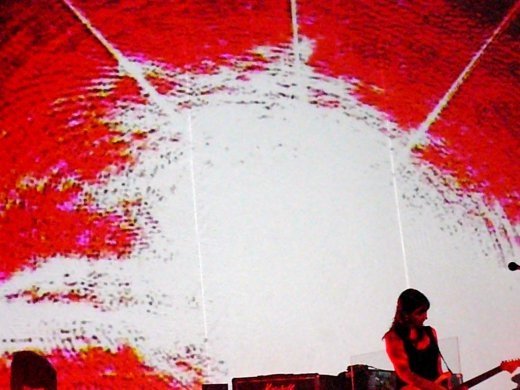 RELATED: After trying to be patient and put on a brave face about things since the end of June, I’m gonna have to face up to how angry at myself I am but also how resentful towards one of my favourite bands I have become because basically – three months on from seeing My Bloody Valentine’s Sunday show at the Roundhouse, the hearing problems I experienced afterwards haven’t gone away, in fact they’ve got worse.  Initially I had reduced volume hearing, ‘swimmer’s ear’, then – more worryingly – earache and pain which would occur even from the sound of coins dropping in the til at work. However, over the last few days this has developed into tinnitus. The reason I’m writing this at such an ungodly hour of the morning is because I’ve not been able to sleep cause of the grinding machinery-like noise I’ve had in my right ear for the last few hours. MORE