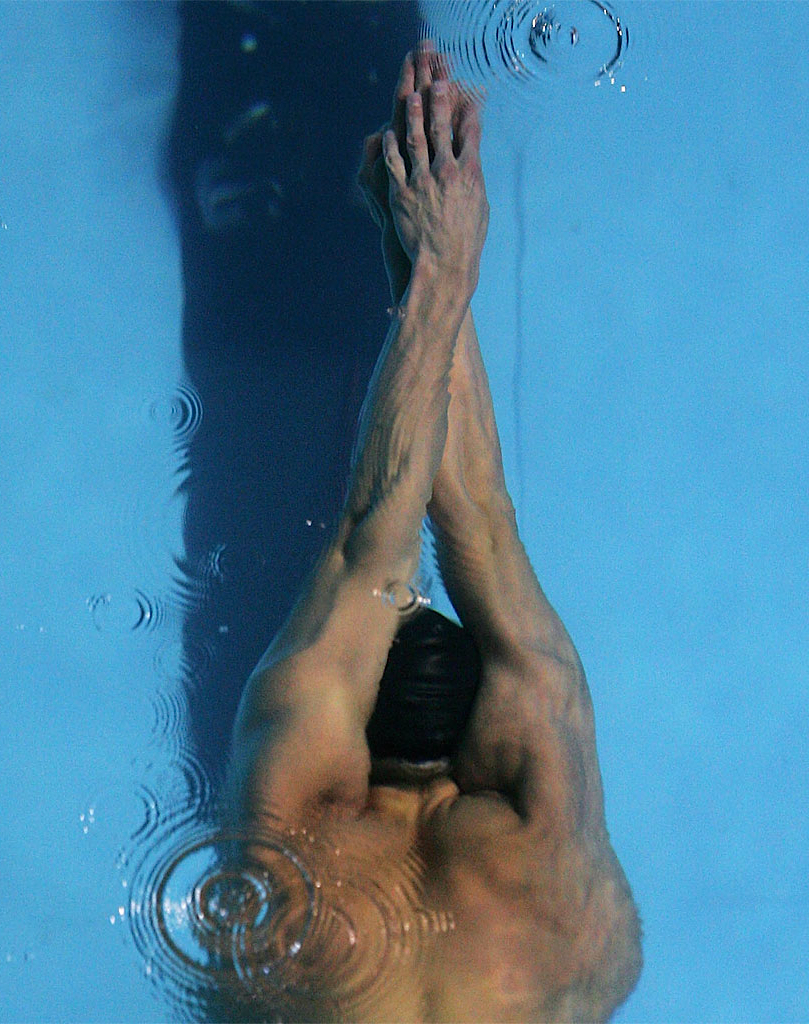 BY ST. JOHN BARNED-SMITH OLYMPIC CORRESPONDENT Yesterday, I wrote about Dara Torres and the slant-eye scandal. I promised I’d write about Crocker and Lochte today, but I’m feeling sorta “ehh…” about them, so we’re going to talk about strokes instead. For the swimmers among us, this will be Remedial Swimming 101. I apologize. Everyone else, listen up. (And double apologies for the vids, which are of course as campy as I could possibly find.) There are four competitive strokes currently swum in the Olympics today – the freestyle (i.e., the crawl stroke), the backstroke, the breaststroke, and the butterfly. Of these, the freestyle is by far the fastest. Swimmers use a “flutter kick,” keeping the legs straight while flexing their ankles, and a tremendously fast overhand stroke, and perform flip turns off the wall. Top swimmers can reach around six miles an hour while swimming this stroke, and competitively, will often swim anywhere from half the length to the full length of the pool without breathing.

Backstroke is similar, but on your…wait for it…back. You want to rotate your body down its “centerline,” that is, the straight line you could draw from your nose to your crotch. Oh, it’s a lovely stroke! Remember it’s important to keep one’s butt compressed upwards so as not to assume a near-sitting position while swimming. Hence, the shouts “keep your butt up!” [Heh-heh. Swimming is SO gay. –The Ed.]Hence, why I sucked so hard at the backstroke.

Next comes breaststroke, source of endless 7th grade snickers [Tee-hee, you said ‘breast.’ — The Ed.], and probably the one you know how to swim. It’s basically taught as “the garbage you collect with your hands, and then push away,” with the frog kick thrown in. It’s a resting stroke, typically, but watch the Olympians do it. In most races, competitive swimmers go only a couple of seconds slower than their fastest freestyle times. The breaststroke is also important because it’s actually had a major development between the last Olympics and the Beijing games: The dolphin kick. In the 2004 Games, a Japanese breaststroke specialist named Kosuke Kitajima, won the gold in the 100 and 200 meter breaststroke races. He narrowly beat out Havertown native Brendan Hansen, in part by taking one dolphin kick off his starts and turns. Here’s a vid of it:


It’s one kick – just one kick, but remember from my last dispatches – a quarter of a second is the difference between a medal and fourth place. There was enough controversy to change how the stroke could legally be swum – Kitajima’s maneuver is now fair game for all swimmers in the 08 Olympics.

And then there’s muthaf*cking butterfly. If there’s anything that will destroy your body, your self esteem, and any traces of respect for your physical abilities, it’s the butterfly Basically, you’re doing pull ups through the water while wiggling in perfect unison with your arms, all the while hitting your breathing just right – the whole length of the pool. Any imperfection in your stroke makes it exponentially harder. I can’t tell you how many times I was reduced to a floundering bitch by this stroke. At one meet I was in, a buddy of mine, who was about as ripped (and hairy) as Wolverine, swam the 200. Now for any event, 200 meters gets tiring. The 200 meter takes a special kind of masochist. My teammate made it about 160 meters before stopping outright, catching his breath, and finishing the race. Swimming fly is like getting punched in the soul by God. Pretty to watch though. BARELY LEGAL. Now, a word about the Chinese. In case you’ve not been paying attention, China has been taking a lot of heat. First, there were the broken promises to expand press freedoms and then the digitally altered opening games, and then the realization that the Chinese had lipsynched a seven-year-old girl’s performance because she wasn’t “attractive” enough. Yes, a rough bit of press for the Chinese. However equally riveting is the furor that’s, um, developed over China’s gymnastic squad. Basically, after the 2004 Olympics, the IOC decreed that all gymnasts had to be 16. Sound unreasonable? I don’t think so either. Well, at least two, and probably three, of China’s gymnasts are nowhere close to that old. Though China’s Olympic body has denied the charges and presented official documents (passports an’ such,) numerous articles in Chinese publications have listed the girls’ ages as 14, and even 13! A couple of them clearly are missing teeth and the smallest member of the team weighs 68 pounds and stands 4’9″. Of course, the Chinese see this Olympics as their coming out party, and want as many golds as possible, but seriously, this is no less egregious than the doping scandals. A smaller gymnasts can rotate faster, when she isn’t hampered by extra height, weight, actual breasts, hips, or any junk in the trunk. There have been other controversies – like growth stunting and abuse, but the blatant cheating here is truly amazing and appallingly bad sportsmanship. That’s all for now, folks. ABOUT THE AUTHOR: St. John Barned-Smith first discovered the water when his mom made him take swim lessons as a toddler. He swam on competitive swim teams – sporadically – from 4th grade through his senior year in high school, before walking on the Case Western Reserve Swim team, where he got his ass handed to him on a daily basis. (Seriously, he was the slowest kid there.) Nevertheless, a swimmer for life, he’s been glued to the swimming events of the Olympic games ever since the Thorpedo (Ian Thorpe) became a phenom during the 2000 Olympic Games in Sydney. He’s sending these dispatches as a way to decmpress while writing in the Chicago-based Academy for Alternative Journalism, a paid journalism fellowship which hopes to disprove Phawker’s Editor-in-Chief about the dwindling relevance of print.