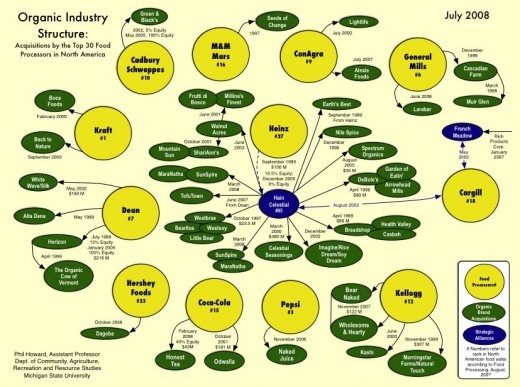 BY ELIZABETH FIEND LIVING EDITOR There’s a crisis in the organics world, and it’s called big business. Too much of a good thing has gone haywire. Organic food is so much in demand these days that there simply isn’t enough to go around. As a result, manufactures of organic products have had to outsource. What was once an industry of small family farms has mushroomed into a new kind of agribusiness, with direct financial ties to the likes of Wal-Mart, Kraft, Kellogg and General Mills. Yikes. Big business is finding loopholes in the legal definition of organic and is taking the modern organic farm further and further away from the original, fundamental philosophies of organics. There are already consumer boycotts against organic companies such as Horizon Farms, makers of Silk soy milk, who may not be sticking to the philosophies. In fact, organic standards have deteriorated enough that there’s a whole new classification for farms that do follow the philosophies: Deep Organics.

Now ask yourself this: Is it really better to buy an organic bell pepper – one that doesn’t have any pesticide residue — rather than one grown by agribusiness, if that organic pepper has been grown halfway around the world and then flown-in to your supermarket? Will that foreign-grown organic pepper taste better? Will it be fresher? Is it better for you? What is the environmental cost? Don’t try that “Finally! A good excuse not to eat vegetables and fruits” stuff with me, either. Even eating macaroni and cheese, chicken nuggets or ice cream will expose you to the insecticides DDT, and chlorpyrifos-methyl and malathion. Cheese and ice cream come from cows and chicken nuggets from . . . I guess, chickens . . . which eat plant-based food treated with pesticides. The toxic residue is passed on to you when you eat animal products. So what’s a person to do if organic is losing its luster and food grown conventionally is treated with pesticides? Of course I’m going to tell you the answer. But I’m not going to do it here. For pointers, smart food choices, and the full Monty, please click over to the BiG TeA PaRtY Sustainable Living Center and Blog. MORE

CONSOLIDATED ORGANIC: AND THEN THERE WERE FOUR