How Philadelphia got its freak on.

It all started, for me anyway, at Brooke Sietinsons‘ walk-up loft/hobbit hole on Second Street, somewhere in that OK Corral-esque strip between the Standard Tap and the 700 Club. Even though she no longer lives there, the exact location will have to remain a secret because, technically speaking, L&I could still fine her for dispensing the Morning Glory seeds of Philly freak-folkdom without a permit. But the select initiates invited to these hash-pipe hootenannies — culled from some of the most remote and impenetrable redoubts of local bohemia — know where I’m talking about. A Jesus-haired figure sits crosslegged on the floor, illuminated by flickering sepia-toned film footage, strumming an acoustic guitar and ululating like Billie Holiday and Janis Joplin locked in dual cunnilingus 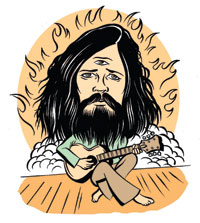 in a crater on the dark side of the moon. His name, I later learn, is Devendra Banhart. Soon enough, many will know his name.

Also on hand is one Greg Weeks, a recent transplant folker from New York and a dead ringer for Woody Allen in Sleeper. Together with Sietinsons, Ophelia-voiced Meg Baird and a revolving cast of red-eyed weird beards, Weeks would form the Espers, a strummy collective of whispery acid-folk that evokes sugar-plum visions of woodland fairies doing the maypole dance around Stonehenge. Soon enough, many will know the Espers too.

Then there’s Tara Burke, aka Fursaxa, a diminutive dark-haired pixie who builds magnificent wheezing chimeras of sound out of droning single-chord Farfisa, submarine bells and whistles, and narcotic Nico-esque vocal swoon. Sonic Youth and the Japanese psych cognoscenti already know who she is. The rest is freak-folk history, exhaustively documented in Pitchfork’s archives. Fast forward to now.

All three have eagerly anticipated albums set for fall release. Devendra Banhart’s just-out Cripple Crow is crowded with freak-folkie cameos, including members of the Espers, and finds the valedictory Venezuelan branching out beyond recent forays into Nick Drake-style folksy melancholia, mixing it up with trad Spanish folk, straight-up rock and the usual epistles to dippy. Somewhere along the way he must have lost that tickle in his tonsils that made every syllable out of his mouth wiggle like a worm on a fisherman’s hook. Too bad.

In a few weeks the Espers will release The Weed Tree. This isn’t the new Espers album; it’s a collection of covers-some likely (Nico, Michael Hurley), some unlikely (Durutti Column, Blue Öyster Cult)-and a wonderful new original (“Dead King”) that threatens to sink into triple-A chick-folk treacle just before spiraling into a full-blown psychedelic freak-out. As ever, the band’s warm wigwam of sound evokes blood-sugar-sex-magik rituals celebrated by the hangman’s lovely daughters on lonely moonlit moors. In other words, this is what flowery noontides sound like in Kensington, where the band has since established a commune. Frankly, I wouldn’t be surprised to learn they live in a giant shoe.

Meanwhile, Fursaxa’s Lepidoptera, released last month, explores that phantasmagoric middle ground between godhead and schizophrenia. Some call it ecstatic peace. Others reach for the Haloperidol. Gorgeously produced by Bardo Pond guiterrorist Michael Gibbons, Lepidoptera is a dense and richly rendered tapestry of trance-inducing folkadelia. Truth be told, I can recommend this in good faith only to those pharmacological Magellans who have intrepidly navigated at least 33 or 34 acid trips. I can’t condone such behavior — it’s illegal and fraught with peril — but if you still insist on eating the lotus and squeegeeing your third eye clean, I suggest you listen to this. It’ll come in handy during that sometimes hairy fourth hour of tripping and help dispel the notion that your face is melting into your lap.

Man, I hate that.