WASHINGTON POST: Obama landed first in the southern Iraqi city of Basra, where the Iraqi army, with support from British and U.S. troops, has recently wrested control from extremist militias. The presumptive Democratic presidential nominee did not venture into the city proper, where about 30,000 Iraqi soldiers patrol the streets to keep insurgents at bay. Instead, he remained at the British military base outside town, near the airport, and met with top British, Iraqi and U.S. officials from the region. Officials said Obama–part of a congressional delegation that also includes fellow senators and Iraq war critics Chuck Hagel (R-Neb.) and Jack Reed (D-R.I.)–arrived in Basra at about 8 a.m. (The U.S. Embassy in Baghdad initially said the group had flown directly to the Iraqi capital from Kuwait, but later corrected that information.) The delegation remained at the Basra base for about three hours, receiving what Maj. Tom Holloway, a British military spokesman, called a “situational update,” then flew to Baghdad around midday. In the capital, the delegation was scheduled to meet senior U.S. and Iraqi leaders, including Army Gen. David H. Petraeus, Iraqi Prime Minister Nouri al-Maliki and Iraqi President Jalal Talabani. MORE 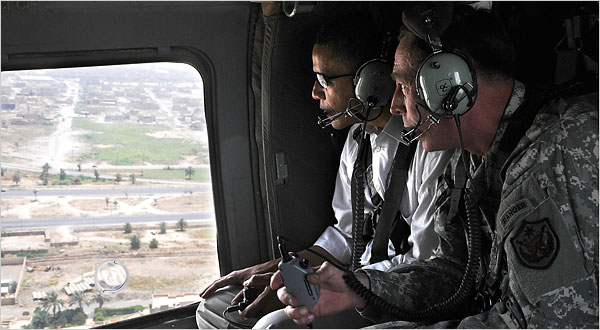