U.S. has wrongfully imprisoned in Afghanistan, Cuba and elsewhere on the basis of flimsy or fabricated evidence, old personal scores or bounty payments. McClatchy interviewed 66 released detainees along with a number of local officials, primarily in Afghanistan, and reviewed available U.S. military tribunal documents and other records.

Most of the 66 were low-level Taliban grunts, innocent Afghan villagers or ordinary criminals, the McClatchy investigation found. At least seven had been working for the U.S.-backed Afghan government and had no ties to militants, according to Afghan local officials.The McClatchy investigation concluded, however, that many of the detainees there posed no danger to the United States or its allies and were imprisoned because U.S. officials were fearful of mistakenly letting a militant go free. McClatchy’s interviews are the most ever conducted with former Guantanamo detainees by a U.S. news organization. The issue of detainee backgrounds has previously been reported on by other media outlets, but not as comprehensively.

McClatchy also in many cases did more research than either the U.S. military at Guantanamo, which often relied on

secondhand accounts, or the detainees’ lawyers, who relied mainly on the detainees’ accounts.The investigation found that although U.S. forces often didn’t know whom they were holding or how to obtain credible intelligence from them without enough trained interrogators and skilled linguists, prisoners were beaten and abused by military police, prison guards and intelligence officers. […]

The McClatchy investigation found that top Bush administration officials knew within months of opening the Guantanamo detention center that many of the prisoners there weren’t “the worst of the worst.” From the moment that Guantanamo opened in early 2002, former Secretary of the Army Thomas White said, it was obvious that at least a third of the population didn’t belong there. Of the 66 detainees whom McClatchy interviewed, the evidence indicates that 34 of them, about 52 percent, had connections with militant groups or activities. At least 23 of those 34, however, were Taliban foot soldiers, conscripts, low-level volunteers or adventure-seekers who knew nothing about global terrorism. Only seven of the 66 were in positions to have had any ties to al Qaida’s leadership, and it isn’t clear that any of them knew any terrorists of consequence. If the former detainees whom McClatchy interviewed are any indication — and several former high-ranking U.S. administration and defense officials said in interviews that they are — most of the prisoners at Guantanamo weren’t terrorist masterminds but men who were of no intelligence value in the war on terrorism. […]

Instead of making America safer, the administration’s detainee policies have radicalized detainees, fueled support for extremist Islamist groups, troubled even America’s closest allies and turned Guantanamo into a school for jihad, Islamic holy war.The administration may even have inadvertently sabotaged its ability to prosecute the terrorists it’s imprisoned, because evidence gained from interrogations that in some cases bordered on torture may not be admissible in military courts. If the Supreme Court rules in a pending case that detainees in the war on terrorism have a right to challenge their detentions in court, the entire legal edifice the administration has invented since 9-11 could collapse…

Nusrat Khan was in his 70s when American troops shoved him into an isolation cell at Bagram in the spring of 2003. They blindfolded him, put earphones on his head and tied his hands behind his back for almost four weeks straight, Khan said. By the time he was taken out of the cell, Khan — who’d had at least two strokes years before he was arrested and was barely able to walk — was half-mad and couldn’t stand without help. Khan said that he was taken to Guantanamo on a stretcher. Several Afghan officials, including the country’s attorney general, later said that Khan, who spent more than three years at Guantanamo, wasn’t a threat to anyone; he’d been turned in as an insurgent leader because of decades-old rivalries with competing Afghan militias.[…]

In 2002, a CIA analyst interviewed several dozen detainees at Guantanamo and reported to senior National Security Council officials that many of them didn’t belong there, a former White House official said. Despite the analyst’s findings, the administration made no further review of the Guantanamo detainees. The White House had determined that all of them were enemy combatants, the former official said.Rather than taking a closer look at whom they were holding, a group of five White House, Justice Department and Pentagon lawyers who called themselves the “War Council” devised a legal framework that enabled the administration to detain suspected “enemy combatants” indefinitely with few legal rights.

The threat of new terrorist attacks, the War Council argued, allowed President Bush to disregard or rewrite American law, international treaties and the Uniform Code of Military Justice to permit unlimited detentions and harsh interrogations. The group further argued that detainees had no legal right to defend themselves, and that American soldiers — along with the War Council members, their bosses and Bush — should be shielded from prosecution for actions that many experts argue are war crimes.

With the support of Bush, Cheney and then-Defense Secretary Donald H. Rumsfeld, the group shunted aside the military justice system, and in February 2002, Bush suspended the legal protection for detainees spelled out in Common Article Three of the 1949 Geneva Convention on prisoners of war, which outlaws degrading treatment and torture. The Bush administration didn’t launch a formal review of the detentions until a 2004 Supreme Court decision forced it to begin holding military tribunals at Guantanamo.

In late 2004, Pentagon officials decided to restrict further interrogations at Guantanamo to detainees who were considered “high value” for their suspected knowledge of terrorist groups or their potential of returning to the battlefield, according to Matthew Waxman, who was the deputy assistant secretary of defense for detainee affairs, the Defense Department’s head official for detainee matters, from August 2004 to December 2005.

“Maybe three-quarters of the detainees by 2005 were no longer regularly interrogated,” said Waxman, who’s now a law professor at Columbia University. At that time, about 500 men were still being held at Guantanamo. So far, the military commissions have publicly charged only six detainees — less than 1 percent of the more than 770 who’ve been at Guantanamo — with direct involvement in the 9-11 terrorist attacks. About 500 detainees — nearly two out of three — have been released.

How did the United States come to hold so many farmers and goat herders among the real terrorists at Guantanamo? Among the reasons:

–After conceding control of the country to U.S.-backed Afghan forces in late 2001, top Taliban and al Qaida leaders escaped to Pakistan, leaving the battlefield filled with ragtag groups of volunteers and conscripts who knew nothing about global terrorism.

—The majority of the detainees taken to Guantanamo came into U.S. custody indirectly, from Afghan troops,

warlords, mercenaries and Pakistani police who often were paid cash by the number and alleged importance of the men they handed over. Foot soldiers brought in hundreds of dollars, but commanders were worth thousands. Because of the bounties — advertised in fliers that U.S. planes dropped all over Afghanistan in late 2001 — there was financial incentive for locals to lie about the detainees’ backgrounds. Only 33 percent of the former detainees — 22 out of 66 — whom McClatchy interviewed were detained initially by U.S. forces. Of those 22, 17 were Afghans who’d been captured around mid-2002 or later as part of the peacekeeping mission in Afghanistan, a fight that had more to do with counter-insurgency than terrorism.

—American soldiers and interrogators were susceptible to false reports passed along by informants and officials looking to settle old grudges in Afghanistan, a nation that had experienced more than two decades of occupation and civil war before U.S. troops arrived. This meant that Americans were likely to arrest Afghans who had no significant connections to militant groups. For example, of those 17 Afghans whom the U.S. captured in mid-2002 or later, at least 12 of them were innocent of the allegations against them, according to interviews with Afghan intelligence and security officials.

—Detainees at Guantanamo had no legal venue in which to challenge their detentions. The only mechanism set up to evaluate their status, an internal tribunal in the late summer of 2004, rested on the decisions of rotating panels of three U.S. military officers. The tribunals made little effort to find witnesses who weren’t present at Guantanamo, and detainees were in no position to challenge the allegations against them. MORE 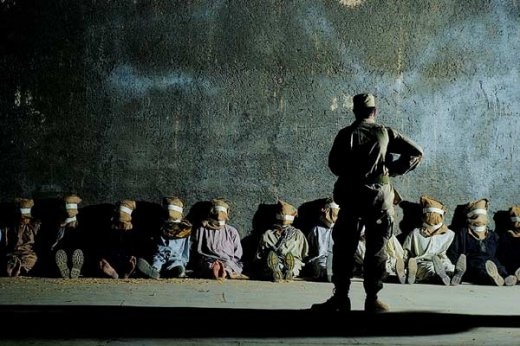 Even as someone who has never been a Hillary Clinton supporter, it is undeniable that her campaign brought out some of the ugliest sexism I’ve heard ever expressed openly in the media. Not everyone I’ve mentioned this to has agreed, luckily the Women’s Media Center have compiled an montage of all the sad insanity of the Primary Season. Tucker Carlson, Chris Matthews, Bill O’Reilly and other faves chime in on their thoughts on the differences between the sexes (with the late Tim Russert chuckling in the background), but never once will you think of Shakespeare.

DAN,
This is WHY we don’t watch TV anymore — nothing but assholes with halitosis wearing too much make-up. All of these people

should be advised to NOT to quit their day jobs. They are not long for the New Media world. Still, these are the worst abusers and they come across as so shrill and cartoonish that I doubt they changed anyone’s mind one way or the other and at worst just reinforced the prejudices/pathologies of an ever-shrinking minority. If you think about it, it’s pretty much all on Fox, with the exception of Daffy Duck Chris Matthews, and nobody takes him seriously. As for Tucker Carlson, the clock has just about run out on his brand of glib bow-tied charm. As for our friends over at the ‘Fair And Balanced’ network, my prediction is that Murdoch is gonna get with the winning team — he always votes with his wallet, not his ideology, that’s for his propaganda media outlets — and Fox will become as annoyingly pro-Obama For Dummies as they have been Heil Dubya for the last eight years. It is quite literally a puppet show over there, and puppets don’t pull the strings. Chin up, kid. Better days are around the corner.