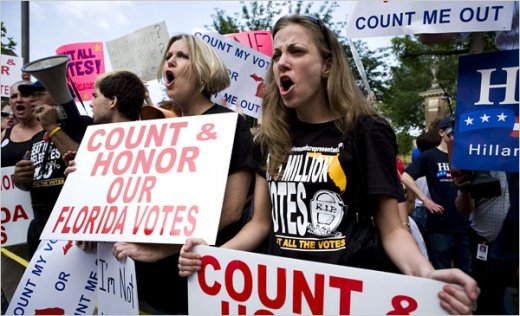 [EDITOR’S NOTE: The following views do not represent the views of the Editor.]

And yes, I’ll still vote for Barack Obama in November. But you should understand why I’m not feeling great about it this morning.

Now that it’s over, now that everybody’s been able to run their ecstatic headlines, can we all just admit that the MSM and the Yes! We! Can!-crazed online world had a deep desire to see Obama win, if only so everyone can soak in the aura of the New Kennedy or the first black president or the generational shift, or to have anything but the Clintons to write and talk about for another four or eight years?

Hillary Clinton’s announcement in her speech Tuesday night that she would be neither conceding nor endorsing Obama just yet seems to have mystified or angered a lot of people. Even my respected colleague Will Bunch seems to

have got it very, very wrong.

Here’s what that non-concession sounded like to my ears: Obama may have garnered a sufficient number of delegates to secure a historic nomination for the presidency. He may even beat John McCain, with the support of many Democrats who cast their primary ballots for Clinton — including me. But he certainly hasn’t “won” my vote.

Because for weeks now, I’ve watched Clinton rack up decisive wins in key battleground states, securing blocks of voters Obama will desperately need in November. Then I listened as each of those victories was called meaningless, simply unneeded because some formula spelled out in the daily Obama campaign email and understood only by cable news anchors had already determined that “mathematically, she can’t win.”

I heard the voters who chose Clinton in Pennsylvania dispatched with the descriptor “blue-collar whites,” which is a polite way of calling someone of a certain socioeconomic status — my parents, I guess — some uneducated racist white trash. Or in the case of West Virginia, Dogpatch hillbillies who shouldn’t even be allowed to vote.

Was that elitism, or just politics? I can’t decide, but I’m damn sure that’s what Clinton was talking about when demanded for “the 18 million people who voted for me to be respected, to be heard, and to no longer be invisible.”

I watched, with genuine emotion and pride in our country, ladies born before women had the right to vote cast their

ballot for Clinton, then be lumped in with the rest of the women who were voting with their vaginas. At the same time I read African-Americans only a few generations removed from segregation talk about how moving it was for them to cast a vote for Obama, and saw many black superdelegates who had supported Clinton for years simply switch their allegiance, yet never be accused of “voting race.” I read story after story about how the popular vote didn’t matter anyway, because the coming tidal wave of superdelegate endorsements would put Obama over the top. How she might as well just drop out now and stop all this nonsense. I was still waiting for that tidal wave of endorsements Tuesday night when Obama staggered across the finish line, at the last possible second, as the last votes were being tallied in the last states to hold their primaries. This is a mandate?
For weeks I’ve listened to Clinton be accused of tearing the Democratic party asunder — of damaging democracy

itself — by winning. I’ve heard her viciously criticized for attempting to deny Obama, so clearly a special, once-in-a-lifetime candidate, his destiny by being obstructionist enough to win as many, and often more, votes as he. I watched TV pundits driven to near-maniacal ranting because Clinton had the astounding arrogance to inspire as many people to believe in her ability and experience as believe in Obama’s magical historical mandate. Was that sexism, or just politics? I’m not sure, but I do know that Keith Olbermann can bite me. MORE