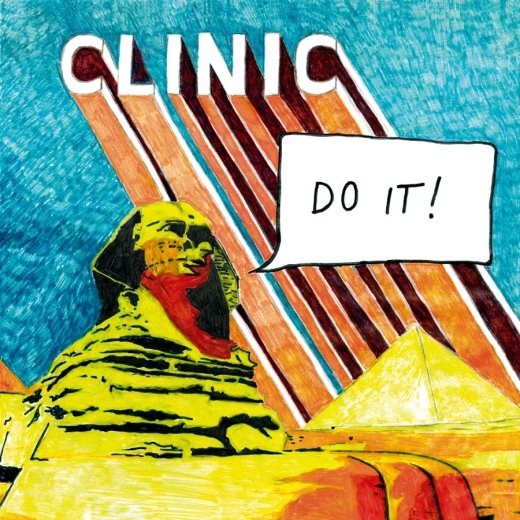 Now playing on Phawker Radio! Well, TURN IT UP!

BY ED KING ROCK SNOB An appealing sense of revenge and antisocial impulses run through the music of Clinic, the surgical masked quartet from Liverpool that’s been making pretty much the same passively sinister album since their first long-player in 1999. On Do It! the band does it again, and why not? Every psychological horror movie is worth a sequel or four. Do fans of The Omen series bother complaining that the third installment was not as good as the first one? I think not. Such films work within a narrow frame and provide a balance of tingles and giggles. As children of children of the damned, Clinic work their mystic garage magic within the pentangle.

Do It! opens with the Satanic skiffle of “Tomorrow”, which sounds like Donovan fronting Psychic TV. Singer Ade Blackburn‘s acidic tone recalls Malcolm McDowell‘s Alex character from A Clockwork Orange. Alex and his droog buddies would have gotten off on new Clinic songs like “High Coin” and “The Witch (Made to Measure)”, the latter with it rumbling beat, spring-reverbed guitar riff, droning melodies, muted cries from the attic supplied by organ and backing vocals. If you’ve got a chip on your shoulder but are not the type to outright kick some ass in the traditional rockin’ dude sense, Clinic’s music provides a soundtrack for your stunted idea of “acting out.” Trust me.

For all my rock snob life I’ve been hearing how great The Fall is. [The Fall is really great! –The Ed.] I’ve never bought it. “Shopping Bag” is how The Fall would sound if they lived up to the conventional wisdom of record store geeks. I listen to Do It! and wonder how much misery deceased Joy Division producer Martin Hannett might have had with this band. What’s cool about Clinic, however, is how they manage to keep things light and garagey on the surface while cooking up whatever strange brew they’ve got under the lid. Where Echo and the Bunnymen would have hammered and yelped a song like “Winged Wheel” into submission, Clinic’s measured approach is a sly grin that threatens to wreak more psychic havoc than anything The Cutter might inflict.