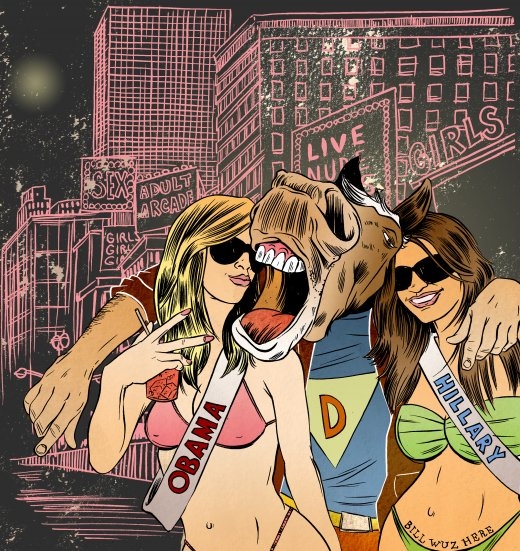 BY JONATHAN VALANIA Talk about a confederacy of yutzes: Harris Wofford, bless his heart, has completely lost it, and I am not just talking about his voice, which was in short supply when he took the lectern to introduce the guy who would introduce the guy who would introduce Barack Obama; next up, Chaka Fattah is hands down the LEAST inspiring speaker I have ever had the displeasure of suffering through; and Bob Brady is a great party cheerleader, and the guy you want doling out the patronage goodies, able to keep a vast running ledger of favors owed and favors returned in that large, white-tufted skull of his — which makes him a distinctly 20th Century big city machine politico, and a fish out of water in the 21st Century, where they longer make replacement parts for big city political machines.

Fueled by an open bar, the room roared with the din of the fat, the corrupt and the contented as they sat around literally having their cake and eating it too while waiting for Obama, who was running nearly an hour behind schedule. The din only partly subsided when Obama finally took the stage and delivered a fiery and rousing greatest hits rendition of his stump speech. And still, people all around yammered all the way through Obama’s speech — TALKING LOUD and SAYING NOTHING — at times rendering the candidate inaudible, even though he was practically shouting into the microphone. As a result the crowd seemed to miss most of the obvious applause lines. It got to the point where I had to violate the prime directive of journalism — ‘thou shall not directly change the course of events on other planets’ — and tell the people around me (politely at first, then less so) to shut the fuck up. Corrupt and contented, indeed. If only they had actually listened what Senator Obama had to say, they might have sobered up and realized that his very presence in this room — much like the election of Michael Nutter — means the SELL-BY date on their kind of Dem has expired. Enjoy yourselves, it’s later than you think.

RELATED: Democratic candidates and political celebrities Barack Obama and Hillary Clinton greeted the foot soldiers of Philadelphia’s Democratic Party last night with praise and inspiration – but no money. Neither campaign will be making traditional payments, known as “street money,” to ward leaders willing to support them on election day, and some are unhappy about it.”We’re not going to pay for votes or pay for turnout,” Obama told the Daily

News yesterday before speaking to hundreds of ward leaders and committeepeople at the party’s pre-election day fundraiser. Ward leaders use street money to pay party committeepeople to work their voting divisions on election day and sometimes for other expenses, including meals, transportation or for hiring extra workers. Former city councilman and ward leader Ed Schwartz said that street money doesn’t deserve the seedy connotation it has among political reformers. He said it funds something valuable for the party and communities in the city. He recalled working hard and getting a 90 percent turnout in his voting division for Jimmy Carter in 1976.”They weren’t voting for Jimmy Carter, they were voting for themselves and me,” Schwartz said, “because I would tell them, ‘Your vote determines your value to the political system.’ “Asked if committee people had to be paid to work for a candidate they believe in, Schwartz said, “People feel if a candidate is willing to pay millions of dollars for a TV ad, they ought to be willing to pay a hundred dollars for somebody really trying to get the vote out. It’s a dignity thing.” MORE RELATED: John J. Dougherty – union leader, power broker, state Senate candidate – stood outside city Democratic headquarters in Center City last week, all smiles as he talked to supporters, nodded to passersby, and exchanged greetings with a police officer. Two years after being forced out as party treasurer after a dispute with U.S. Rep. Bob Brady, the party chairman, Dougherty had returned to the fold. After hearing primary opponent Larry Farnese denounce Dougherty as a “thug” and a turncoat, First Senate District ward leaders voted, 11-5, to endorse the electricians union leader. MORE

RELATED: The city Ethics Board is investigating whether state Senate candidate John J. Dougherty‘s union was behind an anonymous 2007 mayoral primary campaign flyer that said a vote for Michael

Nutter “is a vote for racial profiling.” The flyer featured a photo of Black Panthers being strip-searched by police in the 1970s and read: “Welcome to the Reality of Mike Nutter’s ‘Stop and Frisk.’ ” About 125,000 copies were distributed in North and West Philadelphia on primary day, the board said in court papers filed yesterday. The board has asked the court for an order to prevent the destruction of computer files, including e-mail or communications between the political consultant who admitted designing the flyer and Dougherty and two other union officials. Dougherty, business manager of Local 98 of the International Brotherhood of Electrical Workers, supported Tom Knox in the Democratic primary. Under state law, it is illegal to distribute campaign literature without identifying the source of the funding.

NEW YORK TIMES: The tabloid-format satire, “My Wall Street Journal,” mostly sets out to skewer The Journal’s new owner, the News Corporation, and its chairman, Rupert Murdoch, with swipes at News properties like Fox News, The New York Post and The Journal itself. It takes aim at other targets, too, including Wall Street firms and traders, and assorted politicians and pundits.

It was not supposed to go on sale until this week, but some newsstands began selling it early. Last Thursday, Alexander Laurence was working at one such stand in Los Angeles, chatting with a customer, David Metz, when, both of them say, a man in a shirt with a Journal logo asked if anyone had seen a paper that looked sort of like The Journal.

“This guy comes by all the time to bring promotional stuff for The Wall Street Journal — bags, coin trays, stickers,” Mr. Laurence said.

Sure enough, they found what he was looking for. “He grabbed them all, said, ‘I need to buy all of these,’ ” Mr. Laurence said. “He had been going around to different stands, buying them.” The man paid with a corporate American Express card. “At first he’s saying they have to make a correction or it’s not supposed to be out yet,” Mr. Metz said. “But then he said these are not published by The Wall Street Journal.” MORE