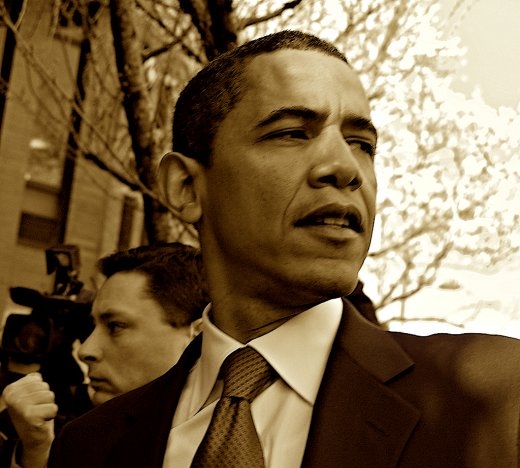 Sen. Barack Obama, on his way to address a union audience in Philadelphia this morning. [photo by MASTERCHEF28]

BY NICK POWELL CAMPAIGN CORRESPONDENT Obama addressed the AFL-CIO at a Center City Sheraton this morning, and judging by the roaring cheers and Holy Ghost shrieks, one would have thought that Barack Obama had already saved our sagging economy, brought the boys home from Iraq and ended racism as we know it. Speaking to a major pow-wow of union workers, the effervescent U.S. Senator fired up his base, dissed his own bowling skills, discussed the Rocky comparisons, and drew a line in the sand between himself and his Republican and Democratic rivals.Despite what he described as a poor showing in the lanes, he promised to “tear up the bowling alley in the White House.”All joking aside, the theme of Obama’s speech, and increasingly the hot-button issue of the election itself, is the growing concern with the failing economy. He attacked both President Bush and the presumptive Republican nominee, Sen. John McCain, for ignoring the working families that were in attendance in favor of the moneyed

elite.“John McCain said a few weeks ago that he didn’t understand the economy as well as he should, and that’s clear,” said Obama to laughter and applause. “Like George Bush, Sen. McCain is committed to more tax cuts for the rich and more trade agreements that fail to protect American workers.”Obama took a slightly more subtle shot at his Democratic rival, Sen. Hillary Clinton: “Now I know there’s been some talk about Rocky Balboa over the last couple days, but the last time I checked I was the underdog in this state.” It is worth pointing out to both candidates however, that not counting the numerous sequels, Rocky lost the fight. Obama went on to describe the particular flaws of our recessing economy, such as flattening wages and income, our dependence on foreign oil, and asserted that the war in Iraq — which is costing the country $10 billion per month — is further crippling the country. “If we can spend ten billion dollars in Baghdad, I know we can spend it here in America,” he said. Change, which has been the overarching theme of Obama’s campaign, was front-and-center today as well. Obama expressed his desire to change the landscape of Washington politics, highlighting the fact that he is the only candidate who “hasn’t taken a dime from Washington lobbyists,” a claim the Clinton campaign disputes. In addition, Obama said he is working with Senator Robert Casey to extend unemployment insurance, and that he also wanted to give the middle class a tax cut that could save families up to $1,000 a year. He also proposed eliminating income tax for seniors with incomes under $50,000 a year; both proposals would signal a radical shift from Bush administration policies.Obama also proposed a $4,000 college tax credit for those said willing to do community service. Speaking on the proposed Colombian Free Trade Agreement, which would open up trade lines between the U.S. and the South American country notorious for its violence and drug trafficking, Obama came out fully against it, saying he would instead push for the passing of the Patriot Employer Act. That measure provide tax credits to companies that hire workers in the U.S. as opposed to overseas.

Obama finished his speech by doing his best John Lennon impression: “Imagine a President whose life story is like so many of your own, who knows what it’s like to go to college on student loans, and see his mother get sick and worry that maybe she can’t pay the medical bills.” He continued, “Imagine a Washington where your voice will be heard before any legislation is signed to law.”Some audience members said they appreciated Obama’s imagination. Catherine E. Stafford, a federal government employee, said she was voting for Obama because, “I like change. He spoke to me on health care and the economy.” Mary Dunne, a member of the UFCW, which has endorsed Obama, echoed this sentiment, while pointing out that Obama has what Clinton lacks.“I actually am a former Hillary Clinton supporter, but after hearing Obama speak I just think he would bring a fresh approach,” she said. “I’m afraid that Hillary would get bogged down in the same bureaucracy and I think that he’s gonna make a fresh change.”

Nick Powell is a journalism student at Temple University

they covered Obama as a father-and-son outing. Isn’t that just the cutest thing you ever heard? Here’s what Pops Powell had to say…

PHILADELPHIA — Her whole campaign was a $82 million-or-so gamble, the girl from the back streets of Park Ridge, Ill., comin’ to Philly. The Wasp Filly was taking those stairs three at a time, getting ready for the primary slugfest in late April.

But Obama, he doesn’t think so much of her reverie, not least because Rocky Clinton is ahead, not behind, in the polls here. So he went to the A.F.L.-C.I.O. convention in Philadelphia today, and let the union brothers and sisters in on her secret.

“I know there has been some talk about Rocky Balboa over the last couple days,” he says with a smile. “And, y’know, we all love ‘Rocky’”

“But we’ve got to remember that ‘Rocky’ was a movie.” MORE