STAR-TELEGRAM: DALLAS — Security details at Barack Obama’s rally Wednesday stopped screening people for weapons at the front gates more than an hour before the Democratic presidential candidate took the stage at Reunion Arena. The order to put down the metal detectors and stop checking purses and laptop bags came as a surprise to several Dallas police officers who said they believed it was a lapse in security. 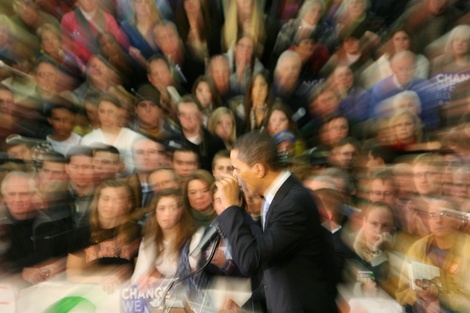 divisions, said the order — apparently made by the U.S. Secret Service — was meant to speed up the long lines outside and fill the arena’s vacant seats before Obama came on. “Sure,” said Lawrence, when asked if he was concerned by the great number of people who had gotten into the building without being checked. But, he added, the turnout of more than 17,000 people seemed to be a “friendly crowd.” The Secret Service did not return a call from the Star-Telegram seeking comment.

Doors opened to the public at 10 a.m., and for the first hour security officers scanned each person who came in and checked their belongings in a process that kept movement of the long lines at a crawl. Then, about 11 a.m., an order came down to allow the people in without being checked. Several Dallas police officers said it worried them that the arena was packed with people who got in without even a cursory inspection. They spoke on condition of anonymity because, they said, the order was made by federal officials who were in charge of security at the event. “How can you not be concerned in this day and age,” said one policeman. MORE

JOHN MCCAIN IS OFFICIALLY FUCKED: Within hours of the article’s publication, McCain sought to turn it to his advantage, sending out a fundraising appeal decrying the “baseless attacks” and urging contributions. “With your immediate help today, we’ll be able to respond and defend our nominee from the liberal attack machine,” McCain’s campaign manager, Rick Davis, said in an e-mail.

But McCain’s attempts to build up his campaign coffers before a general election contest appeared to be threatened by the stern warning yesterday from Federal Election Commission Chairman David M. Mason, a Republican. The nation’s top federal election official told Sen. John McCain yesterday that he cannot immediately withdraw from the

The implications of that could be dramatic. Last year, when McCain’s campaign was starved for cash, he applied to join the financing system to gain access to millions of dollars in federal matching money. He was also permitted to use his FEC certification to bypass the time-consuming process of gathering signatures to get his name on the ballot in several states, including Ohio.

If the FEC refuses McCain’s request to leave the system, his campaign could be bound by

a potentially debilitating spending limit until he formally accepts his party’s nomination. His campaign has already spent $49 million, federal reports show. Knowingly violating the spending limit is a criminal offense that could put McCain at risk of stiff fines and up to five years in prison. MORE

WASHINGTON POST: [W]hen McCain huddled with his closest advisers at his rustic Arizona cabin last weekend to map out his presidential campaign, virtually every one was part of the Washington lobbying culture he has long decried. His campaign manager, Rick Davis, co-founded a lobbying firm whose clients have included Verizon and SBC Telecommunications. His chief political adviser, Charles R. Black Jr., is chairman of one of Washington’s lobbying powerhouses, BKSH and Associates, which has represented AT&T, Alcoa, JP Morgan and U.S. Airways. Senior advisers Steve Schmidt and Mark McKinnon work for firms that have lobbied for Land O Lakes, the UST Public Affairs, Dell and Fannie Mae. […] Public Citizen, a group that monitors campaign fundraising, has found that McCain had more bundlers — people who gather checks from networks of friends and associates — from the lobbying community than any other presidential candidate from either party.

PLAGIARISM IS THE NEW BLACK: Separated At Birth?

“What’s not at stake are any of us. All of us are going to be just fine no matter what happens in this election. But what’s at stake is whether America is going to be fine.” –John Edwards, during the December 13 debate

“You know, whatever happens, we’re going to be fine. You know, we have strong support from our families and our friends. I just hope that we’ll be able to say the same thing about the American people. And that’s what this election should be about.” — Hillary Clinton, last night