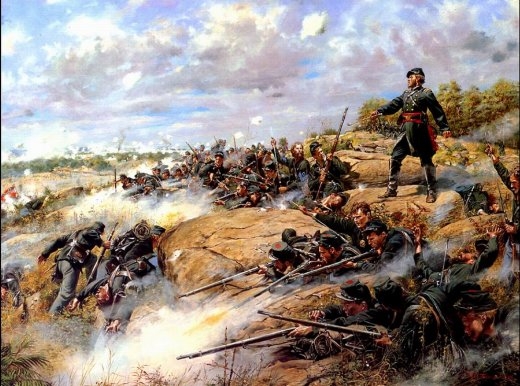 Historian Drew Gilpin Faust writes that Civil War deaths — both their number and their manner — transformed America. Her new book is This Republic of Suffering:Death and the American Civil War. The Civil War death rate was six times that of World War II, when adjusted against the size of the American population, Faust points out. “For those Americans who lived in and through the Civil War, the texture of the experience … was the presence of death,” she writes. “At war’s end this shared suffering would override persisting differences about the meanings of race, citizenship, and nationhood to establish sacrifice and its memorialization as the ground on which North and South would ultimately reunite.” Faust is the president of Harvard University, where she also holds the Lincoln Professorship in History. ALSO, two million patients get bacterial infections from health-care workers each year. Nearly 100,000 of them die as a result. Dr. Richard Shannon argues that those infections — and deaths — are preventable. Shannon’s work on patient safety was featured in the PBS documentary Remaking American Medicine; he teaches at the University of Pennsylvania School of Medicine, where part of his job involves working with colleagues at the Wharton Business School to demonstrate a business case for quality health care.

Hour 1
(Rebroadcast tonight at 11)
Analysis of the NH Primary results. We’ll first check in with ANDREW SMITH a New Hampshire pollster with the University of New Hampshire Survey Center. His organization does the NH polling for CNN. Then we’ll hear a liberal/conservative take on the results from CHRISTOPHER HAYES, the Washington DC Editor for The Nation and JIM GERAGHTY who writes the Campaign Spot blog for National Review Online. Listen to this show via Real Audio | mp3
Hour 2
A conversation with writer DAVE EGGERS, about his book, What is the What, which is the 2008 “one book, one Philadelphia” selection. It is the fictionalized story of the life of Valentino Achak Deng, one of the Sudanese Lost Boys. Listen to this show via Real Audio | mp3

David Dye welcomes John C. Reilly, star of Walk Hard: The Dewey Cox Story, to the World Café. Over the years, Reilly has earned acclaim as both a serious and comedic actor, and in the new movie both talents help bring Dewey Cox, the over-the-top fictitious rock legend, to life. Accompanied by backing band, The Hard Walkers, he recorded all of the songs from the movie’s original soundtrack. With his embellished delivery of songs like “Weeping” and “Guilty As Charged,” Reilly delights as much as a musician as he does as an actor.