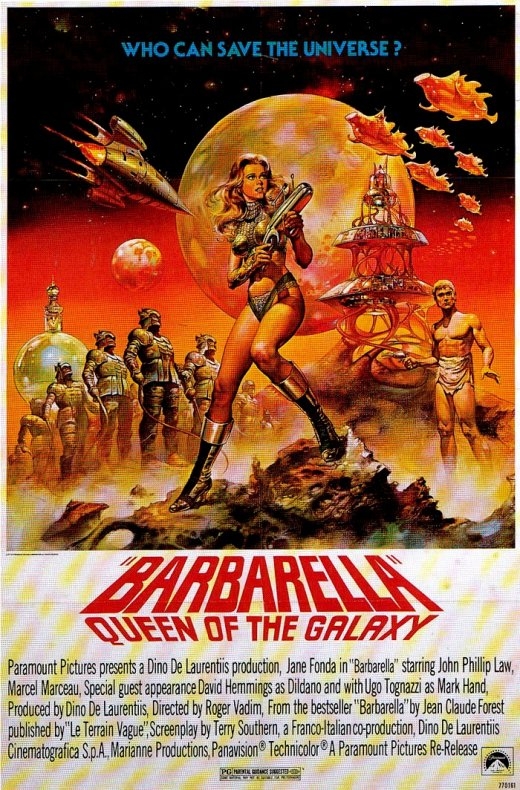 BY MATTHEW DADDONA When director Robert Rodriguez announced in May of 2007 that he would take on Roger Vadim’s 1963 cult sci-fi classic Barbarella, the rumors about who would play the title role circled the globe faster than an orbiting satellite. Jessica Biel, Rose McGowan, Lindsay Lohan and even Beyonce Knowles were all attached, or rumored to be attached, at some point. Barbarella turns 40 in 2008, and since 40 is the new 30, she’s holding up pretty well, not that anyone ever expected more from her than a few stoned laughs and a half-dozen hard-ons. Luckily for us, Rodriguez is on board for the re-make. If his riveting adaptation of Frank Miller’s Sin City is any indication, there’s hope he will do for psychedelic intergalactic orgies what he once did for gothic noir splatter: Make it sing.

After all, the original version of Barbarella was adapted from a comic as well. It was Jean-Claude Forest’s cheeky adult comic strip that laid the groundwork for the peekaboo spectacle of a then-29-year-old Jane Fonda writhing balletic through a zero-gravity strip tease during the film’s opening credits. If this does nothing more than establish the ruby-haired sex-bomb potency of Fonda’s Barbarella, I’m not complaining. And it’s not just a guy thing. Barbarella is a 21st Century gal, traveling through space unchaperoned, eschewing old school coitus for a sex-pill substitute, changing outfits like its her job, and ultimately being in charge of her gravity-free hyper-sexuality and not afraid to use it. Over and over and over again. Sigh.

The story, as much as there is one, traces Barbarella’s fantastic journey to the rival planet, Sogo, in order to find

and stop the mad scientist Durand-Durand (yes, Virginia, that’s where they got the name) from destroying the universe with his ‘positronic ray’. Further complicating things is the Magmous, an evil presence that surrounds the planet and appears in the form of a huge lava lamp. Along the way she encounters Pygar, an astonishingly handsome angel whom she promptly shags; Marcan, a barbarian savior who shows her the old fashioned, non-pharmaceutical way of loving; and the Great Tyrant, an evil lesbian queen who can blur the line between fantasy and reality in her ‘dream chamber.’ Later she takes on the Excessive Machine, a sex organ which drives victims to death through excruciating pleasure — controlled by none other than that horndog madman Durand-Durand — and WINS!

Vadim’s shagadelic portrait of a sexually superior woman is so exaggerated as to become high-camp, not to mention a bottomless fount of future Austin Powers jokes. In an interview earlier this year, Rodriguez expressed his abiding love for Barbarella’s character and what she represents. The original movie’s 1968 producer, Dino De Laurentiis has come on board to produce the remake, along with Casino Royale writers Neal Purvis and Robert Wade. Sometimes, however, a scantily-clad girl, a raygun and a dildo-shaped spacecraft is all you need.

ABOUT THE AUTHOR: Matthew Daddona is a freshman journalism major at Temple, although he is now seriously considering becoming an astronaut.