First a note of justification. I’m about to say a few words about Hunter S. Thompson, the writer, in what is ostensibly a column about music because: a) HST was rock ‘n’ roll incarnate; we’re talking balls the size of cantaloupes. b) Despite the pharmacopia of substances controlled and otherwise he ritually pickled his gray matter in, he was in possession of one of the sharpest minds of the 20th century, possibly even up until he personally disconnected it with a gun to his head. c) I just happen to be hiking in the Rockies.

Which is why I’m writing this from a patio table at the Woody Creek Tavern. Located a stone’s throw from HST’s Owl Farm, this was Thompson’s semiprivate watering hole, and I’m knocking back a few too many Flying Dogs, a tangy local microbrew with quite literally eye-popping label art by HST illustrator Ralph Steadman. As the sun drops behind the purple mountains, Christmas tree lights twinkle into incandescence on the umbrellas overhead and a folksinger warbles harmlessly over in the corner.

HST’s widow is sitting at the next table. She discusses Dylan selling Live at the Gaslight at Starbucks with her dinner companion. I apologize for the intrusion and tell her I just wanted to let her know I’ve come from Philadelphia to pay my respects. She seems a little gunshy … er, poor word choice. Nonetheless, she’s gracious, grateful and probably younger than I am. So we leave it at that, and I go off in search of the signed affidavit wherein HST promises the proprietors of the Woody Creek Tavern to never again set off a smoke bomb in the bar. It’s supposedly hanging on one of the walls, somewhere in the dense mosaic of HST paraphernalia and tippling snapshots of less famous habitues. 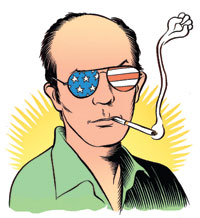 On the night of HST’s funereal moonshot, at the moment of ignition, they played “Mr. Tambourine Man,” but they should have played Hendrix’s “Star-Spangled Banner,” because the man clearly earned his stripes. He was a lot of things, most of them genius or at least ingeniously funny, or true in their lies, and all of them dangerous — often to himself, sometimes to others, but always to the status quo. Chaos was the ace up his sleeve, the reason God made fire extinguishers.

But above all things, he was a great American. He was part of the Great Days — before the wave broke and rolled back. A time already long past when Jack Nicholson declared in Easy Rider, “You know, this used to be a helluva good country.” And if HST couldn’t quite remember that time after years of unbuttoning his peyote mind, he could at least envision it. And he would light his hair on fire and bray to the moon every day it ceased to exist — up to a point. Eventually you just say, “Fuck it. Let’s go to the bar.”

The final years were sodden and fallow, save for a fairly exhaustive closet cleaning, wracked with infirmity after the better part of 67 years of abuse. With his great red shark of a legend burnished and looming, he seemed aware for some time his best work was behind him, that he was a man for his season, and that season had passed. He went out in a blaze of self-inflicted glory, his atomized DNA snowing down on pastures where the buffalo roam. I never did find that affidavit, but nowhere was heard a discouraging word as the crescent moon set on the ridge like a smile over Woody Creek. — JONATHAN VALANIA, August 24th 2005