BY DAN BUSKIRK FILM CRITIC First time director Jonathan Furmanski deserves kudos for shining a dirty light on the weird world of the lascivious 1970s proto-rapper Blowfly in a new documentary so deep it peripherally captures something important about the weird world in which we all live. Nobody could be Blowfly all the time. The costumed sex fiend’s secret identity is Clarence Reid, a cornerstone player of the dance music hit machine that came out of Miami in the early 1970s. Reid wrote tunes and acted as a talent scout and producer at the Weird World family of labels, working with KC and the Sunshine Band and writing a pair of ubiquitous hits, Gwen McCrae’s lilting “Rocking Chair” and Betty Wright’s sassy, finger-wagging “Clean Up Woman.” The royalties from Beyonce’s 2006 hit “Upgrade U” (which sampled Reid’s “Girls Can’t Do What The Guys Do”) alone should have guaranteed the lifetime musician a comfortable existence but Reid sold his songwriting catalog for a song in the 1990s to escape debt. Now, at the age of 69, the former hit-maker is living off a $600 monthly social security check.

Tom Bowker, a Miami journalist and part-time musician wrote a profile on Reid in 2003. When he found out that he was not currently performing, Bowker put together a band for Reid, inserting himself as his drummer and manager. While Reid has been forgotten as a performer, it was his alter-ego Blowfly that still drew a crowd. Since 1971, Blowfly has released over 20 X-rated party records, all loaded with an over-run toilet’s-worth of lurid sexual and scatological musings. Each features the filthy-living Blowfly on the cover, cavorting with naked ladies in his cape and cowl, and each sports titles like Porno Freak and Blowfly Does XXX-Mas. Today, Reid looks every bit of his age, but on-stage as Blowfly he comes to life, joking, rapping, singing, and telling surreal and lurid stories with the enthusiasm of a sex-starved teenager. 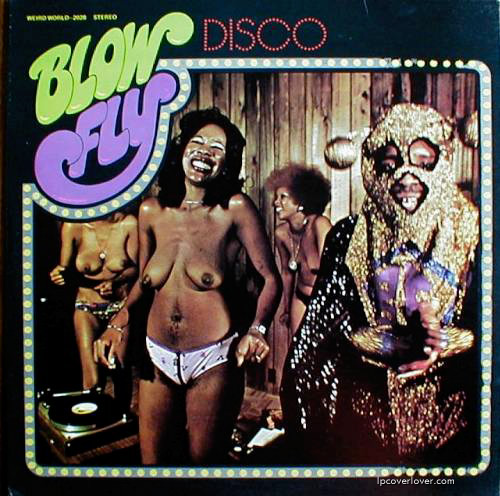 captures a telling picture of America in our time. Just the fact that a man who has been so productive in his life, both economically and artistically, should be scraping by as a pauper is a detail that shouldn’t go unnoticed. Blowfly’s manager Bowker is dedicated to the capitalist dream but despite his hard work he admits that the Blowfly show — with its live funk band, costumes, props, and nude dancers — runs at a steady financial loss. As the fiscal pressure builds, Bowker vents on Reid (never feels good to see a senior citizen bawled out) and looks for new ideas to make the Blowfly brand thrive. An attempt to cut costs by having Blowfly rap with a mummy-masked Bowker over pre-programmed beats (“Mummy-Fucker!”) appears to be an artistic disaster. By the end we’re hearing positive testimonials about Reid’s legacy from Ice-T and Chuck D, meanwhile the man’s current state appears sadly precarious. Blowfly is definitely one of the 99%.

Though darkness does hang over Blowfly’s weird world, the cathartic, terribly incorrect performances give the story an air of glee, too. Changing “Should I Stay or Should I Go” to “Should I Fuck This Big Fat Ho” in front of a crowd of thousands, Reid has lived to see his perverse creation go from something unmentionable to a nostalgic icon edging ever-closer to the mainstream. And considering Blowfly’s mother is still around to cheer him on, this masked pervert may not be through drooling about the dirty deed just yet.