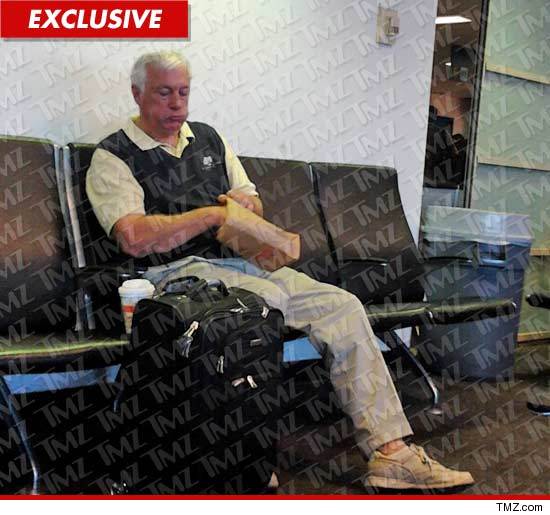 PHAWKER: How is this guy allowed to get on an airplane? Is he not flight risk incarnate? Hang on, this just in…

NEW YORK POST: The judge who freed alleged Penn State kid-sex fiend Jerry Sandusky on bail — with no strings attached — is a volunteer with the charity Sandusky mined for victims, it was reported last night. The explosive news came as Pennsylvania Gov. Tom Corbett warned that there are likely more young men out there who were allegedly abused as children by the ex-assistant coach. Pennsylvania district Judge Leslie Dutchcot ignored prosecutors’ request for $500,000 bail — and an electronic ankle bracelet — for Sandusky, instead freeing him on $100,000, according to the Web site Deadspin. Dutchcot — who volunteers for the Second Mile children’s charity, as well as organizations such as the American Heart Association — ordered that Sandusky “pay nothing unless he failed to show up for a court hearing.” MORE

THE NATION: I agree with the Washington Post’s Mike Wise, who wrote, “They would all be party to a worse crime than any crooked, pay-for-play booster at Miami, Ohio State or even SMU ever committed: guilty of protecting a program before a child.” But at the same time I would argue that the connective tissue between benign booster scandals and this monstrous state of affairs are more substantial than people want to admit. It’s connected to the Bowl Championship Series, “conference realignment” and all the ways in which college football has morphed over the last generation into a multibillion-dollar big business. This isn’t about Sandusky. This is about about a culture that says the football team must be defended at all costs: a culture where the sexual assault of a 10-year-old is reported to Paterno before the police. This is what happens when a football program becomes the economic and spiritual heartbeat of an entire section of a state. The Nittany Lions football regularly draws 100,000 fans to Happy Valley. They also produce $50 million in pure profit for the University every year and has been listed as the most valuable team in the Big 10 conference. Another economic report held that every Penn State game pumps $59 million into the local economy: from hotels to kids selling homemade cookies by the side of the road. It’s no wonder that Paterno is revered. He took a football team and turned it into an economic life raft for a university and a region. When something becomes that valuable, a certain mindset kicks in. Protect the team above all over concerns. Protect Joe Pa. Protect Nittany Lions football. Protect the brand. In a company town, your first responsibility is to protect the company. MORE

RELATED: “All that is necessary for evil to triumph is for good men to do nothing.” — William Burke