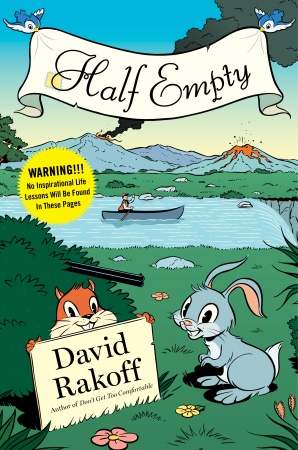 Writer David Rakoff worries a lot: about Sept. 11, about cancer, about epidemics and fame and religious devotion — not to mention sex, money, his childhood and the value of therapy. The regular contributor to This American Life even worries about writing about himself, which he does in his latest collection of essays, Half Empty. “That was the big problem for me in terms of this book,” Rakoff says. “I’ve always bridled at the term ‘memoirist’ because I always wanted to be known for the quality of my writing as opposed to the particulars of my biography — so that’s a huge worry for me.” Rakoff, who has previously written about subjects ranging from the torments of low-thread count sheets to visiting a New Age retreat hosted by Steven Seagal, turns his signature witty style to the value of pessimism in his latest collection — but, he warns, it’s a very specific kind of negative thinking called “defensive pessimism.” “The ‘defensive pessimist’ looks at everything and thinks [that] this is going to be a disaster,” he explains to Fresh Air’s Terry Gross. “They lower their expectations … and they go through all of the negative capacities and the negative capabilities of a given event. You imagine the worst-case scenario you can and you go through it step by step, and you dismantle those things and you manage your anxiety about it.” While writing Half Empty, Rakoff was diagnosed with cancer. His doctors told him that the cancer — a sarcoma in his neck — was caused by earlier radiation treatments he received for a bout with lymphoma in his 20s and could cause him to eventually lose his arm. Despite eschewing the powers of negative thinking, he remains optimistic about his treatment. “I’m currently in chemo,” he says, “The hope is that chemo will shrink [the cancer] a few millimeters so that it’s no longer touching quite so many vital cables that go down your arm and than my wonderful surgeon will be able to go in and get the tumor without taking the arm.  But, as they keep on telling me, no one dies from the arm. So there’s a lot of stuff you can do with one arm — like continue living. So my arm is in danger but for now, knock on wood, I’m not in danger which is a distinction worth making.”