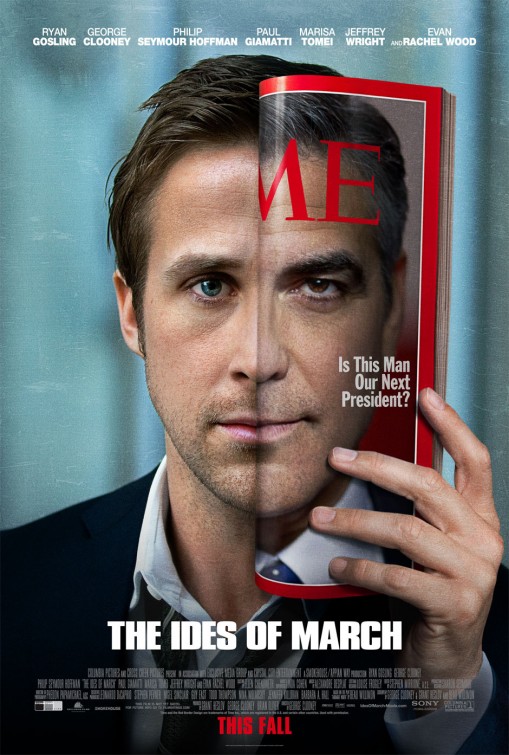 George Clooney has been quite public about his interest in politics and with 2006’s network news drama Good Night and Good Luck, he has already directed one of the best political films in the last decade. Sure, he directed the scoreless football comedy Leatherheads since then, but a full-on political drama from the actor/director sounds like a sure thing. Yet while The Ides of March, co-written by Clooney and his longtime collaborator Grant Heslov, is dependably diverting, it is also a sadly ordinary drama that foolishly seeks surprise from the unsurprisingly presence of corruption in the modern political system. Ryan Gosling makes for an effective lead but this coming-of-age tale of a up-and-coming campaign operator tells the story of perhaps the last young man in America to realize that politics is a cutthroat business.

It helps immeasurably to have Gosling as that campaign worker Stephen Myers, he can easily project the mix of charm an intelligence that leads a character to proclaim him as the “best media mind in the country.” When the confident Myers fires a young worker with the comment, “When you make a mistake here you lose the right to play” and then meets the flirty intern Molly (Evan Rachel Wood), you can imagine the snare that’s going to trap him. For such a young sharpie, he also learns some remedial political lessons about mistaking reporters for his friends (with Marisa Tomei as the mercenary journalist) and realizing that opposition’s friendly offer might have strings attached (as Myers get a schooled by the always watchable Paul Giamatti).

Curiously, the one thing that is missing in this political drama is politics itself. Myers works for a Presidential candidate, a Ohio governor named Mike Morris, played by Clooney. We see Morris in a couple clips where he speaks forcefully on ending U.S. wars and committing to green energy but those stands don’t figure into the plot, nor does Myers mention Morris’ policies as motivating his loyalty. In fact the whole drama could have been transferred to the Republican Party without any changes, That is the sort of political neutrality that is often cheered in Hollywood, but the film’s disconnect from modern political reality seems not just cowardly but a missed opportunity to add some meat to this drama. In fact, the original play written by Beau Willimon left the character of Governor Morris unseen, and in the film his presence feels superfluous.

Yet within its modest ambitions, The Ides of March will keep you engaged. Like a under-written, all-star episode of The West Wing, actors like Jeffrey Wright as a demanding potential cabinet nominee, and Philip Seymour Hoffman as a wise veteran political operative add to a cast that gets a lot of mileage out of each scene. Cinematographer Phedon Papamichael (Sideways, Oliver Stone’s W) gives the film an appropriately somber, overcast look (unfortunately rendered murky by under-lit digital projection at the critic’s screening I attended). Like some 50’s melodrama starring Gregory Peck, the film will be a perfect time-passer to watch with your parents over some future holiday, smarter than most such dramas and inoffensive enough as so not to trigger any ugly political arguments. But as political film lacking in urgency or viewpoint, The Ides of March seems too pedestrian to be a film for our times.