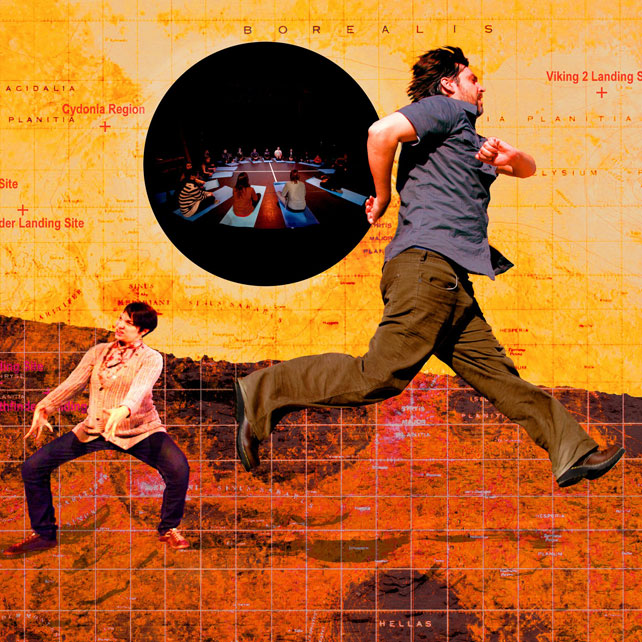 BY BRANDON LAFVING  FRINGE CORRESPONDENT “Welcome to the Jet Propulsion Laboratories 2011 Rover Driver Conference,” said the nice lady manning what looked like a conference registration table scattered with name tags. “Oh, I must be in the wrong place; where is the theater showing Red Rovers?” I said. “You’re in the right place, believe me,” she said with a smile. “Name tags are on the table.” Huh? The table was lined with name tags; each had a name in NASA font, and not one of them belonged to me. “Excuse me; there must be a mistake. My name isn’t here.” Smiling just as broadly as she had when I had first entered, my host gestured to the table again. “Choose whatever name you like. It will be yours for the duration of the conference. All your team members will be doing the same.” I could tell I needed to be slightly more flexible. So I rolled up my shirtsleeves, thumbed out a nametag, and slipped into character: Sam Dallas, member of Spirit team, whatever that was supposed mean. Headlong Dance Theater’s Red Rovers is an interactive performance inspired by NASA’s 2004 robot mission to Mars. This mission sent two Rovers, Spirit and Opportunity, to the surface of the Red Planet to collect samples and take photographs. The “conference”/dance performance was designed to inform the base team of the loss of radio contact with Spirit, and also help to ease the team’s subsequent grief. In the process, the show’s ultimate goal was to help the audience, ‘let go.’ Pardon the New Age verbiage. To facilitate this difficult transition, the performance demanded temporary shutdown of the frontal lobe. For most productions, this would be an egregious comment to make, but it was clearly the intent of the company. A computer desk with an Apple computer on it was suspended from the ceiling to within half a foot of the floor. Don’t ask why. White orbs littered the ceiling, spread out in haphazard disarray, eliciting astronomical sentiments without scientific understanding. Once the performance had started, communication occasionally disintegrated into a nonsensical tongue that simulated Javascript and sounded like Captain Beefheart while the action would collapse into dance sequences seemingly inspired by Donkey Kong. It was unclear whether the lead had taken a single dance class, though I suspect that walking like a video game hero took a lot of practice. Contrary to most performances, Red Rovers required its audience to stop watching and start doing. By the end, I was amazed to find myself in the center of the action, still trying to ward off the positive juju that oozed, for some reason I could not fathom, from everyone around me. I did not understand what Headlong Dance Theater had done to me; I couldn’t even tell you whether it was good. But I think it was pivotal in the emotional development of Sam Dallas.